Accessibility links
'This Is Not Humanity's First Plague,' Pope Francis Says Of Coronavirus : Coronavirus Live Updates The pope says the COVID-19 pandemic is exposing hypocrisy and misplaced priorities in the modern world, as he calls on people to remember their shared humanity.

'This Is Not Humanity's First Plague,' Pope Francis Says Of Coronavirus

'This Is Not Humanity's First Plague,' Pope Francis Says Of Coronavirus 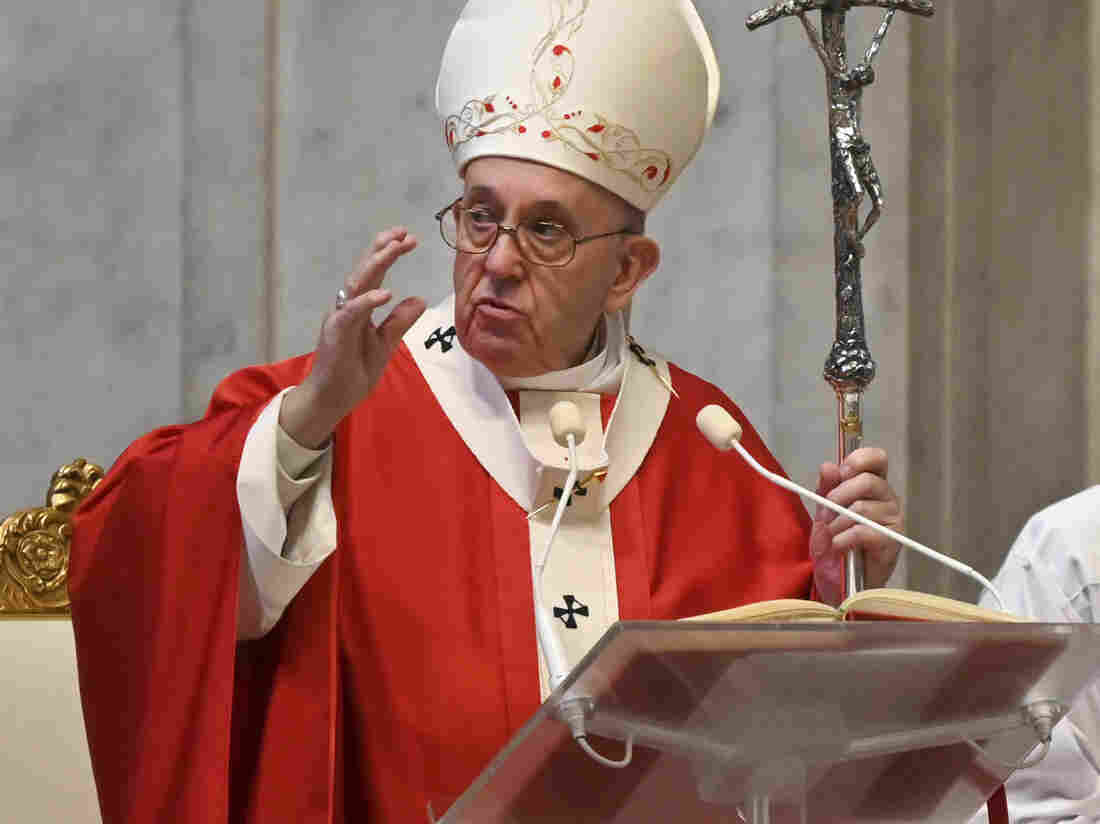 Pope Francis hailed "the saints who live next door" during the COVID-19 pandemic, saying doctors and others who are still working are heroes. The pope is seen here celebrating Palm Sunday Mass behind closed doors because of the coronavirus. Alberto Pizzoli/AP hide caption 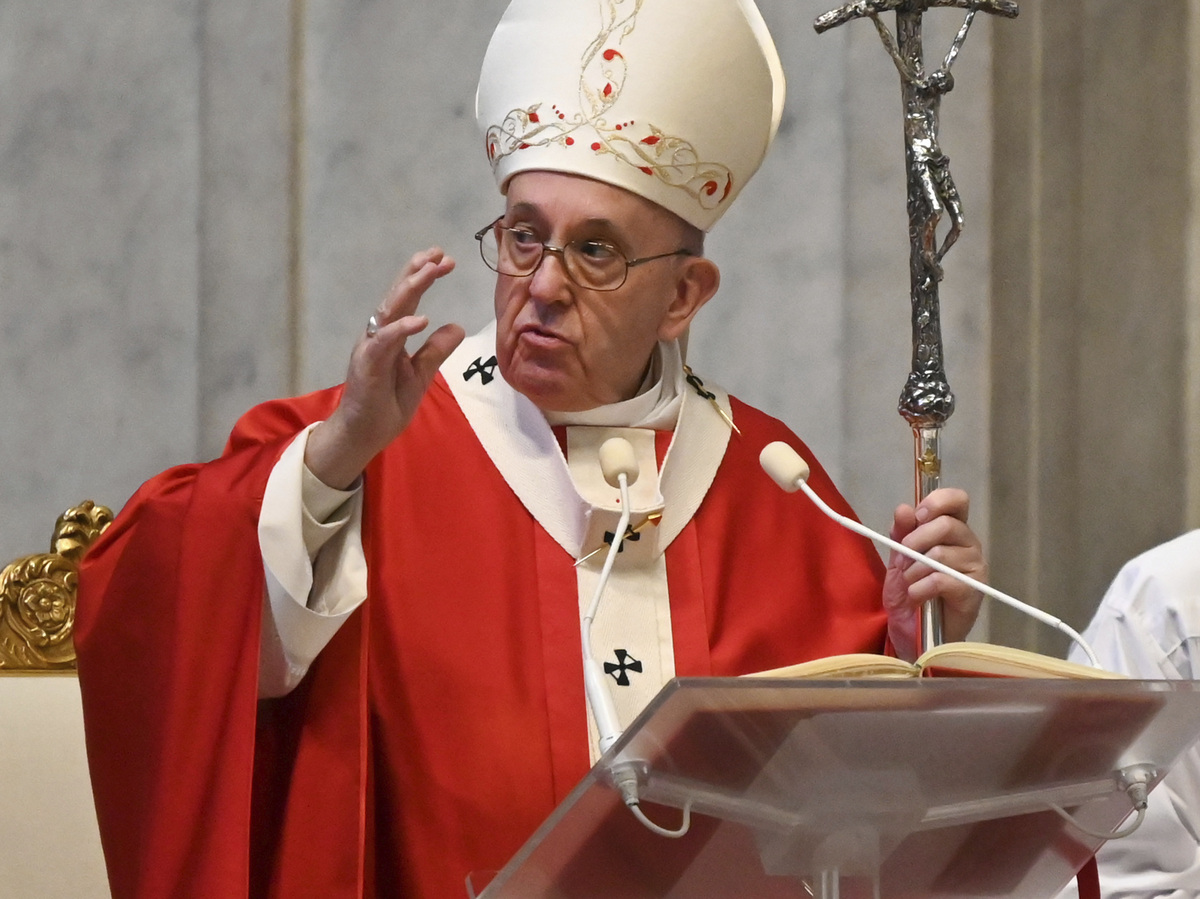 Pope Francis hailed "the saints who live next door" during the COVID-19 pandemic, saying doctors and others who are still working are heroes. The pope is seen here celebrating Palm Sunday Mass behind closed doors because of the coronavirus.

Pope Francis says the COVID-19 pandemic represents a chance for creativity and positive change, urging people to reconnect with the real world and reject "throwaway culture."

The pontiff's comments came by way of an interview with Commonweal magazine published Wednesday. Francis also said the coronavirus crisis has revealed that many decisions are made solely on economic terms; he also says the ongoing outbreak is exposing what he calls "functional hypocrisy" at the highest levels of government.

"This is not humanity's first plague; the others have become mere anecdotes," the pope said, as he called on people to remember their shared roots and traditions.

In the interview, the pope discussed aspects of the coronavirus ranging from the pope describing his life under isolation orders to praising "the saints who live next door" — the people who keep working during a global health emergency.

"They are heroes: doctors, volunteers, religious sisters, priests, shop workers — all performing their duty so that society can continue functioning," the pope said.

As for himself, the pope said, "I'm living this as a time of great uncertainty. It's a time for inventing, for creativity."

He noted that he is now livestreaming his morning Mass and other events, and that he and others in the Vatican are teleworking from their own rooms and offices. He urged others to embrace new ways of living as they adjust to quarantine and lockdown orders.

"It's not easy to be confined to your house," the pope said. "What comes to my mind is a verse from the Aeneid in the midst of defeat: the counsel is not to give up, but save yourself for better times, for in those times remembering what has happened will help us. Take care of yourselves for a future that will come."

In that future, the pope added, people should hold on to the memory of what is now transpiring — the increasing restrictions on daily life and some 1.5 million people known to be infected — and use that memory to examine their priorities.

The pope again quoted Virgil's Aeneid, saying, "forsan et haec olim] meminisse iuvabit" — which Commonweal translates as, "Perhaps one day it will be good to remember these things too."

The coronavirus has revealed the extent to which modern life is organized around money rather than people, Francis said. And he added that the crisis is driving world leaders to rush to try to save lives, even as they keep building massive arsenals.

"This crisis is affecting us all, rich and poor alike, and putting a spotlight on hypocrisy," the pope said. "I am worried by the hypocrisy of certain political personalities who speak of facing up to the crisis, of the problem of hunger in the world, but who in the meantime manufacture weapons. This is a time to be converted from this kind of functional hypocrisy. It's a time for integrity. Either we are coherent with our beliefs or we lose everything."

Francis acknowledged that some governments have "taken exemplary measures" in prioritizing people's safety over any other concern. He added, "But we're realizing that all our thinking, like it or not, has been shaped around the economy. In the world of finance it has seemed normal to sacrifice [people], to practice a politics of the throwaway culture, from the beginning to the end of life."

As an example, he cited recent reports of homeless people being isolated outdoors in Nevada.

"A photo appeared the other day of a parking lot in Las Vegas where they had been put in quarantine," the pope said. "And the hotels were empty. But the homeless cannot go to a hotel. That is the throwaway culture in practice."

Saying that every crisis brings both risk and opportunity, the pope urged people to slow down their lives, to consume less and "learn to understand and contemplate the natural world."

"We need to reconnect with our real surroundings," he said.