Accessibility links
On Fire Anniversary, Notre Dame Bell Rings But Pandemic Has Stopped Restoration Work : Coronavirus Live Updates Before France's lockdown began on March 17, around 100 workers were present at the site. Now only a security team guards the entrance. Work to clear debris was to have begun last month. 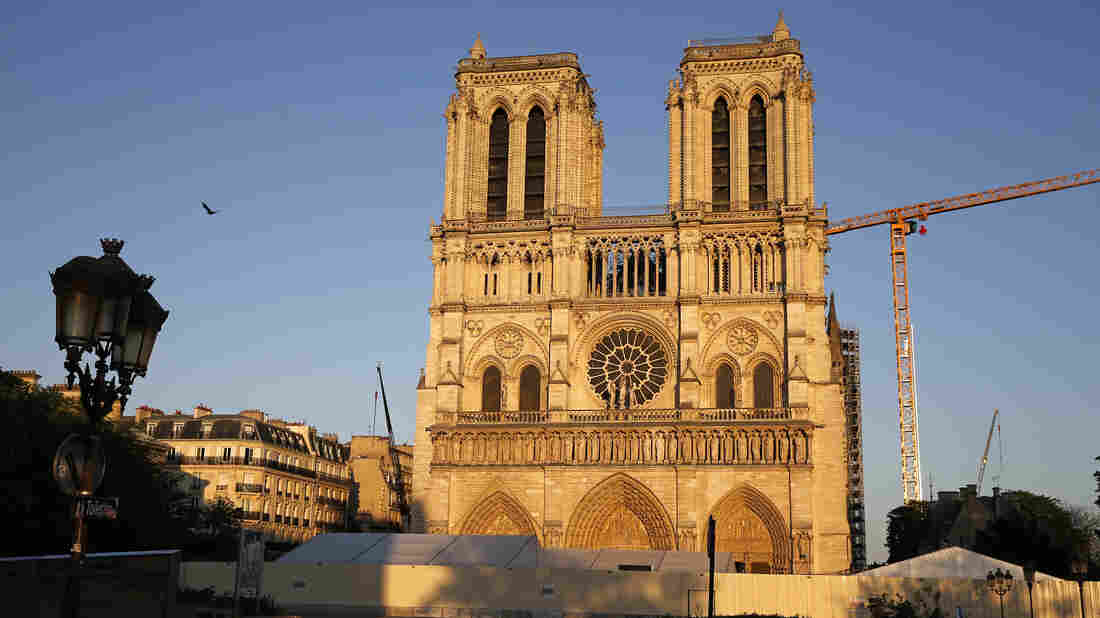 Notre Dame cathedral is seen at sunset Tuesday, after repair work stops due to the coronavirus outbreak. Wednesday marks the first anniversary of the devastating fire that destroyed many parts of the Gothic cathedral. Chesnot/Getty Images hide caption 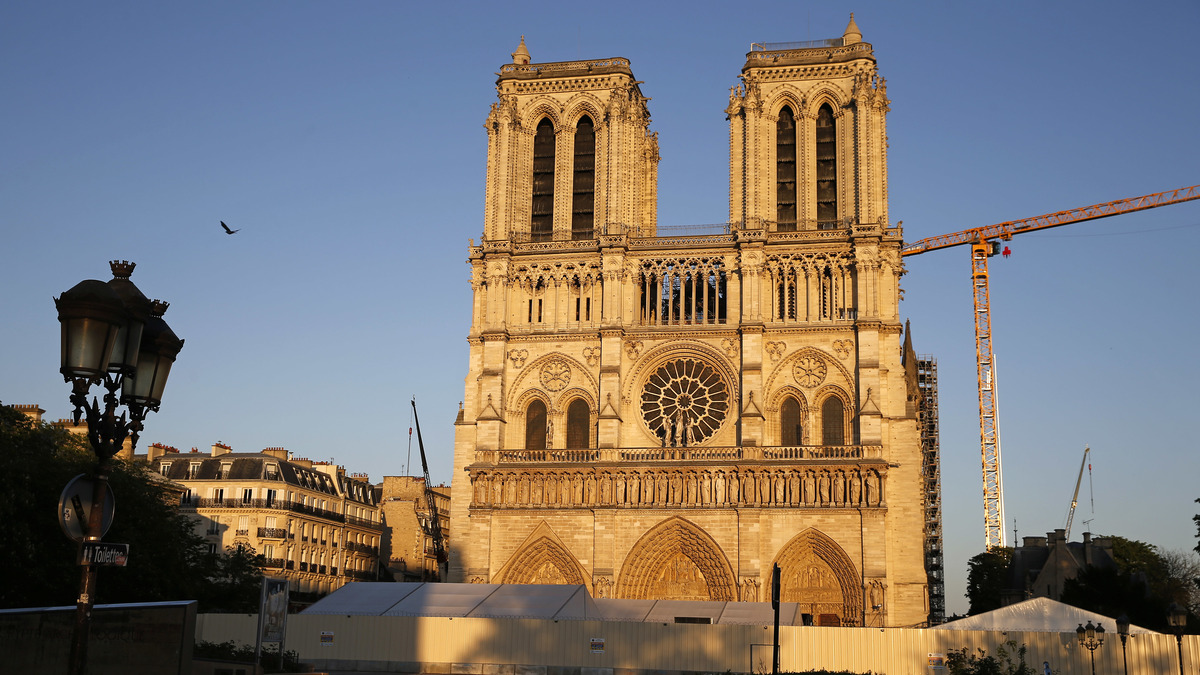 Notre Dame cathedral is seen at sunset Tuesday, after repair work stops due to the coronavirus outbreak. Wednesday marks the first anniversary of the devastating fire that destroyed many parts of the Gothic cathedral.

On Wednesday, the first anniversary of the devastating fire that ripped through Notre Dame, the famous 17th century bell in the cathedral's south tower, known as "le bourdon," rang out at 8 p.m.

Brice de Malherbe, a priest at Notre Dame, came out on the warm, sunny evening to listen to the bell toll for the first time since the fire.

"My feeling today is mainly hope because the cathedral is still there," he said. "We don't have the blazing flames we had a year ago. Of course, the cathedral is hurt, but it seems nearly serene."

Notre Dame is still in danger, but the work to restore it has come to a stop because of the coronavirus pandemic.

The construction site surrounding the cathedral stands silent. The engineers, architects, archaeologists and stonemasons are gone.

"The workers were protected from lead, but not COVID-19," Rémi Fromont, the chief architect of historic monuments, told French television on Monday. "To impose a 3-meter [9-ft.] distance between people was impossible. And the humidity would make it hard to properly disinfect."

Fromont warns Notre Dame's vaulted ceiling is still in danger of collapse. It is weighed down by 300 tons of charred timbers and mangled scaffolding soldered together by the fire. Originally in place to repair the roof, the scaffolding's twisted metal now threatens to destabilize Notre-Dame's structure, if it falls on any of the weakened walls.

The months-long task of cutting the debris apart and bringing it down bit by bit was to have begun in March, when the virus outbreak struck and France went into confinement.

Scores of motion detectors have been installed amid the rubble to detect even the slightest movement.

Jean-Louis Georgelin, the French army general appointed by President Emmanuel Macron to oversee Notre Dame's restoration, told French media the work would begin again as soon as possible, but that coronavirus protection measures would have to be assessed carefully to protect employees and experts from across France who are working on the reconstruction.

Before France's lockdown began on March 17, around 100 workers were present at the site. Now only a security team guards the entrance and officials visit once a week to make sure things are in order. On Monday, Macron extended France's strict confinement measures until May 11.

On Wednesday, the French president posted a hopeful video message on his Twitter account, saying the cathedral would be rebuilt in five years, as promised.

"The restoration of Notre Dame is a symbol of the resilience of our people and our capacity to overcome great trials," he said.

In a five-minute message, Macron thanked those who worked to save Notre Dame from the fire, those who are rebuilding the cathedral and those from around the world who donated money to save this Paris monument.

"You pave the way for better days," he said, "when we will find the joy of being together again and the spire of Notre Dame once again reaches to the sky."