Accessibility links
Families Received Form Letters From N.J. Nursing Home Where 17 Bodies Were Found : Coronavirus Live Updates An anonymous tip led to the discovery of 17 bodies at the Andover Subacute nursing facility. Families who lost loved ones say they received form letters telling them their loved ones had COVID-19. 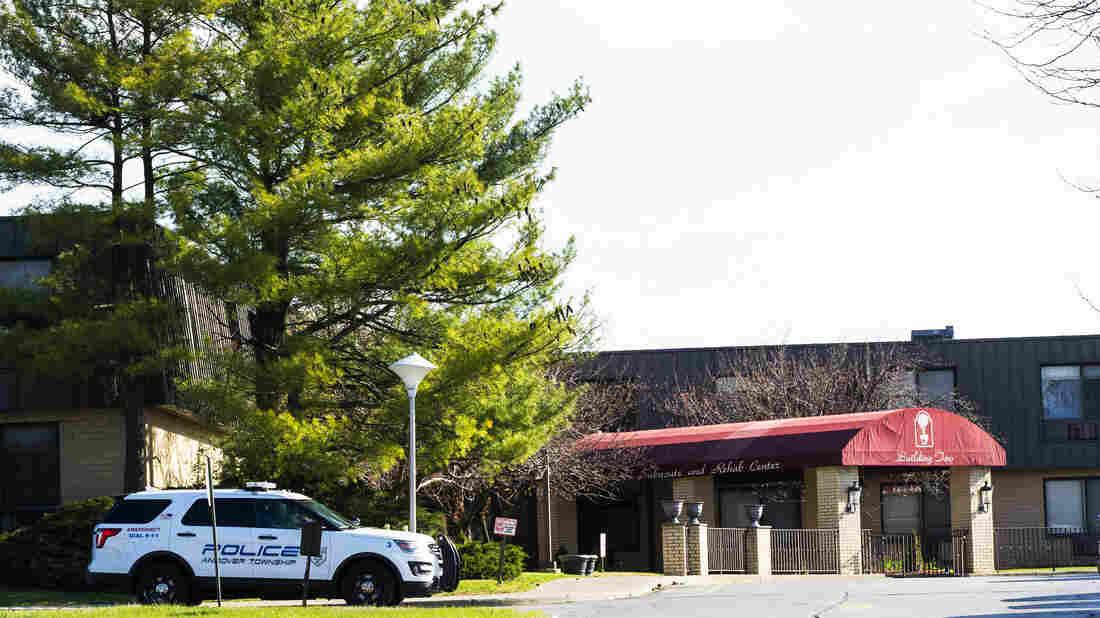 After an anonymous tip to police, 17 people were found dead at the Andover Subacute and Rehabilitation Center. Here, a New Jersey Police vehicle parks at the facility's entrance on Thursday. Eduardo Munoz Alvarez/Getty Images hide caption 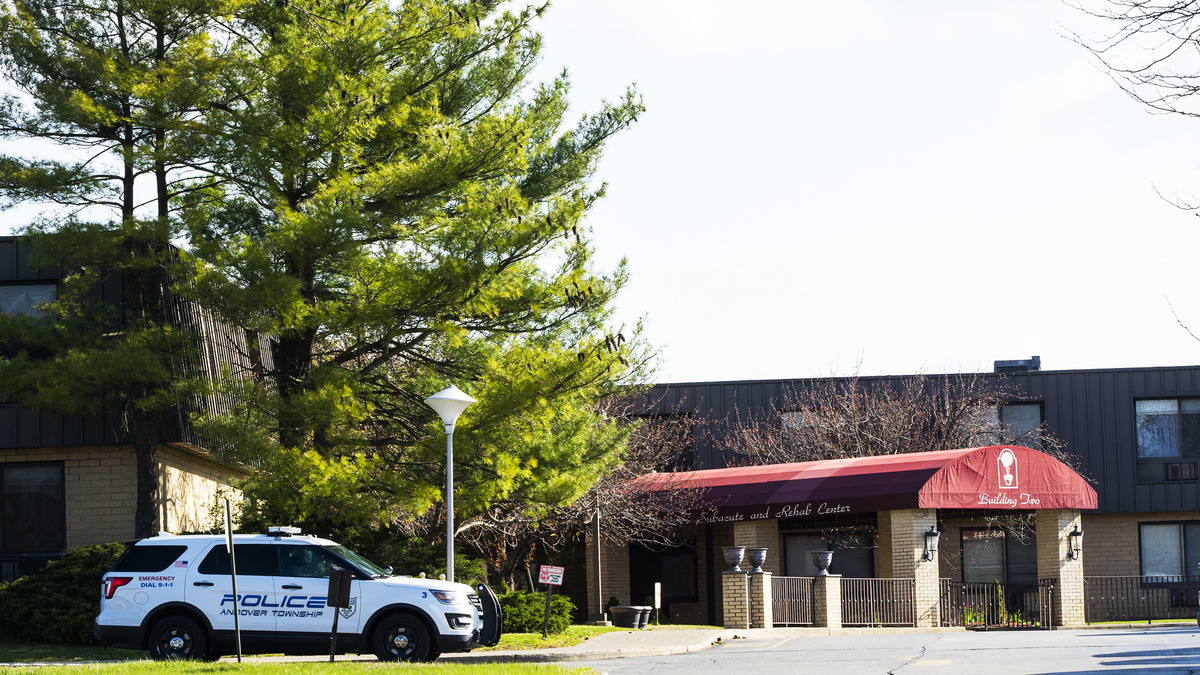 After an anonymous tip to police, 17 people were found dead at the Andover Subacute and Rehabilitation Center. Here, a New Jersey Police vehicle parks at the facility's entrance on Thursday.

A large nursing facility in New Jersey is emerging as a symbol of how nursing homes are being overwhelmed by COVID-19, after an anonymous tip led to the discovery of 17 dead people at the Andover Subacute and Rehabilitation Center I and II long-term care facility.

Families who lost loved ones say they received form letters telling them their loved ones were sick – and in at least one case, the letter arrived after the patient died.

More than 100 residents of the Andover facility's two buildings are now confirmed to have COVID-19; more than 180 other residents and staff are showing respiratory or flu-like symptoms. The outbreak, and problems with how bodies are handled, prompted the governor to order an investigation Thursday.

'We're not pleased with what is going on at the Andover facility," said New Jersey Health Commissioner Judith Persichilli, the first registered nurse ever to lead the state agency.

The situation at the nursing home deteriorated despite early word of a potential coronavirus cluster. County health officials first alerted the state health agency to an outbreak at Subacute II on March 29, according to Sussex County Administrator Greg Poff.

"The total number of deaths as of April 15 at this facility was 57 total deaths, of which 26 were COVID-19 related," Poff said in an email to NPR.

The first official word of a large death toll at the Subacute facility came on Saturday, when "we were notified that the facility was in need of body bags," Persichilli said. She added, "It was also reported that there were 28 bodies being stored in that facility."

After receiving that report, Persichilli says, notifications rippled through state and local agencies. And at 2 a.m. on Sunday, she said, the local health officer visited the facility. They reported finding adequate staffing — but five bodies. The officer also said three bodies had been released earlier on Saturday.

The scope of the tragic situation was only fully revealed after the Andover Township Police Department received an anonymous tip early this week, reporting that a body had been stored in a shed.

"When the police arrived, the corpse had been removed from the shed, but they discovered 17 bodies piled inside the nursing home in a small morgue intended to hold no more than four people," The New York Times reports.

"I am heartbroken by the tragic news that several individuals have lost their lives" in the outbreak at the nursing home, New Jersey Gov. Phil Murphy said at a news conference alongside Persichilli Thursday, adding that he is praying for employees and patients who are affected.

"I am also outraged that bodies of the dead were allowed to pile up in a makeshift morgue at the facility," Murphy added.

Staff, family are seeking answers as to questions they have from the administration and owners of the Andover Subacute facilities' COVID-19 cases: https://t.co/b0NaIiO8ft

Patients in New Jersey's long-term care facilities "deserve to be cared for with respect, compassion and dignity," the governor said.

"We can and must do better," Murphy said, adding that he has asked Attorney General Gurbir S. Grewal both to look into the case, and to review recent records from any other nursing facilities that have seen a spike in deaths during the COVID-19 pandemic.

After an initial visit to Andover Subacute, the state health department ordered the nursing home to report daily to local officials, Persichilli said.

She added, "The facility was required to institute their backup plan for storage of deceased at the local hospital."

But on April 14, she added, "We received another complaint, that more bodies were being stored."

That same day, she said, an inspection showed a staffing shortage. And the facility's ownership – it is controlled by Chaim Scheinbaum and Louis Scwartz, of Alliance Healthcare, according to official records — was contacted.

Health agencies are now sending staff out to monitor the care center "on a regular basis," Persichilli said.

Police say the Andover staff were struggling to cope with the rapid rate of deaths in the home. More than a dozen bodies were immediately removed from the care facility on Monday, and officials arranged for a refrigerated truck to be brought to the nursing facility to be used as an overflow morgue.

The two Subacute buildings sit across the street from each other in Andover, about 55 miles northwest of New York City.

At Subacute II – the larger of the two buildings, currently with 419 residents – 84 patients have COVID-19, Persichilli said. An additional 99 residents have respiratory symptoms, along with 48 staff members.

At Subacute I, 19 residents have tested positive for COVID-19, she said, including two who are hospitalized. Some 34 residents and four staff members have flu-like symptoms.

New Jersey now has more than 75,000 coronavirus cases, Persichilli and Murphy announced. They also reported 362 new deaths; of that number, 54 people had been living in long-term care facilities.

The flood of COVID-19 cases drove the Andover facility to send out form letters to residents' families last week, informing them that their loved one had tested positive for the coronavirus – and warning them that due to the enormous number of cases in northern New Jersey, there was little chance of getting specialized care in any local hospitals.

"Due to the limitations of the healthcare system in place and considering that community-based hospitals in North Jersey hospitals are overwhelmed, there is very minimal chance of getting any more care in the hospital. Therefore, we are treating our residents in a contained unit in our facility and keeping them in a home setting."

Cynthia Gunderman tells the Herald that her family received their letter, which was dated April 6, on April 10; the next day, her father-in-law died of COVID-19.

In another case, Beth Gangi tells the newspaper that earlier this month, her family was told her uncle was being moved to a hospital due to a fever. He was then moved back to Subacute – but the facility called on April 6 to say he had died. Gangi says the family got the letter about his COVID-19 status four days later.

Together, the two nursing home buildings – Subacute I and Subacute II — have 702 beds, according to their Medicare profile pages, with Subacute II being the larger of the two with 543 beds. The building also has only a one-star rating on Medicare.gov – or "much below average" – with deficiencies found in health inspections and staff assessments.