Accessibility links
China's Economy Retreats, With Pandemic Causing Biggest GDP Drop In Decades : Coronavirus Updates China's economy contracted by 6.8% in the first three months of 2020 from the same period a year ago — its biggest drop since 1992. 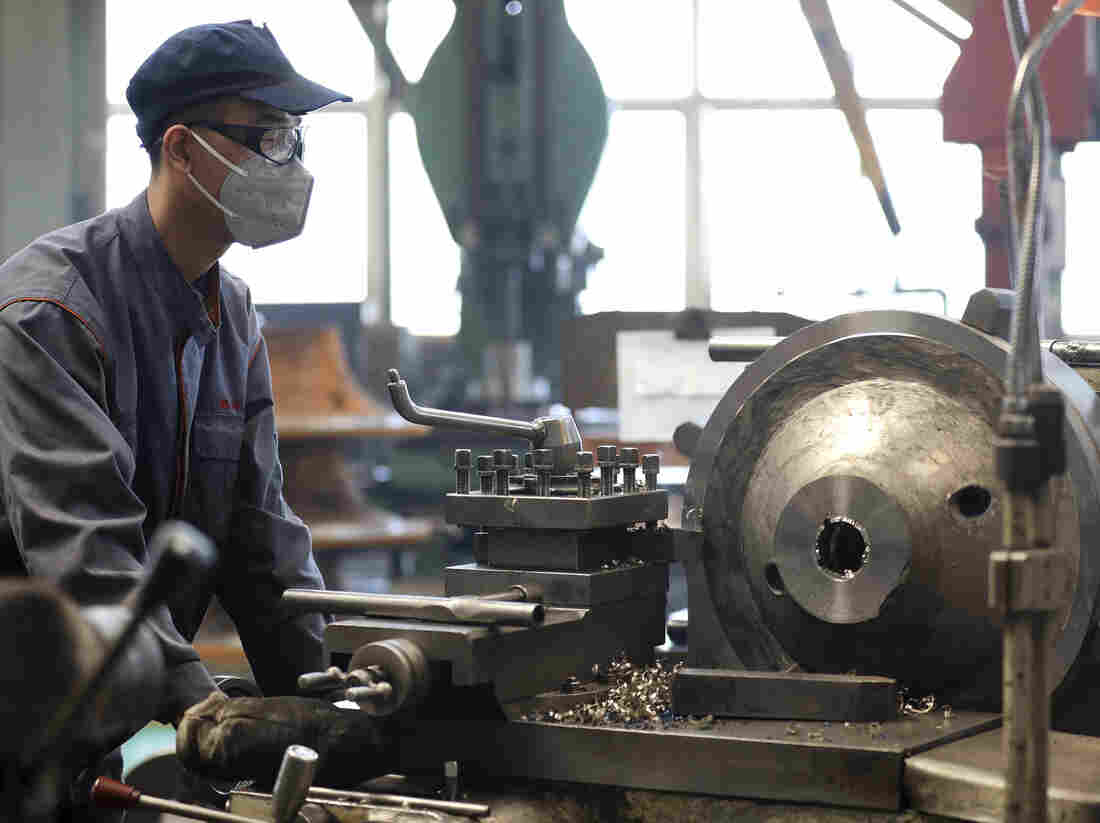 An employee wears a face mask as he works at a blower and fan manufacturing plant in northeastern China's Liaoning province. The economy contracted by 6.8% in the first three months of 2020 from the same period a year ago. Yao Jianfeng/Xinhua via AP hide caption 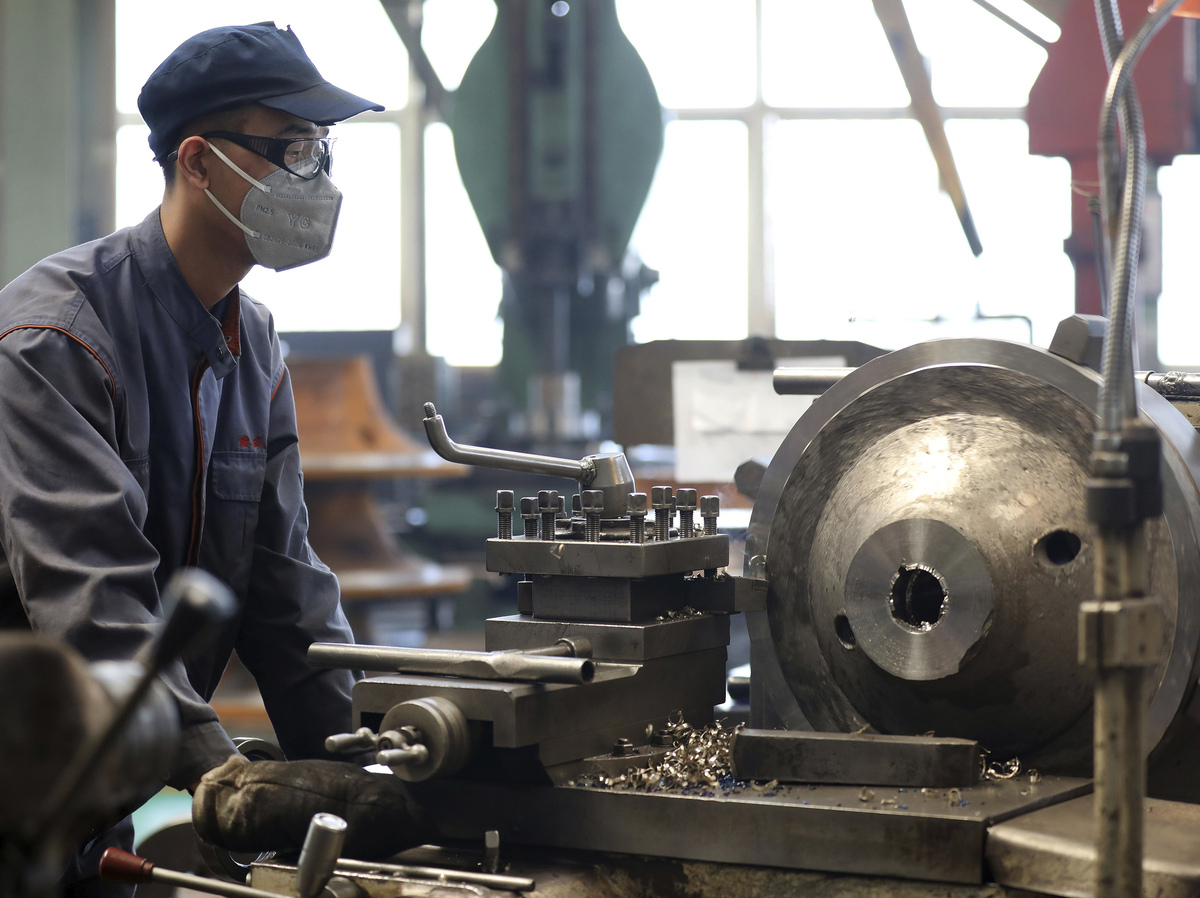 An employee wears a face mask as he works at a blower and fan manufacturing plant in northeastern China's Liaoning province. The economy contracted by 6.8% in the first three months of 2020 from the same period a year ago.

China's economy contracted by 6.8% in the first three months of 2020 from the same period a year ago — its biggest drop in nearly three decades, as the country's factory output and domestic spending ground to a halt amid the unprecedented shock of the coronavirus pandemic.

Data from the National Bureau of Statistics of China on Friday showed that industrial output was down 8.4% from the year before and retail sales fell by a whopping 19% as the country has been on lockdown for weeks in an effort to contain the spread of the virus.

The sharp drop-off in first-quarter gross domestic product, the biggest since China began sharing quarterly economic data in 1992, represents a 9.8% contraction over the final three months of 2019. The country hasn't recorded an economic contraction in any of its official statistics since 1976, the year it exited the Cultural Revolution, a bloody decade of political turmoil.

In the more than four decades since, China blazed a path of explosive — some would say reckless — economic growth, transforming itself from a largely rural, agrarian country into an urban manufacturing power that has risen to become the world's second-largest economy.

The potentially deadly coronavirus was first discovered in the central Chinese city of Wuhan in December and quickly spread to the rest of the country before spilling over its borders and, in a matter of weeks, making its way across the globe. While China was the early epicenter of the disease, aggressive action to isolate its population, first in Wuhan and then across the country, helped tamp down the disease, even as Beijing was accused of covering up the extent of its outbreak.

For nearly two months, China imposed severe lockdown measures on more than 700 million of its residents in a desperate bid to slow down the spread of the new virus. Although it has slowly begun to crank up its economy as quarantines are lifted and infections appear to be tailing off, the rest of the world is still battling COVID-19, devastating global trade and causing consumption of products made in China to plummet.

China's contraction is likely a harbinger of the painful economic reopening that other countries must face, such as the United States, which are grappling with surging unemployment after shutting down their economies in a bid to stem the spread of the virus.

The steep decline in growth will also almost certainly force China's ruling Communist Party to abandon an important political milestone: the doubling of annual GDP from 2010 to the end of 2020.

"They could [reach this target], but they would have to unleash so much useless spending and such a big surge in debt, that I think even [China's leaders] agree it makes no sense," said Michael Pettis, a finance professor at Beijing's Peking University.

A tough road to recovery

The lockdowns disproportionately affected China's itinerant migrant workers, who power the country's service and manufacturing sectors. Millions found themselves unable to return to their places of employment because the government measures went in place around the time of Chinese New Year, when many people return to their hometowns and villages for family gatherings.

Local governments lifted many of those restrictions as new case counts decelerated, with many reopening shuttered factories in stages by mid-February. Hubei province, the epicenter of the outbreak in China, began its economic restart a month later.

Municipal governments chartered buses and trains to ferry workers trapped by local quarantine measures back to their places of work, and entire hotels were set aside to house workers for 14 days before they returned to the production line. And they worked with factory managers to put in place health protocols, such as twice-daily temperature checks and the purchasing of large caches of face masks and disinfectant equipment.

"From the factory down to each department down to each individual person, we have made sure there are no blind spots whatsoever," said Li Shijian, a manager at the Honda Dongfeng joint venture automotive plant in the Chinese city of Wuhan, where more than 50,000 people ultimately were sickened. The company says it has managed to reach 98% of its pre-coronavirus output of Honda Civics.

But China's mom-and-pop businesses and even many large private firms have not been able to marshal the same kind of financial and political capital to secure the needed permits and state support to reopen.

On Friday, China's cabinet-level State Council said 99% of manufacturing firms had begun working again, while 84% of small and medium businesses had reopened.

Yet the numbers do not mean economic activity has resumed in full. Many white-collar businesses say they can have no more than half of their workers in the office at any given time. In Hubei province and areas with a more recent history of infections, restaurants and other services remain take-out only. More than 240,000 small businesses have gone bankrupt during the outbreak.

"Many of our workers are just getting back [to Hubei]," said Angela Su, a sales manager, by phone. "I expect that it will be an even longer time before we can begin working on-site again."

The lucky few who have opened their doors again face another problem: shoppers aren't coming.

"The impact on consumption is double: on the one hand because so many people don't have jobs, household income is lower. On the other hand, because people were so shocked by the coronavirus, they probably all will decide to increase their savings even if their income is unaffected," Pettis said.

"Lingering fear of the virus and uncertainty over income and job losses will weigh on consumption in the coming months," wrote Tommy Wu, an economist with consultancy Oxford Economics, in a research note Friday.