Accessibility links
Orthodox Christians Observe Easter Amid Crackdown On Rogue Priests And Congregants : Coronavirus Updates It's a time when churches are full, blood-red eggs are cracked to symbolize Christ's resurrection and lambs are roasted as part of family feasts. But the coronavirus has shut down those celebrations. 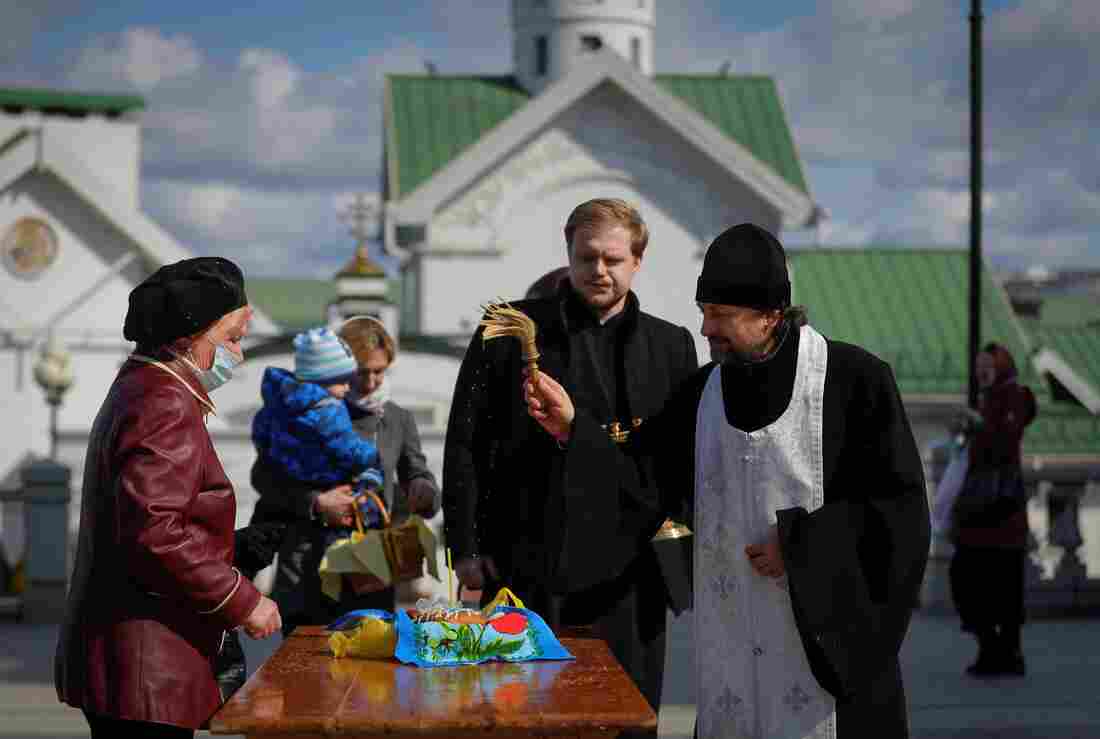 An Orthodox priest blesses traditional Easter cakes and painted eggs in preparation for Easter, outside a church in Minsk, Belarus on Saturday. Sergei Grits/AP hide caption 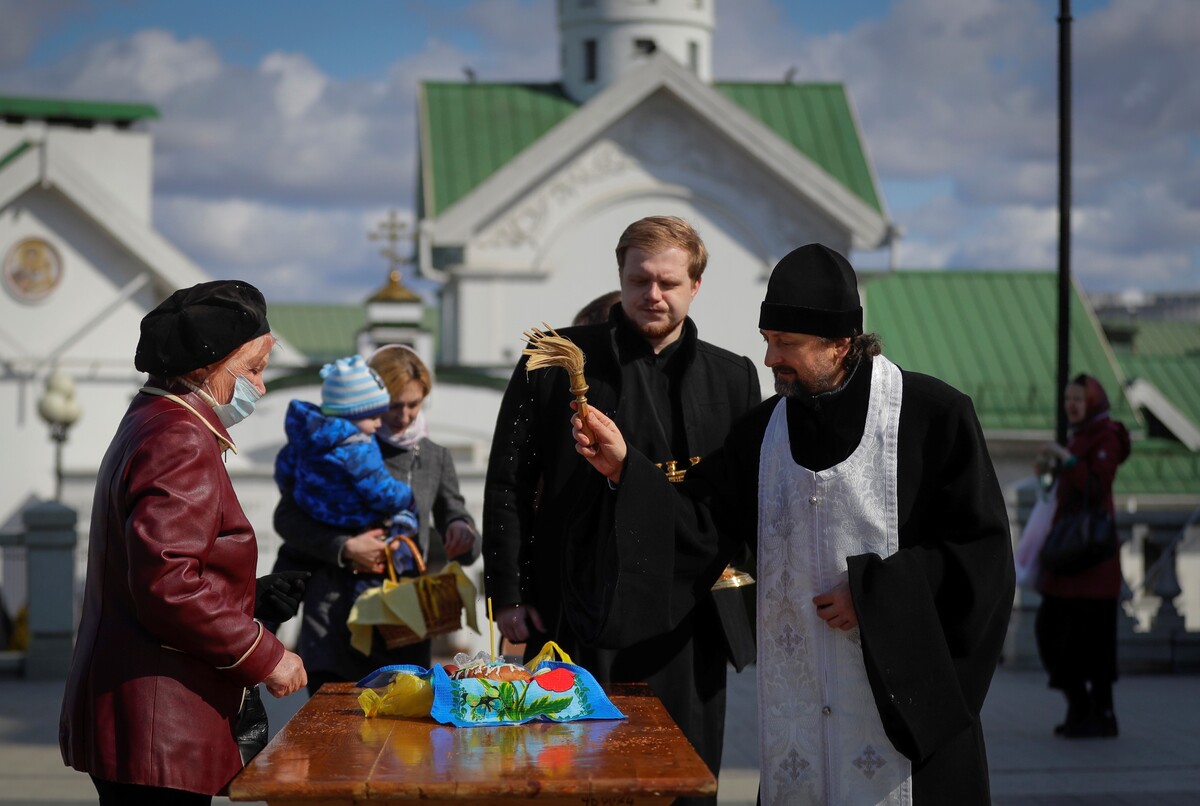 An Orthodox priest blesses traditional Easter cakes and painted eggs in preparation for Easter, outside a church in Minsk, Belarus on Saturday.

It's a time when churches are full, their bells ringing as parishioners embrace and kiss after singing Christ Is Risen at the stroke of midnight on Holy Saturday. Blood-red eggs are cracked, and lambs are roasted as part of a giant family feast. There's even dancing.

But the coronavirus pandemic has shut down those celebrations in many Orthodox Christian countries, including Greece, Romania and Serbia. This year, worshippers may not even light candles from the "Holy Fire," the flame from the Church of the Holy Sepulcher in Jerusalem that's flown in from Israel.

Greece is on total lockdown this weekend. Greeks watched a livestream of Good Friday prayers from self-quarantine at home, skipping the Epitaphios procession, when an icon of the dead Christ in a flower-filled funeral bier is carried around the neighborhood. They also scrapped annual plans to drive out to ancestral villages and roast lamb with grandparents. (One man parodied what Easter lamb-roasting would look like this year.)

Police are monitoring streets by drone and patrolling outside churches to make sure priests holding closed-door services do not let in parishioners.

Prime Minister Kyriakos Mitsotakis banned church services last month, after weeks of pushback from the Greek Orthodox Church. Mitsotakis' tough social distancing policies have been credited with Greece's success at fighting the spread of COVID19. (Greece has reported at least 2,235 confirmed cases of the coronavirus and 110 deaths).

Ecumenical Patriarch Bartholomew I of Constantinople, the spiritual leader of Orthodox Christians, has implored the faithful to follow government orders for their own health. But some Greek Orthodox priests have balked.

On the Aegean island of Chios, Father Christophoros Gourlis was arrested on Saturday and fined more than $5,000 after opening his doors to parishioners on Good Friday. As police dragged away one woman trying to enter the church, the priest was heard yelling: "This is an outrage! I came to bless you and instead you're manhandling a woman!"

Earlier this month, on another Ionian Sea island, Corfu, Bishop Nektarios was detained after allowing parishioners into his church service. He also gave worshippers communion using a shared spoon dipped into a chalice of wine, which increases the risk of coronavirus transmission. He's set to face trial on May 25, along with Corfu's mayor and a top city councillor, who attended the banned service.

Last month, police on the Ionian island of Kythira detained Metropolitan Seraphim after he held mass in contravention of the ban.

These rogue Greek clerics aren't alone. In Georgia, which declared a state of emergency on March 21, churches are ignoring restrictions and holding crowded services. In Ukraine and Bulgaria, churches remain open even as the government has urged the faithful to stay home.