'We'll Get Through This,' Pence Tells Air Force Academy Graduates

'We'll Get Through This,' Pence Tells Air Force Academy Graduates 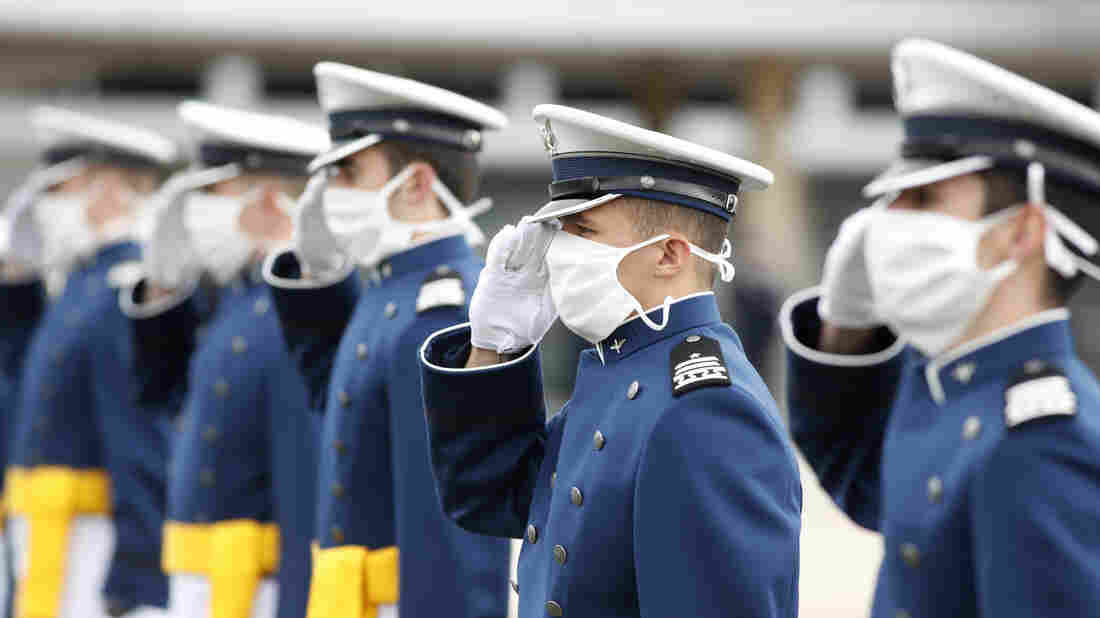 Cadets wear face masks during the graduation ceremony for the class of 2020 at the U.S. Air Force Academy on Saturday. David Zalubowski/AP hide caption 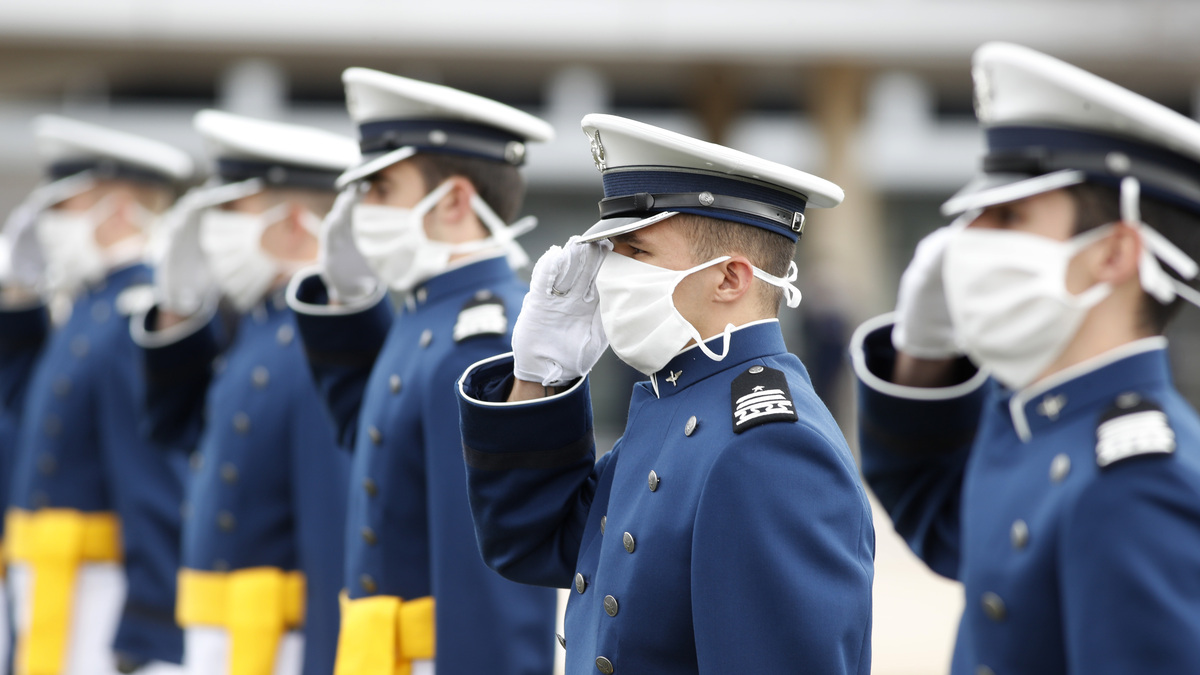 Cadets wear face masks during the graduation ceremony for the class of 2020 at the U.S. Air Force Academy on Saturday.

They still threw their caps into the air as F-16s flew overhead.

They still responded with a resounding "hua!" whenever anyone mentioned the class of 2020.

But this year's graduation of the U.S. Air Force Academy near Colorado Springs was different from any other in the institution's history. Instead of assembling in Falcon Stadium, the nearly 1,000 cadets assembled in an outdoor field on campus. They kept eight feet between them as they marched to their socially distant seats. And instead of shouting encouragement from the stands, friends and family could only sound off in the YouTube comments section.

"Congratulations Geraud," wrote Anthony and Dina Blackmon, among the more than 30,000 people watching the livestream. "The Blackmons are watching! Great job!" 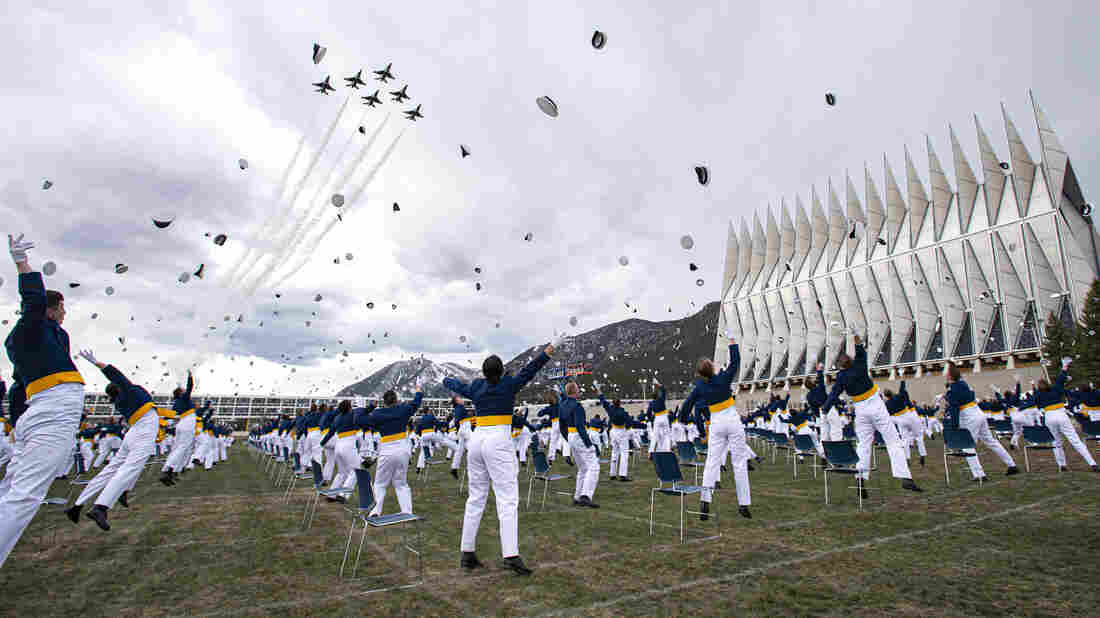 The class of 2020 toss their hats into the air as Thunderbirds fly over. Christian Murdock/Colorado Springs Gazette/Tribune News Service via Getty Images hide caption 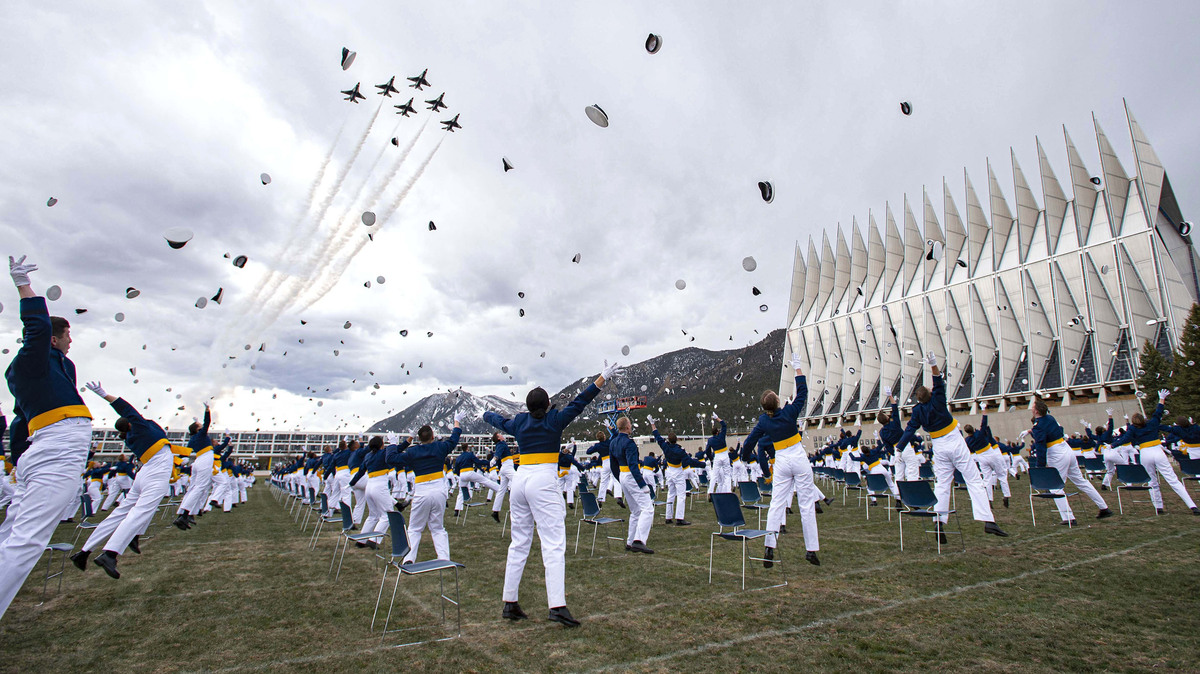 The class of 2020 toss their hats into the air as Thunderbirds fly over.

In his commencement address, Vice President Pence acknowledged the adversity facing the nation.

"We gather at a time of national crisis as the coronavirus epidemic impacts our nation and the wider world," Pence said. "For the first time in our history every state and territory in our land are under disaster declarations.

"America is being tested," Pence said later in his address. "And while there are signs that we are making progress in slowing the spread, as we stand here today more than 700,000 Americans have contracted the coronavirus, and, tragically, more than 37,000 of our countrymen have lost their lives.

"But as each of you has shown in your time here, and as the American people always show in challenging times, when hardship comes, Americans come together," Pence continued.

He cited medical workers on the front lines, farmers and grocers keeping America fed, and autoworkers who are making medical equipment to save lives.

"With the courage, strength and compassion of the American people, we'll get through this," Pence said. "We'll protect the most vulnerable and we will heal our land."

The 62nd graduating class was unusual for another reason: It's the first that will send cadets into the newly created Space Force, the sixth branch of the U.S. armed forces.

Eighty-six cadets will join the Space Force. "You are our future and I need you to be bold," Gen. John Raymond, chief of space operations, told the class. "You will build this service from the ground up."

Unlike in years past, cadets didn't march to accept their diplomas. And when the class of 2020 was dismissed, the newly commissioned officers didn't embrace their fellow classmates. They quietly put their face masks on before walking off the field.