Accessibility links
Brazil's Bolsonaro Joins Supporters In Protest Against Coronavirus Measures : Coronavirus Live Updates Brazilian President Jair Bolsonaro has been widely accused of endangering the public by greatly underestimating the threat posed by the coronavirus, which has claimed more than 2,500 Brazilian lives. 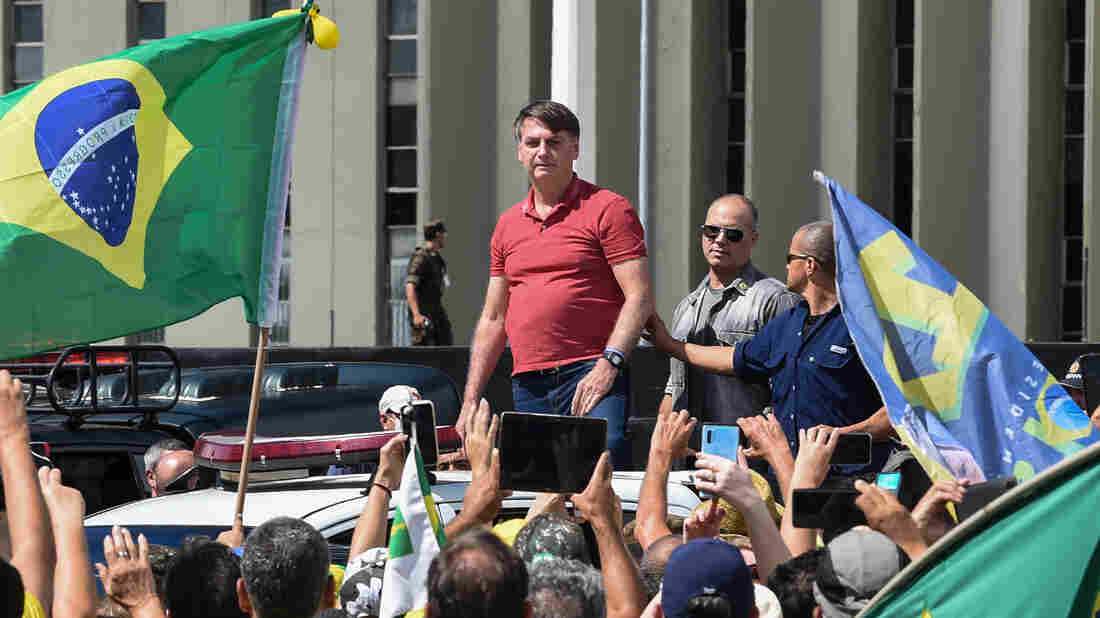 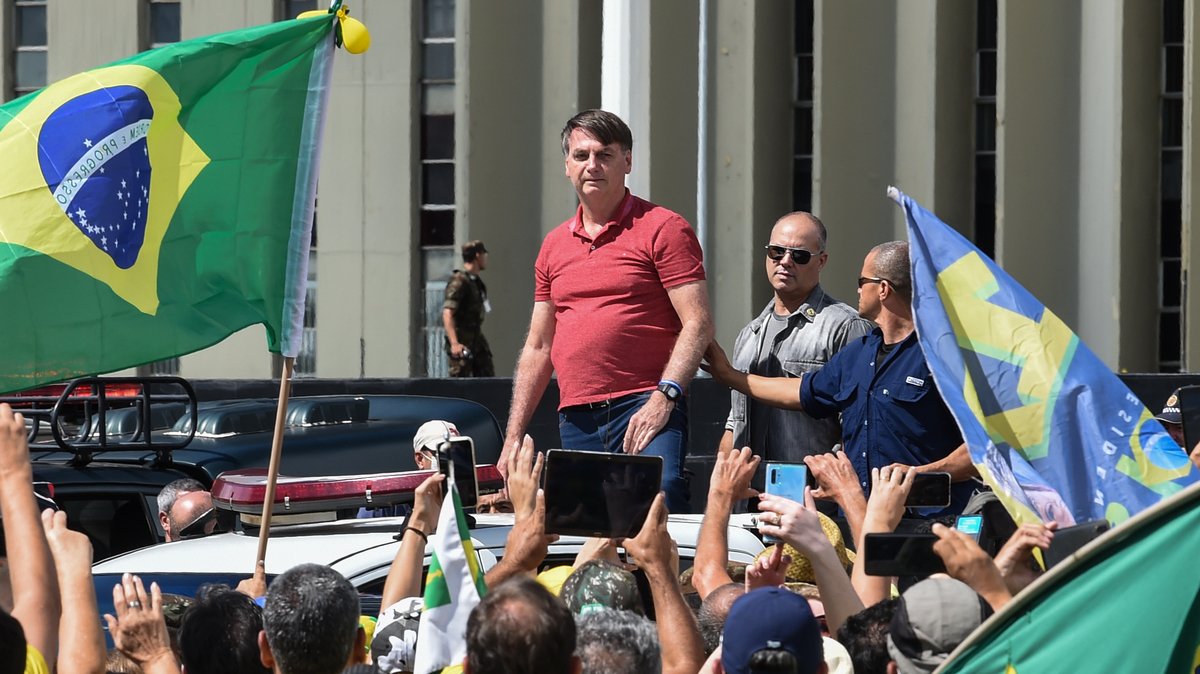 Brazilian President Jair Bolsonaro prepares to speak to supporters protesting against quarantine and social distancing measures to combat the new coronavirus outbreak in Brasilia on Sunday.

Brazil's far-right President Jair Bolsonaro is the focus of a fresh outcry after taking part in a public protest against democratic institutions that included calls for a military takeover.

The president's participation in the event has caused outrage among judges, human rights groups, lawyers and others, and comes amid growing controversy over his response to the coronavirus crisis.

Brandishing placards and flags, hundreds of people drove by motorcade to Sunday's rally, which was held outside army headquarters in the capital Brasilia.

"I am here because I believe in you. You have an obligation to struggle for the country!" the 65-year-old president told the assembled crowd in a speech transmitted live on his social media platforms.

The protest was particularly aimed at Brazil's Supreme Court and Congress — institutions regarded with deep hostility by Bolsonaro supporters, who consider them as obstacles to enacting the president's agenda.

Some of the crowd called for the reintroduction of a notorious 1968 law that enabled Brazil's dictatorship to dissolve Congress and introduce other highly repressive measures. However Bolsonaro, a retired army captain and outspoken admirer of Brazil's 1964-1985 military regime, stopped short of endorsing those, and promised to defend democracy.

The protest also called for an end to social isolation measures introduced by governors and mayors in many cities to stop the spread of COVID-19, which has so far claimed more than 2,500 Brazilian lives.

Bolsonaro has been widely accused of endangering the public by greatly underestimating the threat posed by the coronavirus. He has called it "a little flu" and is campaigning to end shutdowns. He wants isolation to be restricted to people over age 60 and other medically vulnerable groups in order to avoid further massive losses of jobs and businesses.

Last week, he fired his health minister, Luiz Henrique Mandetta, who supported the broad isolation measures recommended by the World Health Organization and other international medical and scientific experts.

According to a recent poll of Brazilians by Datafolha, 68% also approve of broad social isolation. Yet cellphone monitoring data shows the number of Brazilians ignoring official pleas to stay at home has grown significantly in recent days, a trend that Bolsonaro's critics blame on him.

Political analysts believe the increasingly unpopular Bolsonaro is engaged in a struggle to survive politically, and is positioning himself to divert blame for the vast virus-related damage toward his foes — notably governors, Congress, the judiciary and the media.

Gustavo Ribeiro, a political analyst and editor of The Brazilian Report, an English-language news site, says Bolsonaro's behavior is typical of his tactics since taking office last year: "When he doesn't have a scapegoat," Ribeiro says, "he always creates one in order to put the blame of his shortcomings on someone else."

Although Bolsonaro has extremely close military ties, his appearance at Sunday's protest appears to have gone down badly with the army's high command. They reportedly fear it undermines their efforts to convince the public that the military is an apolitical institution serving all governments.

Brazil's Estadão newspaper reported Monday that Bolsonaro's participation in the rally caused "enormous discomfort" among the top brass, not least because the protest took place in front of a military base.