Accessibility links
S.C. Beaches Reopen — Or Not — Reflecting A Divide Over Coronavirus Shutdown : Coronavirus Updates Some of the state's most popular beaches opted to stay closed and others reopened, creating a hopscotch pattern of differing polices.

S.C. Beaches Reopen — Or Not — Reflecting A Divide Over Coronavirus Shutdown

S.C. Beaches Reopen — Or Not — Reflecting A Divide Over Coronavirus Shutdown People descended upon Garden City's beach in South Carolina Tuesday, within minutes of an executive order taking effect that allows beaches to reopen if local leaders allow it. Other nearby beaches remain closed.

South Carolina's beaches now have Gov. Henry McMaster's approval to reopen, after closing due to the COVID-19 pandemic. But as the governor's executive order took effect Tuesday, some of the state's most popular beaches opted to stay closed and others reopened, creating a hopscotch pattern of differing polices.

"I've restored public beach access, allowing locals to use their discretion," McMaster announced on Monday, saying his decision was informed by the latest projections that showed the disease's worst effects might have already peaked in his state.

McMaster had ordered all the state's beaches closed through an executive order on March 30, after throngs of people continued to congregate despite public health warnings about the potential to spread the coronavirus.

Minutes after the governor's new order took effect Tuesday, crowds of people descended on the beach to enjoy a sunny, 75-degree day, as Gavin Jackson of public broadcaster SCETV showed via Twitter.

A bit further down Surfside Beach around 12:30 p.m. on Tuesday. pic.twitter.com/C7jBsNAMXT

Surfside Beach, just south of Myrtle Beach, opted to reopen only to joggers, pedestrians and cyclists. But on the adjacent beach in Garden City, many of those who arrived came equipped with beach chairs and blankets, to relax on the sand. Garden City is an unincorporated part of Horry County, which reopened all such beaches today.

It was one of many disparate scenes that played out up and down the state, as local officials came to their own conclusions about preserving public safety while also allowing the resumption of activities such as strolling along the surf. 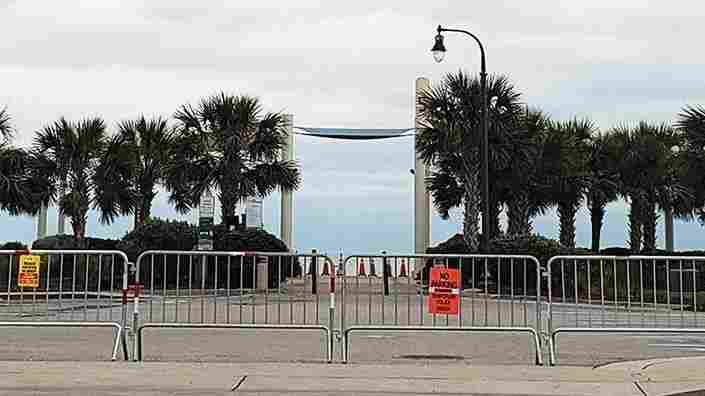 Several large beaches in South Carolina remain closed and others are reopening Tuesday, after receiving blanket approval from the governor. City of Myrtle Beach hide caption 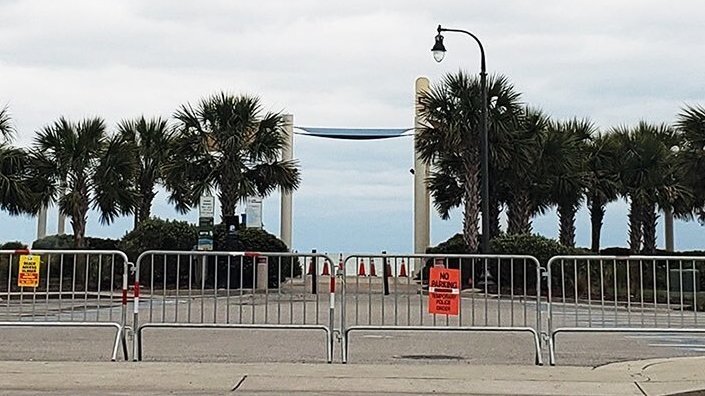 Several large beaches in South Carolina remain closed and others are reopening Tuesday, after receiving blanket approval from the governor.

The move was needed, Pedersen said, "to maintain the health, safety, and welfare" of city residents.

But in the neighboring city of North Myrtle Beach, officials reopened beach access Tuesday, along with oceanside amenities such as showers and bathrooms. The city says beachgoers must still practice social distancing, and people are barred from gathering in groups of three or more, except for families. The city also says it "prohibits partying and team games (volleyball, etc.)."

Farther south, large beaches in the Charleston area such as Folly Beach have opted to stay closed to visitors. Folly Beach says it's currently operating a checkpoint, to admit only residents or authorized visitors such as construction workers and delivery drivers.

Hilton Head Island says its public beaches remain closed. But a handful of beaches have remained open throughout the emergency, including private beaches both there and on Kiawah Island. Like many other resort areas, Kiawah has prohibited any new check-ins or reservations at short-term rental properties through at least the middle of May.

South Carolina has been under a state of emergency since March 13, when both President Trump and Gov. McMaster declared emergencies due to COVID-19. The president declared a disaster in the state on March 27, after a request from the governor.

The state currently has 4,608 confirmed coronavirus cases, including 135 deaths.

Citing information from the University of Washington's Institute for Health Metrics and Evaluation, Bell said the new modeling South Carolina "indicates an earlier estimated peak for bed utilization, which is now around April the 15th."

According to that model, the state hit its peak in deaths around April 9, Bell said.

"Together, these two projections indicate that the curve may have begun to level for us here in South Carolina," she added.

Bell added that modeling trends can change, and she urged officials to be very cautious as they relax restrictions.