Accessibility links
Georgia Gov. Disregards Trump Criticism, Moves Ahead With Plans To Reopen Businesses : Coronavirus Live Updates "I am confident that business owners who decide to reopen will adhere to Minimum Basic Operations, which prioritize the health and well-being of employees and customers," Gov. Brian Kemp said. 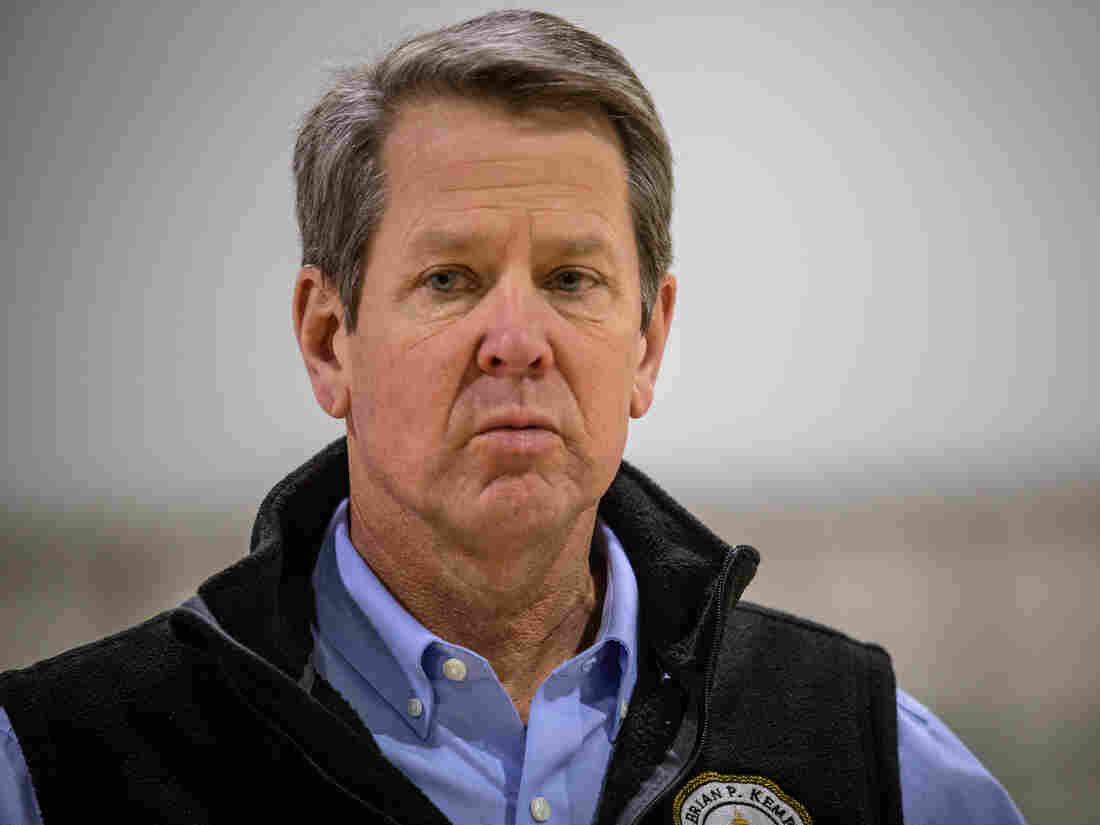 Georgia Gov. Brian Kemp, pictured on April 16, insists he is moving forward with plans to allow some nonessential businesses to open their doors to the public. The plan has come under intense criticism. Ron Harris/AP hide caption 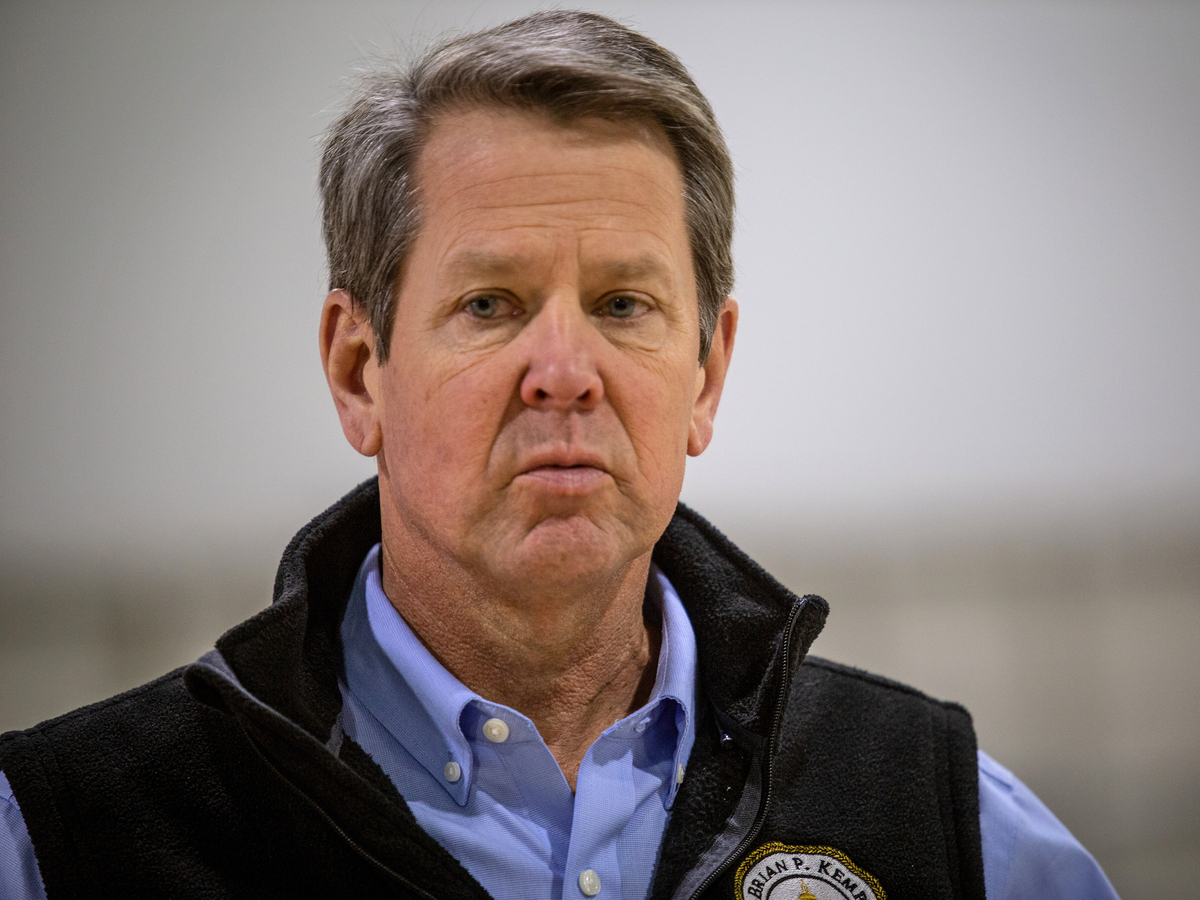 Georgia Gov. Brian Kemp, pictured on April 16, insists he is moving forward with plans to allow some nonessential businesses to open their doors to the public. The plan has come under intense criticism.

Georgia Gov. Brian Kemp is undeterred by President Trump's criticism of his move to reopen some nonessential businesses. He insists he will forge ahead with plans to jump-start the economy as early as Friday.

The governor said on Wednesday night that he plans to restart "shuttered businesses for limited operations" ahead of the state's shelter-in-place order being lifted on April 30.

Kemp is set to allow a range of businesses to open Friday on a "limited basis," such as gyms, tattoo shops, and hair salons. Theaters are allowed open Monday, subject to some restrictions, and restaurants will be allowed to open to dine-in customers that same day. Religious institutions can hold services "in accordance with strict social distancing protocols," according to the governor's office.

"Our next measured step is driven by data and guided by state public health officials," Kemp wrote in a tweet. "We will continue with this approach to protect the lives — and livelihoods — of all Georgians."

Earlier today, I discussed Georgia's plan to reopen shuttered businesses for limited operations with @POTUS. I appreciate his bold leadership and insight during these difficult times and the framework provided by the White House to safely move states forward. (1/3) #gapol

He added: "Just like the thousands of businesses currently operating throughout Georgia, I am confident that business owners who decide to reopen will adhere to Minimum Basic Operations, which prioritize the health and well-being of employees and customers."

President Donald Trump on Wednesday said he "strongly disagrees" with Kemp's decision to reopen some nonessential businesses on Friday, but added that it's up to states to determine.

These statements marked a reversal from Trump's position a day earlier, in which he praised Kemp during the White House Coronavirus Task Force briefing for forging ahead despite advice to the contrary from the nation's leading health experts.

A White House official tells NPR's Tamara Keith that Trump first spoke to Kemp Tuesday night, but that he grew more concerned and spoke to governor again on Wednesday.

By then, Trump had grown uneasy about Kemp's plans, and made a second call, the White House official said. Trump also called other Georgia politicians about the issue, the official added.

White House spokesperson Judd Deere later clarified the president "disagrees with the Georgia Governor's decision to open certain facilities which are in violation of the phase one guidelines. The President cares deeply for the health and safety of the people of Georgia as he does for all Americans."

The White House has recommended that before states start to reopen, they demonstrate a downward trajectory of COVID-19 cases over 14 days. States should also have the capacity to treat all patients and test healthcare workers.

But Georgia has not yet reached either benchmark.

As NPR's Allison Aubrey reported, infectious disease experts in Georgia agree that the data show the state is moving in the right direction, but the state has not met the criteria outlined in the administration's guidance.

Experts also say there hasn't been enough testing in Georgia to show a decline in cases, which can be determined by looking at the positive rate in tests.

"The more tests that come back positive, the less likely a state is testing enough," Aubrey said.

As of Thursday, there are 21,571 reported cases of COVID-19 in Georgia and 871 people have died from the illness, according to a dashboard from Johns Hopkins University.

Kemp's move to ease restrictions is facing backlash from some state elected leaders and public health experts who say the plan is premature. However, the governor's order includes a provision that prevents city and county governments from enacting rules that are tougher or more lax than the state.

Even as some business owners gear up to reopen their doors, many are critical of the plan.

Georgia Public Broadcasting reported that Marshall Hughes, a barber shop owner in Macon, is one of them. He told the station he won't be opening up his shop any time soon.

"I'm not gonna be used as a guinea pig," Hughes said. "We already have to be hands-on with the customers. We're in close proximity with the customers cutting their hair and talking with them. It's just a setup for failure, from my point of view."