Accessibility links
'Under No Circumstance': Lysol Maker, Officials Reject Trump's Disinfectant Idea : Coronavirus Live Updates Prominent figures warned against his musing that UV light or other disinfectants — "by injection inside or almost a cleaning" — may treat the coronavirus. Trump later said he was being "sarcastic." 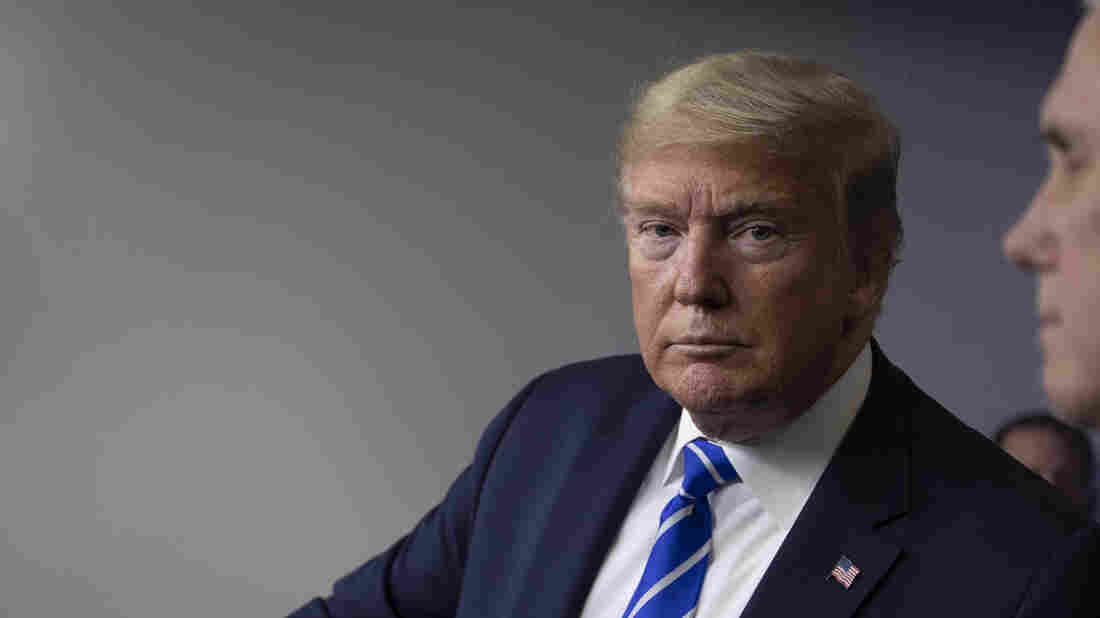 President Trump's speculations about coronavirus treatment during Thursday's briefing have been roundly rejected by doctors, epidemiologists and manufacturers alike. Trump later said he was being "sarcastic." Alex Brandon/AP hide caption 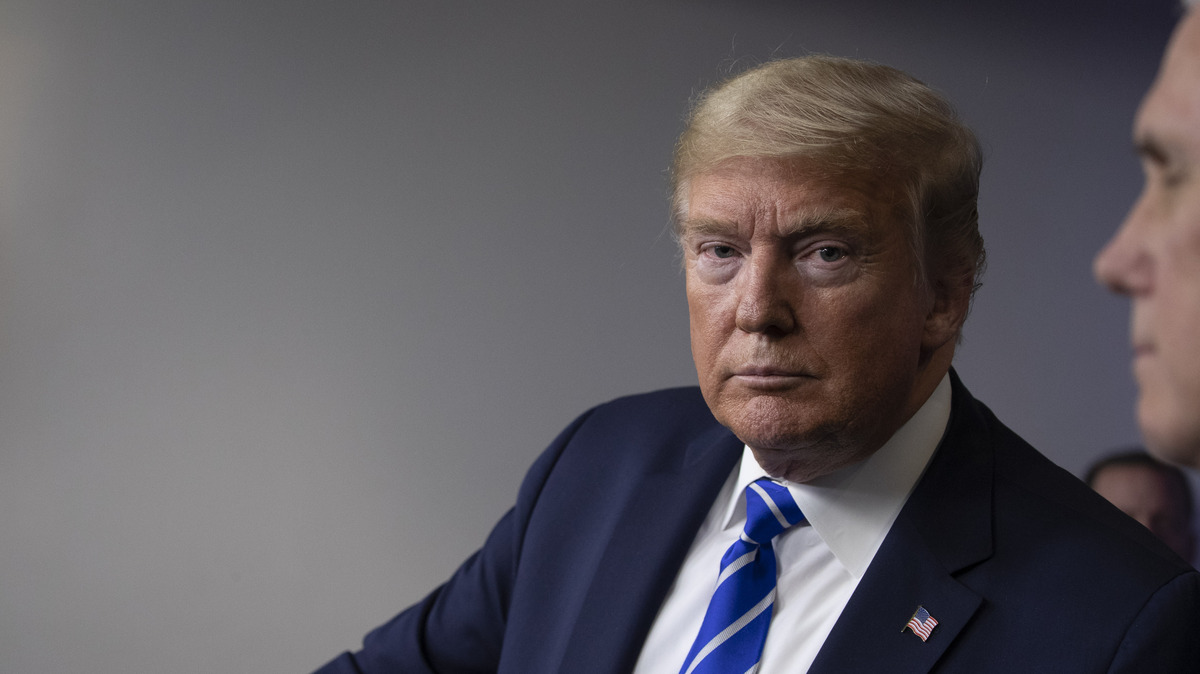 President Trump's speculations about coronavirus treatment during Thursday's briefing have been roundly rejected by doctors, epidemiologists and manufacturers alike. Trump later said he was being "sarcastic."

Please, everyone, do not try what the president just suggested at home.

That is the consensus from doctors, at least one manufacturer and even President Trump's own administration, after he speculated about possible treatments for the coronavirus during his task force briefing Thursday. After introducing research reflecting the disinfectant capabilities of ultraviolet light on surfaces, Trump mused that scientists may try to find a way to place strong disinfectants directly inside the body to treat a patient's infection.

"I see the disinfectant — where it knocks it out in a minute, one minute. And is there a way we can do something like that, by injection inside or almost a cleaning?" Trump floated, with a caveat that one would "have to use medical doctors." (You can read his full remarks here.)

When asked about the comments on Friday, Trump told reporters that he was simply asking the question "sarcastically" — "just to see what would happen."

"That was done in the form of a sarcastic question to a reporter," he explained.

Dr. Deborah Birx, response coordinator of the coronavirus task force, treated the question seriously during the briefing, however. And she was the first to answer the president when he asked if "the heat and the light" was an avenue to explore: "Not as a treatment," she said.

A wide array of medical, business and government professionals have elaborated on her straightforward response, but the basic message from all of them remains largely the same — and crystal clear: This is absolutely not something that viewers should think about trying.

Here is Dr. Birx's reaction when President Trump asks his science advisor to study using UV light on the human body and injecting disinfectant to fight the coronavirus. pic.twitter.com/MVno5X7JMA

Among the voices warning strongly against ingesting disinfectant is the Environmental Protection Agency, part of Trump's own administration. In guidance issued Thursday, the EPA outlined what constitutes safe and effective use of disinfectants to combat the spread of the virus, along with this firm reminder: "Never apply the product to yourself or others. Do not ingest disinfectant products."

Less than a week before Trump's suggestion, federal prosecutors obtained an injunction against the sale of a product marketed as a "master mineral solution" that could treat the coronavirus, according to its sellers. Last year, the Food and Drug Administration warned against the product, which was then being marketed as a treatment for other ailments, saying that "when mixed according to package directions, they become a strong chemical that is used as bleach."

"They are not meant to be swallowed by people," the FDA said last August.

After Trump made his comments, officials in Washington state made clear that their general advice has not changed. "Please don't eat Tide pods or inject yourself with any kind of disinfectant," Washington's Emergency Management Division tweeted late Thursday, adding: "Just don't make a bad situation worse."

Please don't eat tide pods or inject yourself with any kind of disinfectant.

If you do need help with #COVID19 issues, we have lots of resources at https://t.co/C4x8jjWL0x

But it has not just been authorities warning against trying out one of the theories Trump mused on. The manufacturer of Lysol and Dettol, two disinfectants that commonly use bleach for cleaning household surfaces, echoed the cautionary point.

"As a global leader in health and hygiene products, we must be clear that under no circumstance should our disinfectant products be administered into the human body (through injection, ingestion or any other route)," Reckitt Benckiser said in a statement released after the president's briefing, in response to "recent speculation and social media activity."

"As with all products," the company added, "our disinfectant and hygiene products should only be used as intended and in line with usage guidelines. Please read the label and safety information."

The World Health Organization has also warned explicitly that UV lamps are not a safe treatment to disinfect the coronavirus.

Now, it is worth noting that researchers have found that a powerful form of UV light known as UVC, as well as disinfectants such as bleach, can effectively render the virus inactive — albeit on surfaces. The trouble is, those things can have an extremely harmful effect when applied directly on, or ingested by, humans.

This is not the first time that Trump's comments about possible treatments for the coronavirus have elicited a wave of warnings from medical professionals. Last month, the president hailed a combination of chemicals known as chloroquine and azithromycin as potentially "one of the biggest game changers in the history of medicine" — but its effects remain largely unproven and, at least in one instance after Trump discussed the chemical, have proven deadly.

The National Institute of Allergy and Infectious Diseases earlier this week recommended against consuming those drugs together as a coronavirus treatment.

The FDA on Friday also cautioned against the use of the chloroquine and a related drug, hydroxychloroquine, "outside a hospital setting or a clinical trial." It says both "can cause abnormal heart rhythms such as QT interval prolongation and a dangerously rapid heart rate called ventricular tachycardia."

White House Press Secretary Kayleigh McEnany cast the controversy as a product of media bias against the president.

"President Trump has repeatedly said that Americans should consult with medical doctors regarding coronavirus treatment, a point that he emphasized again during yesterday's briefing," she said in a statement released Friday. "Leave it to the media to irresponsibly take President Trump out of context and run with negative headlines."

U.S. Surgeon General Jerome M. Adams also encouraged Americans on Friday to consult doctors before giving any medication to themselves or their loved ones.

He said: "Your safety is paramount, and doctors and nurses are have years of training to recommend what's safe and effective."