Accessibility links
GDP: Economy Shrank At 4.8% Pace In 1st Quarter. But Worst Is Yet To Come : Coronavirus Live Updates The economy contracted in the first quarter of 2020 as the coronavirus began to take its toll and spending dived. It's the first quarterly drop in six years and a likely precursor to a deep recession. 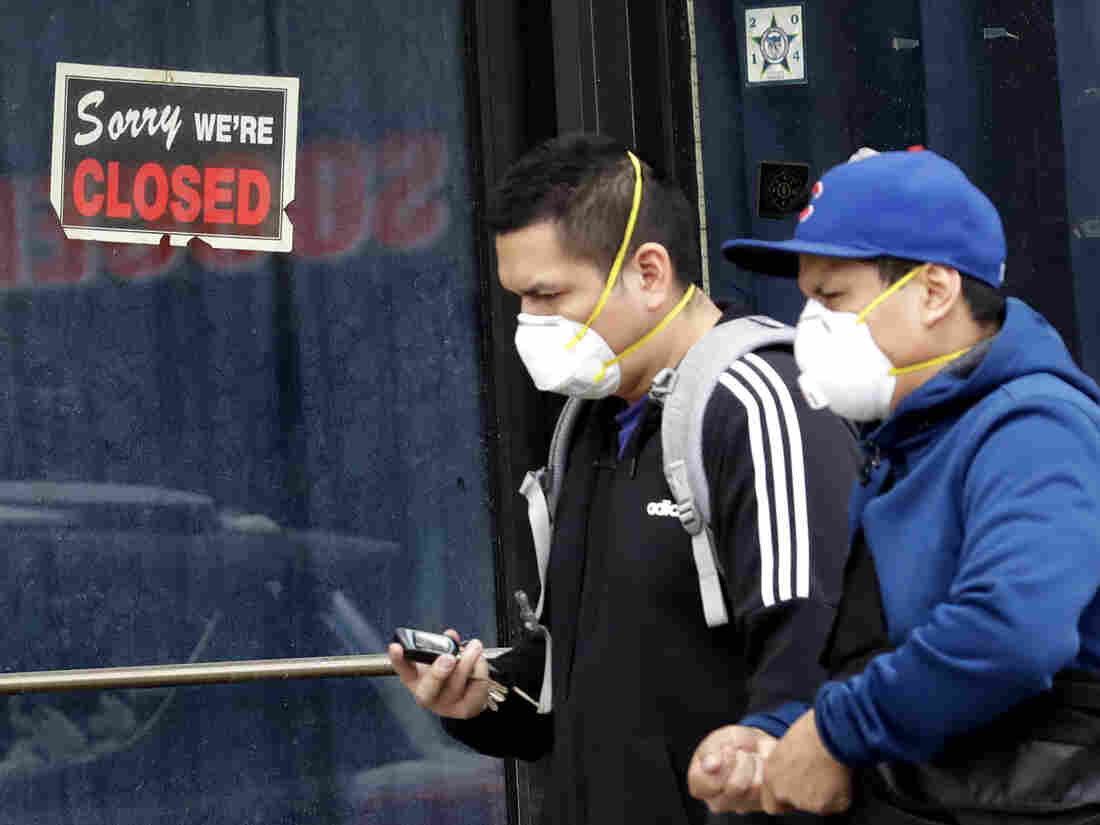 The U.S. economy shrank in the first quarter, as the coronavirus lockdown began. The April-to-June quarter is expected to be worse. Nam Y. Huh/AP hide caption 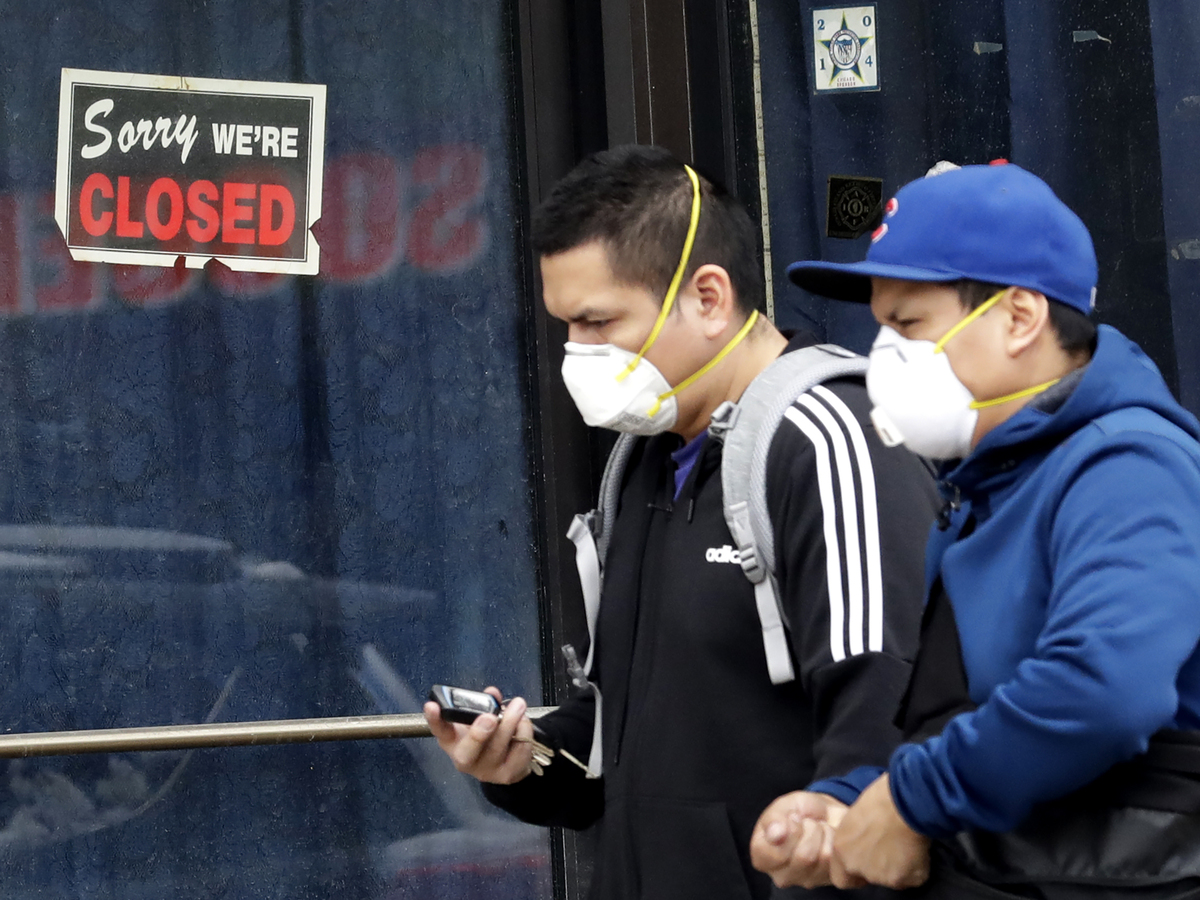 The U.S. economy shrank in the first quarter, as the coronavirus lockdown began. The April-to-June quarter is expected to be worse.

The coronavirus pandemic is likely to trigger the sharpest recession in the United States since the Great Depression. An early signal of that came Wednesday, when the Commerce Department said the economy shrank at a 4.8% annual rate in the first three months of the year — the first quarterly contraction since 2014 and the largest since the Great Recession.

For the first 2 1/2 of those months, the economy was chugging along at a steady, if not spectacular pace. But the plug was suddenly pulled in mid-March — when bars, restaurants and retail shops were abruptly closed and tens of millions of Americans were ordered to stay home in an effort to slow the spread of the deadly disease.

"The coronavirus outbreak is causing tremendous human and economic hardship across the United States and around the world," the Federal Reserve said in a statement. "The virus and the measures taken to protect public health are inducing sharp declines in economic activity and a surge in job losses."

More than 26 million people suddenly out of work have filed unemployment claims in recent weeks.

Half of all Americans say they or someone in their household has either lost hours or a job because of the coronavirus, according to a new NPR/PBS NewsHour/Marist poll.

"Prior to the coronavirus shock, the economy was doing relatively well," said Gregory Daco, chief U.S. economist for Oxford Economics. "The shock that we experienced in the second half of March actually has led to a sudden stop in spending on a lot of services and even spending on some goods."

Analysts say even though that shock affected only the last few weeks of the quarter, it was more than enough to erase the gains of the previous 2 1/2 months.

Daco said the first-quarter decline is "only the tip of the iceberg."

The bulk of the pandemic's economic impact will be felt in the current quarter — April through June. By the end of June, Daco estimates the economy will be 12% smaller than it was at the beginning of the year.

"To put that into perspective, that [drop] would be three times as large as what we experienced in the global financial crisis," Daco said. It would be comparable to what the economy experienced at the end of World War II, when factories abruptly stopped churning out tanks and warplanes but had not yet shifted to making civilian goods.

Other forecasters also expect to see a sharp reversal in economic growth.

"Whenever you have the entire country changing behavior at one time in a way that reduces spending, it's certainly enough to wipe out any of the gains that we saw earlier in the year," said Ben Herzon, an economist at IHS Markit.

He noted that since the coronavirus took hold, air travel and restaurant reservations have all but completely evaporated.

"For now, we're expecting the economy to more or less stabilize in the third quarter and then begin to recover in the fourth quarter," Herzon said. But he acknowledged there's considerable uncertainty in that outlook.

"That all depends on how quickly new infections can be driven down and how quickly consumers and businesses will feel confident enough to begin spending," he said.

Fed Chairman Jerome Powell echoed that caution, warning that consumer spending won't snap back immediately, even as parts of the economy reopen.

"It will start to pick up as people start to return to their normal patterns of spending, but the chances are it will not go right back to where we were," he said.

Powell pledged that he and his colleagues would act "forcefully, proactively and aggressively" to cushion the financial fallout.

The central bank has cut interest rates to near zero and promised to leave them there for an extended period. The Fed has also unveiled a series of emergency lending measures to keep households and businesses afloat during the pandemic.

"It is worth remembering that the measures we are taking to contain the virus represent an investment in our individual and collective health," Powell said. "As a society, we should do everything we can to provide relief for those who are suffering for the public good."