Accessibility links
Essential Workers Plan May Day Strikes; Others Demand End To COVID-19 Lockdowns : Coronavirus Updates Grocery store and warehouse workers are calling for sick leave and hazard pay, while nurses will protest for more PPE. And others are targeting stay-at-home orders. 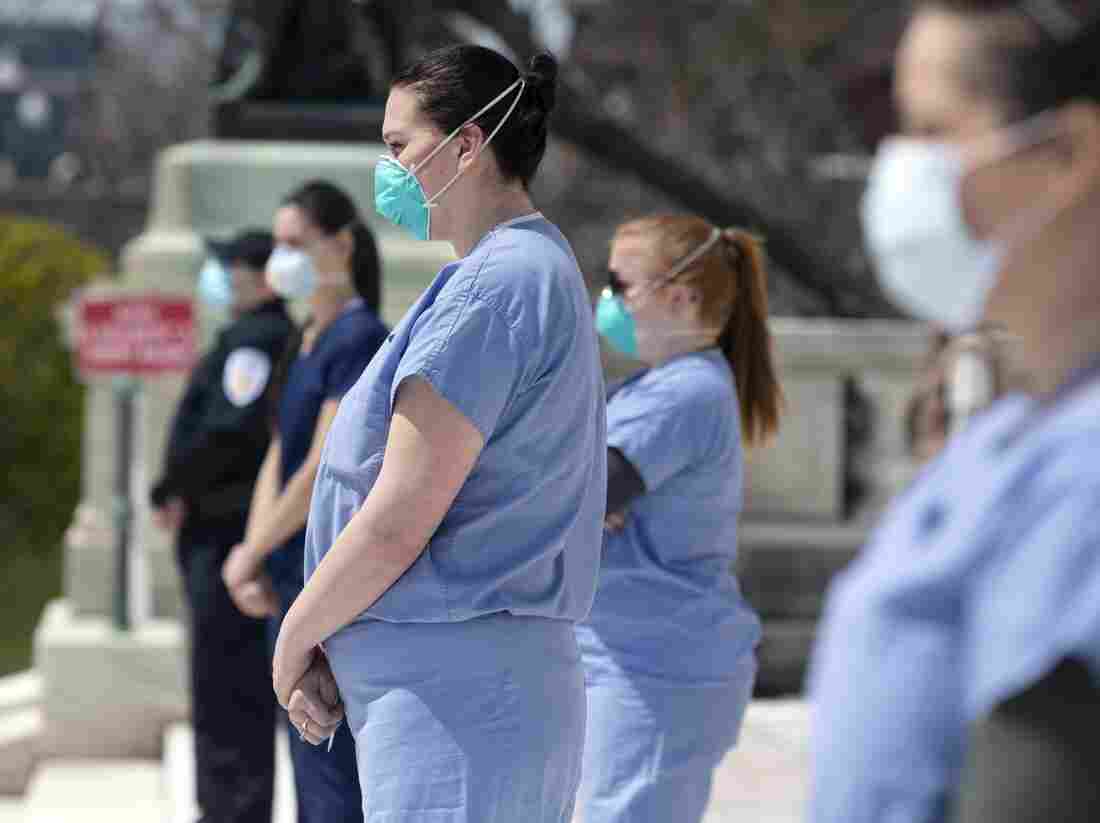 Nurses stand in counterprotest during a demonstration against stay-at-home orders due to coronavirus concerns, at the State House in Providence, R.I., on Saturday. Michael Dwyer/AP hide caption 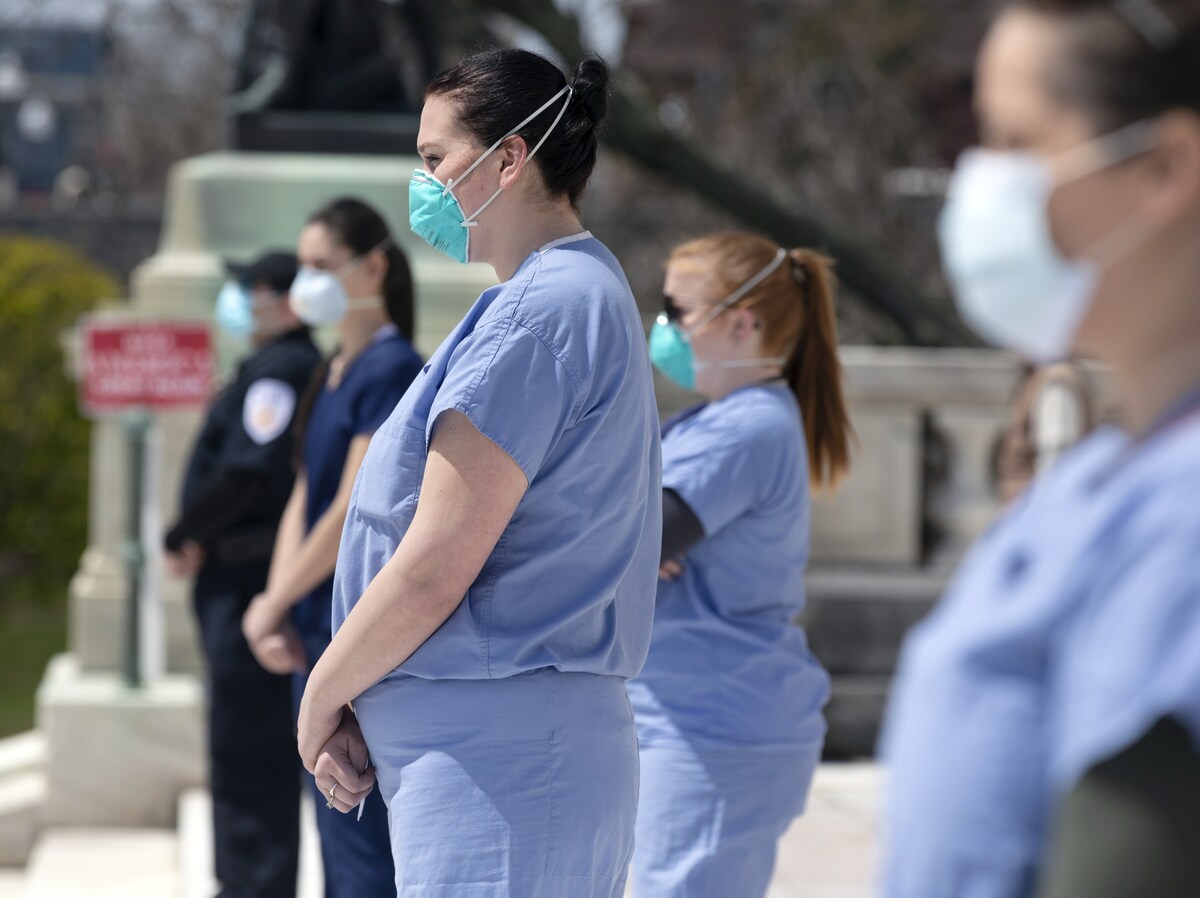 Nurses stand in counterprotest during a demonstration against stay-at-home orders due to coronavirus concerns, at the State House in Providence, R.I., on Saturday.

Employees at many online retailers, grocery store chains and package-delivery services are planning labor actions Friday to protest what they describe as unsafe working conditions amid the COVID-19 pandemic, while others, put out of work by the disease, are using May Day to demand an end to stay-at-home orders they say are ruining livelihoods and irreparably harming the economy.

Meanwhile, nurses at scores of hospitals across the country plan to take to the streets to protest a lack of personal protective equipment; and independent truckers, fed up with low freight rates, plan a congestion-inducing "slow roll" in their rigs through parts of Los Angeles, Chicago, Washington and other major cities.

The May Day protests come as the country is on edge, with more than 1 million confirmed infections and some 63,000 deaths attributed to COVID-19 and after weeks of stay-at-home orders that have put a fifth of the nation's workforce out of a job, while employees deemed essential risk exposure to the novel coronavirus just by showing up to work.

May Day: nurses will join with other members of the University of Chicago Labor Council and South Side community members for a May Day march to protest the university’s unfair labor practices and union busting efforts. https://t.co/cXxBecYkeD pic.twitter.com/mNvEZg3xYW

Many of those essential workers are in low-wage jobs, working in grocery stores and warehouses without paid sick leave or health benefits.

Employees at Amazon, its subsidiary Whole Foods, Target, FedEx and other companies have been forced to work in unsafe conditions at the front lines of the pandemic. Many will either stage mass sickouts or simply walk off the job Friday in various cities to demand time off, hazard pay, sick leave, protective gear and cleaning supplies, The Associated Press reports.

Whole Foods, Amazon, Target, and Instacart workers are striking on May 1st pic.twitter.com/nwnMhxxffy

Workers at Whole Foods, for example, say the company's flawed policies have caused some workers to contract COVID-19.

"For these reasons, we are engaging in a mass sickout and exercising our right to refuse unsafe work conditions," according to a statement by Whole Foods workers.

Amazon says it has spent more than $800 million on COVID-19 safety measures including masks, hand sanitizer, gloves and hand-washing stations at warehouses — some of which have become hot spots for the spread of the virus. Meanwhile, Walmart says it is conducting daily temperature checks and providing masks and gloves to its store employees and warehouse workers.

Nurses in 13 states are demanding masks, gloves and other protective equipment they say they need to do their jobs of caring for patients sickened by COVID-19. Many say they are disciplined if they speak out against the problem. More than 60 nurses across the country have died of COVID-19, according to organizers.

"Nurses signed up to care for their patient. They did not sign up to sacrifice their lives on the front lines of the COVID-19 pandemic," Bonnie Castillo with National Nurses United was quoted by the AP as saying.

Many of the same groups who are planning labor actions on Friday have staged smaller protests in recent weeks.

Lockdowns were to keep the curve under the capacity of the healthcare system. We’ve done that...so now what.

Governors won’t consider the next phase due to models and medical experts that have been wrong much more than right.

Among the most visible have been protesters in Michigan and California, some armed, who have staged angry protests demanding an end to the lockdowns. 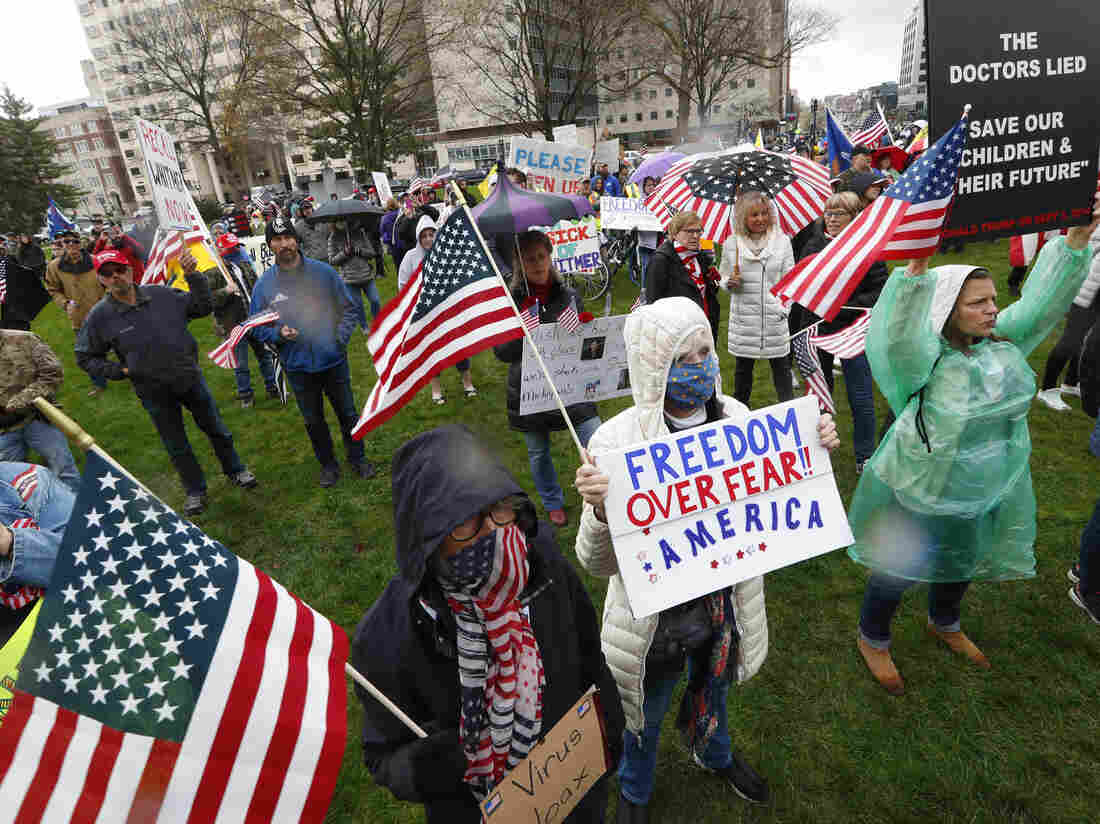 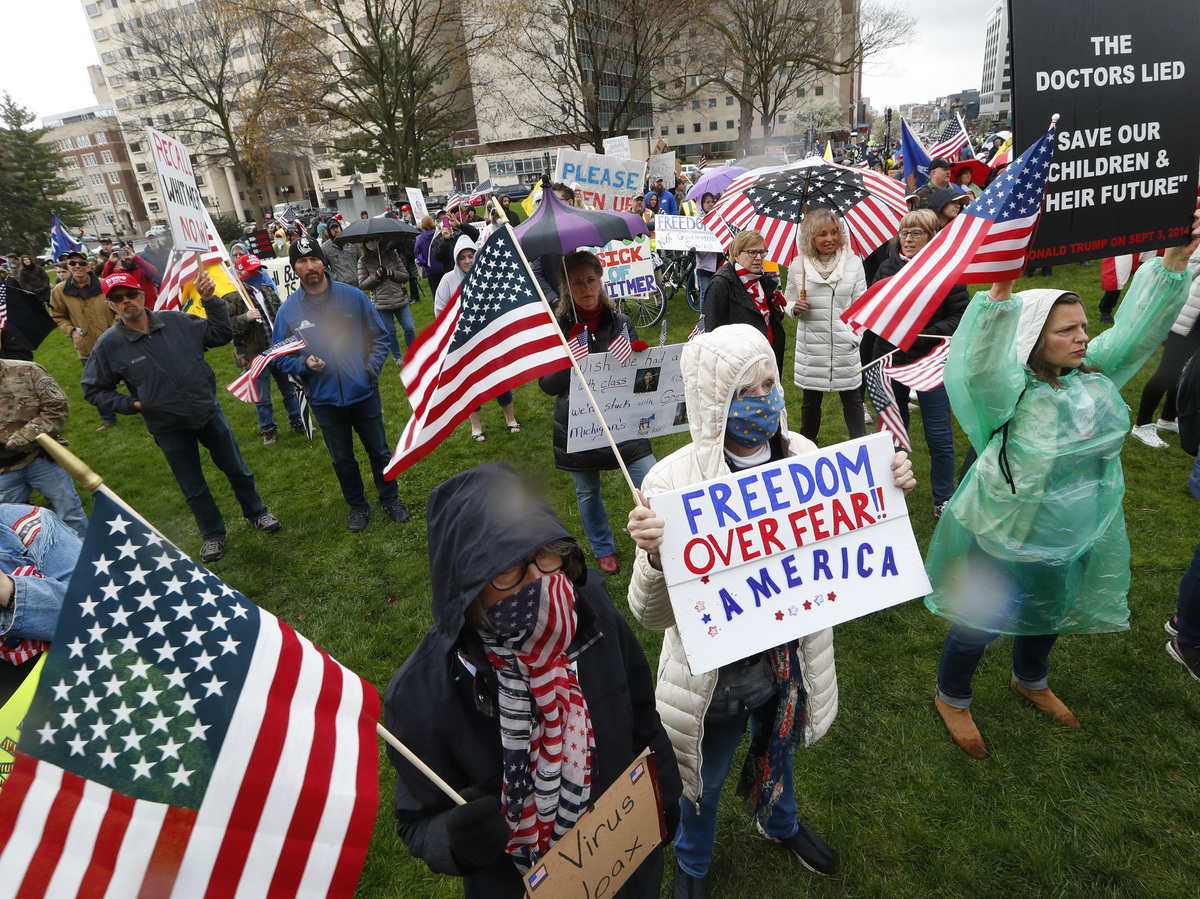 Anti-lockdown protesters rally at the state capitol in Lansing, Mich., on Thursday.

In Michigan on Thursday, hundreds of protesters swarmed the state capitol to denounce a stay-home order, some calling COVID-19 a "hoax." They held signs that said, "The Doctors Lied" and "Freedom Over Fear."

Mardelle Messenger, a protester from Perry, Mich., told Michigan Radio that even though she's high-risk for COVID-19, she hasn't been following the stay-at-home order. "People are willing to just lay over and play dead and let their rights be trampled on," she said. "I don't agree with that."

More such protests were planned on Friday in Los Angeles and other Southern California cities.

Organizers have planned "MAGA May Day" car rallies in 50 U.S. cities to show support for President Trump, whose campaign slogan was Make America Great Again, and to call for an end to the lockdowns. Similar protests are also planned for Chicago, and in Long Island, N.Y.

"This will be a 'drive-in' rally for freedom. Get in your car, on your motorcycle, RV or whatever mode of transportation you desire and join the Drive for Freedom," the group said on its website, according to the Miami Herald.

"All you need is your car, tank full of gas, an American Flag, signs, window chalk/shoe polish for the windows and a good music play list," the event listings say, adding, "Be sure to wear your MAGA gear."