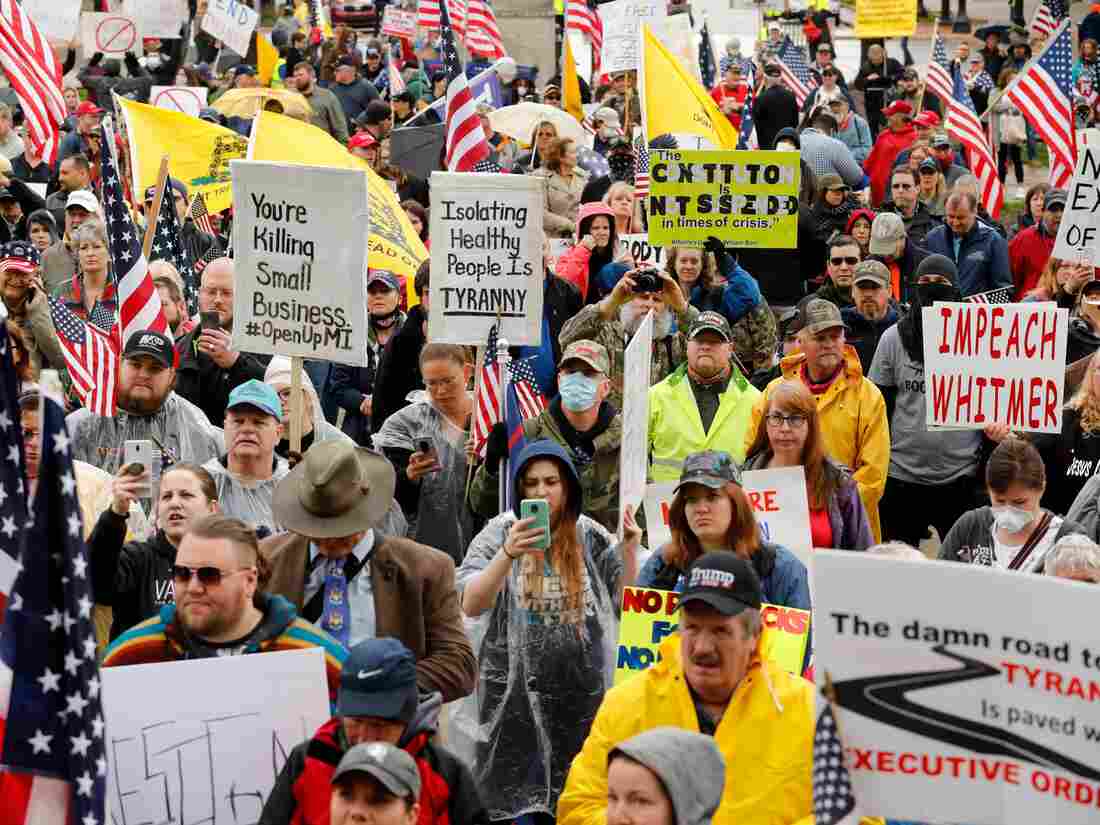 Demonstrators take part in a rally organized Thursday by Michigan United for Liberty on the steps of the Michigan State Capitol in Lansing, demanding the reopening of businesses. Jeff Kowalsky/AFP via Getty Images hide caption 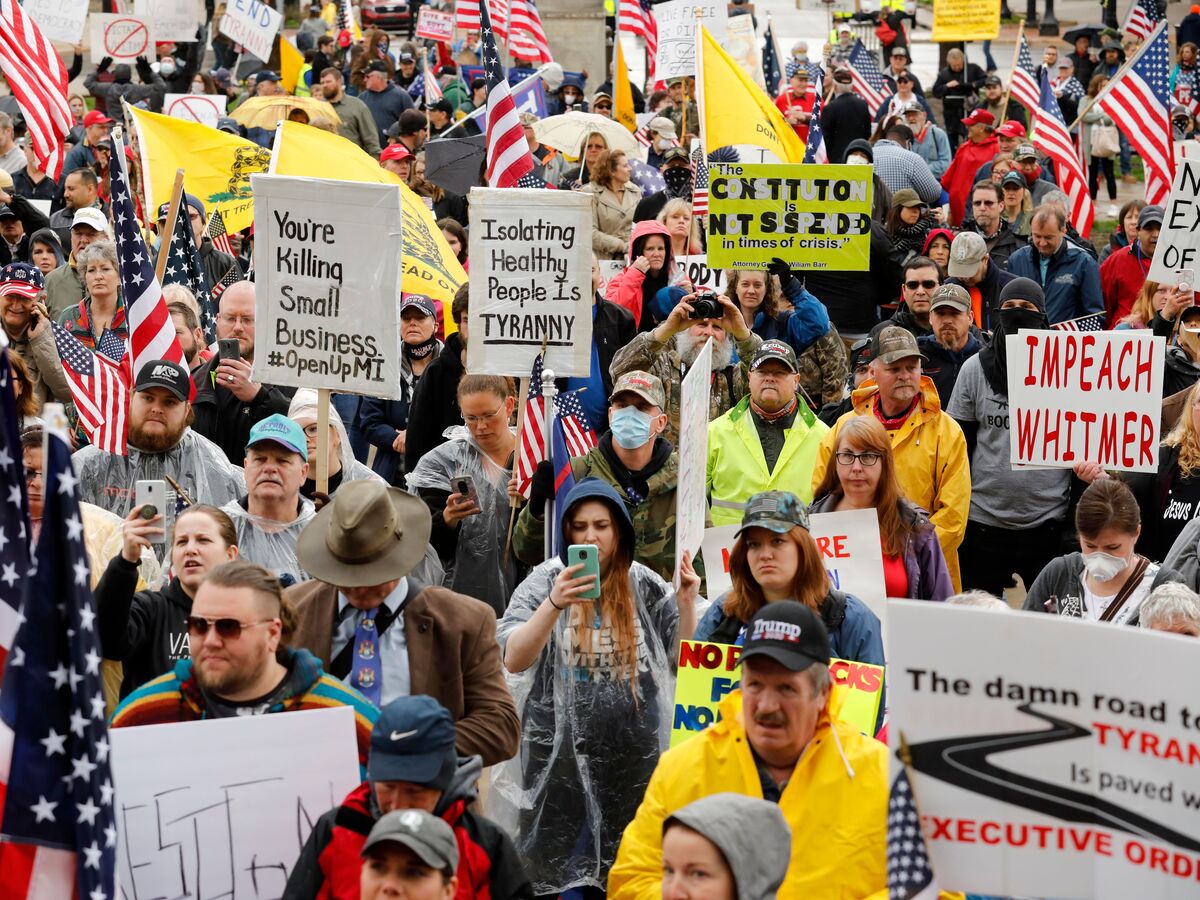 Demonstrators take part in a rally organized Thursday by Michigan United for Liberty on the steps of the Michigan State Capitol in Lansing, demanding the reopening of businesses.

Hundreds of protesters — some of them armed with rifles — massed outside Michigan's Capitol building Thursday to denounce the state's stay-at-home orders. At the same time, lawmakers and the state's governor faced off in a battle over the response to the COVID-19 pandemic.

For the second time in roughly two weeks, protesters defied social distancing guidelines and took to the Capitol lawn over emergency declarations that have closed down many of the state's nonessential businesses and largely confined Michigan residents to their homes.

Many of the demonstrators carried signs reading "Free Michigan" as they called out Democratic Gov. Gretchen Whitmer, who extended the emergency order through May 15.

A contingent of gun-wielding men even filed into the legislative building as lawmakers considered ways to restrain the governor's powers — especially her ability to extend an emergency declaration.

State Police standing in a line to block protesters who apparently want to go into the House chamber: pic.twitter.com/1mHmYB8wo4

One protester, Tim Rugg, a firefighter from Oakland County, Mich., likened Whitmer's recent extension of the stay-at-home order to a "tyrannical takeover."

"Yeah, there's a virus, but it's more of a politician problem that it's gotten this far. There's no reason for us to be locked down. She's trashing our state," Rugg told member station Michigan Radio. 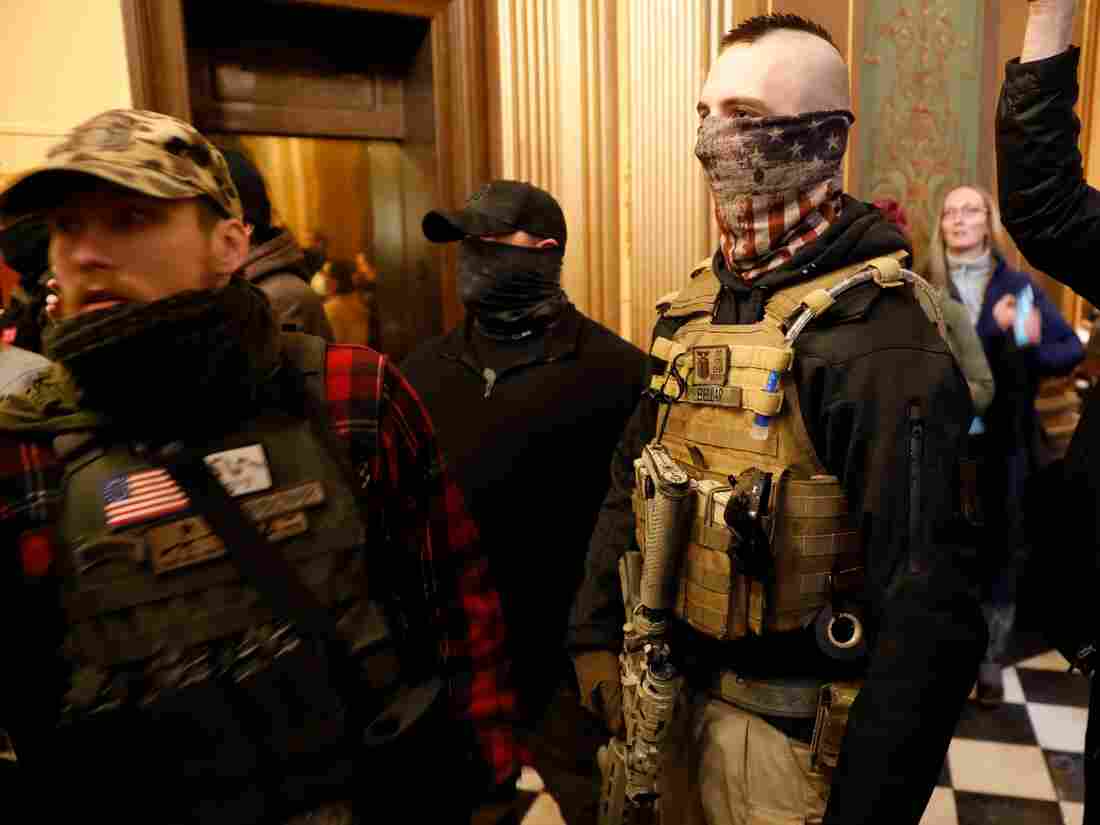 Protesters try to enter the chamber and are being kept out by police during a protest in Lansing, Mich., on Thursday. Jeff Kowalsky/AFP via Getty Images hide caption 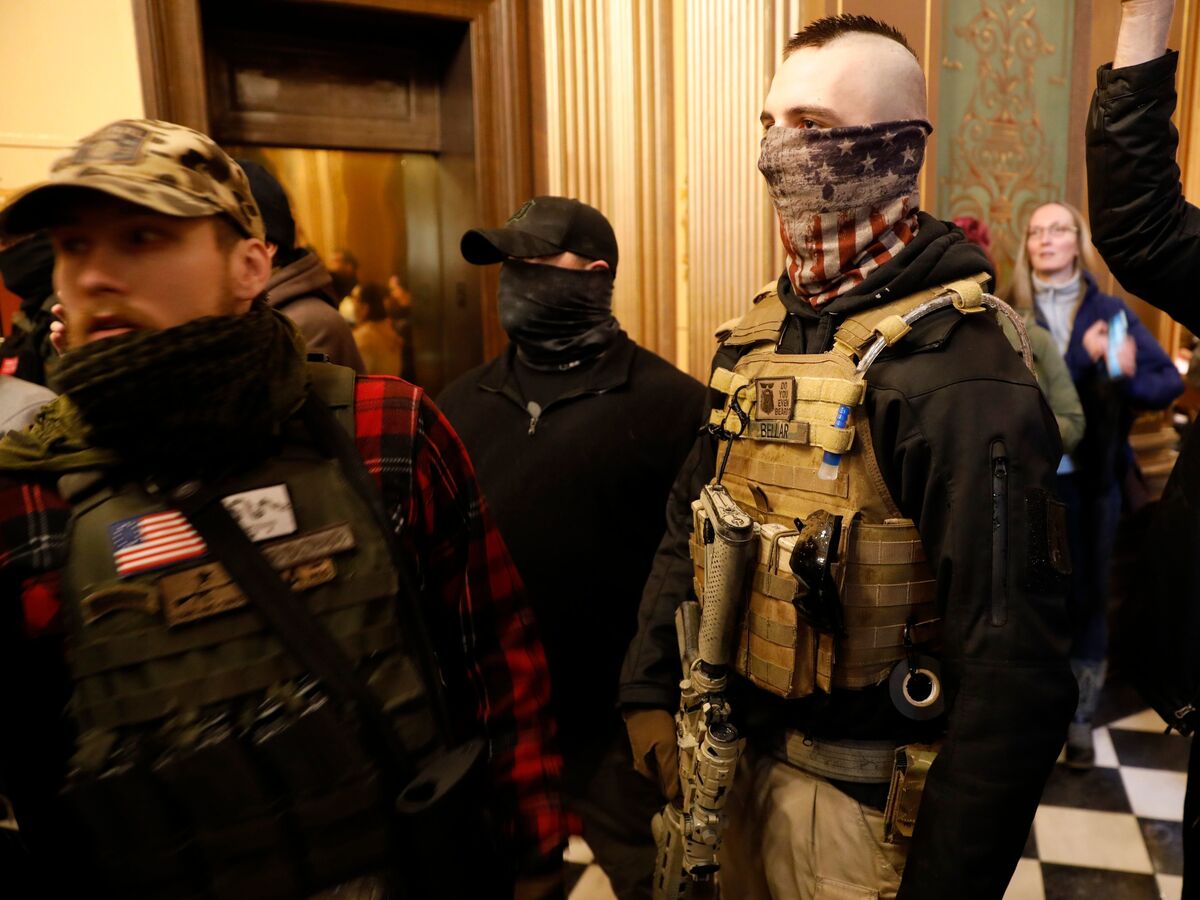 Protesters try to enter the chamber and are being kept out by police during a protest in Lansing, Mich., on Thursday.

Michigan had more than 41,000 confirmed cases of COVID-19 and more than 3,700 people have died in the state because of the disease as of Thursday, according to Michigan Radio.

Other demonstrators took the governor to task over the economic repercussions of shuttering nonessential businesses, including Teresa Goodman, a grocery store worker who said she once backed the restrictions.

"There are so many people that are not as lucky as us to be able to still have a paycheck right now, and they can't feed their families because of trivial orders that are violating their constitutional rights," Goodman told Michigan Radio.

President Trump also tweeted his apparent support for the protesters.

This is the scene on the Michigan Capitol lawn right now where protesters affiliated with a myriad of groups are staging a protest partly against the stay at home order, partly against Governor Whitmer on the day her emergency declaration is set to expire. 200-300 ppl our here. pic.twitter.com/iZDuIMqdEk

As the protest went on, Republican lawmakers and Whitmer duked it out for control over how the state should handle the COVID-19 pandemic.

Lawmakers in both chambers of the Republican-controlled Legislature declined to approve extending Michigan's state of emergency Thursday. Instead, they passed a resolution that would allow them to take the governor to court over her authority to handle the state's response to the coronavirus crisis.

"We can no longer allow one person to make decisions for 10 million people," said Michigan Senate Majority Leader Mike Shirkey.

Despite those objections, Whitmer issued a new round of executive orders Thursday night that extend a state of emergency through May 28.

In a televised town hall event, Whitmer responded to lawmakers's effort to sue her.