Accessibility links
Shanghai Disneyland Sells Out Of Tickets For Post-Shutdown Reopening : Coronavirus Updates Visitors' health status will be checked on a smartphone app before they enter the park. Once inside, they will be required to wear face masks at all times unless they are eating. 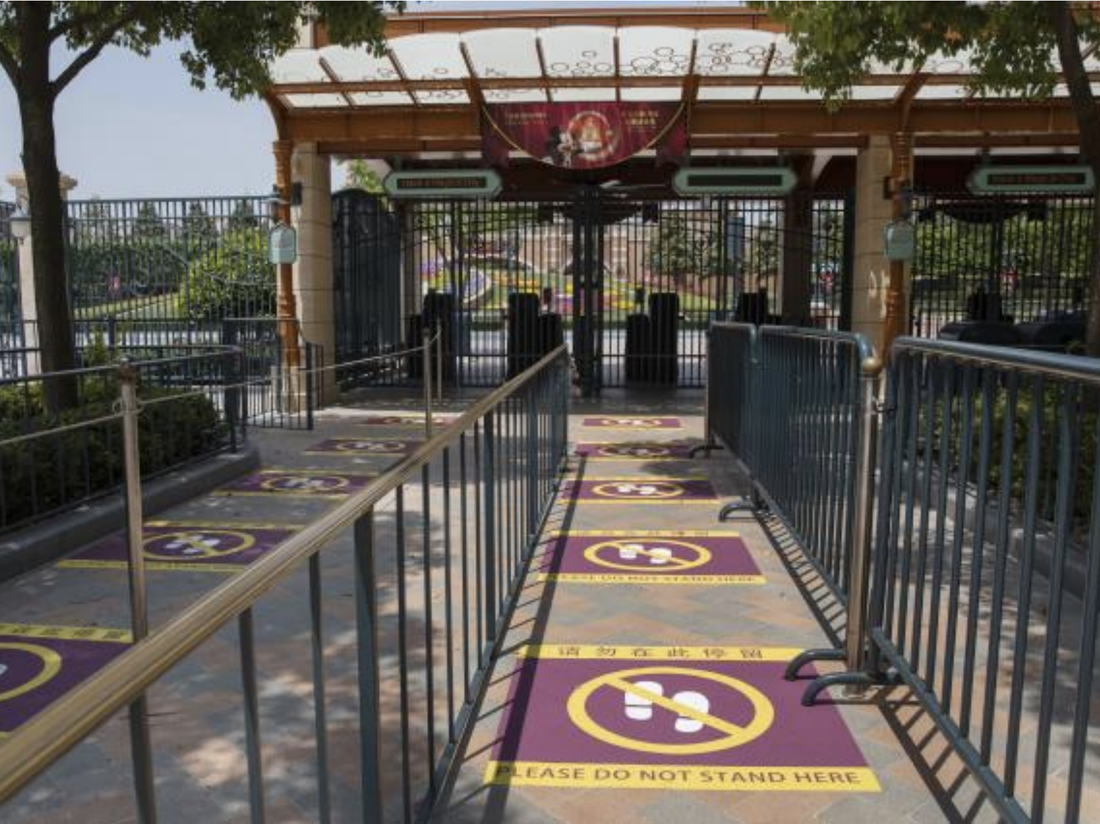 Visitors waiting in line at Shanghai Disneyland will need to maintain physical distancing as part of the theme park's plans to reopen on Monday.

It took only minutes for Shanghai Disneyland to run out of tickets to Monday's reopening as people jumped at a chance to visit the amusement park for the first time since the COVID-19 outbreak forced it to close in late January. Visitors to the theme park will be required to wear face masks at all times unless they are eating.

Shanghai Disneyland said it's taking "a deliberate approach" as it reopens. It will require physical distancing and sharply reduce capacity; some crowd-oriented features, such as children's play areas and theater shows, will remain shut down.

There will be no selfies with famous Disney characters, the company said. Hand sanitizer is being widely deployed, and cleaning measures have been stepped up.

Before they can enter the park, visitors will also need to prove they don't pose a coronavirus risk. They will undergo a temperature screening and a check of their personal QR code — reflecting their "green" or "red" status on a phone-based app. A green code, signaling a lower risk of COVID-19 infection based on recent travel and medical history, is required for many public activities in China during the pandemic.

"Only guests with a green Health QR Code will be allowed to enter the resort," Disney said.

Ticket prices for the theme park start at 399 yuan (around $56) for a standard weekday fare; prices rise to 499 yuan ($70) for weekend visits. After the Monday tickets were snapped up, other days in the reopening week were also sold out.

The move comes as Shanghai prepares to lower its emergency alert level to its third-highest setting; the Shanghai Daily reports that the city said it has not had a new confirmed local COVID-19 case since early March.

Large Disney parks and hotels in the U.S. and elsewhere remain closed. But as Florida relaxes some of its shutdown orders, the Walt Disney World Resort said stores and restaurants in its Disney Springs waterfront development in Orlando will begin a "phased reopening" on May 20.

The coronavirus has throttled Disney's businesses, leading the entertainment and media giant to warn of losses up to $1.4 billion in 2020's second quarter. The company has furloughed more than 100,000 employees.

Disney executives hope to reverse those trends, saying that now more than ever, there is a broad and deep appetite for optimism and happiness.

"People want good news. They want to experience joy and the feeling of togetherness," Disney's Executive Chairman and former CEO Bob Iger said this week on an earnings call.