Accessibility links
In Oregon Town, Volunteers Are Going Door-To-Door To Pin Down Coronavirus Infections : Coronavirus Live Updates In Corvallis, Ore, university volunteers are going into neighborhoods and offering residents a free self-test for the SARS-CoV-2 virus in hopes of getting a more accurate snapshot of infections.

Listen · 3:18 3:18
In Oregon Town, Volunteers Are Going Door-To-Door To Pin Down Coronavirus Infections 3:18 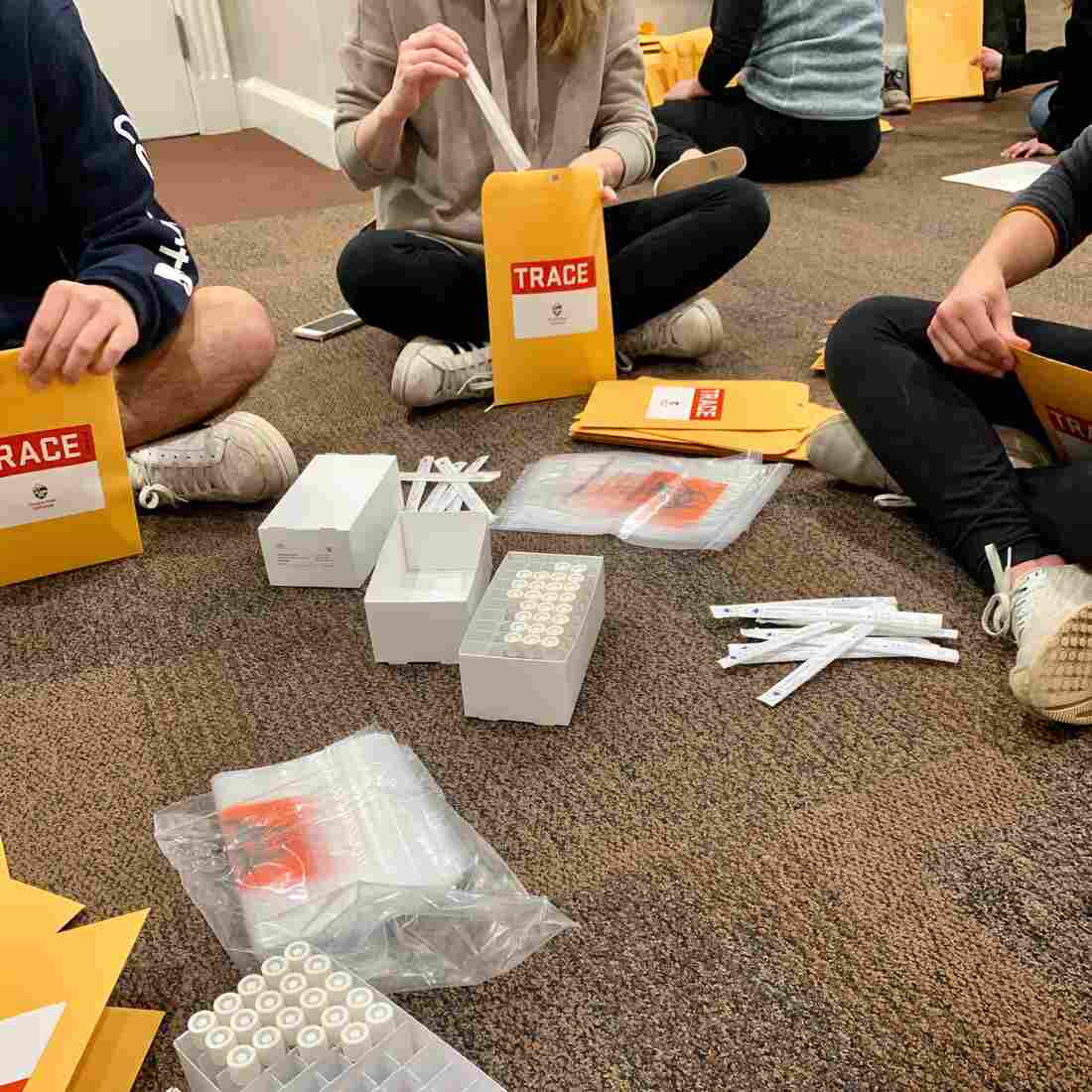 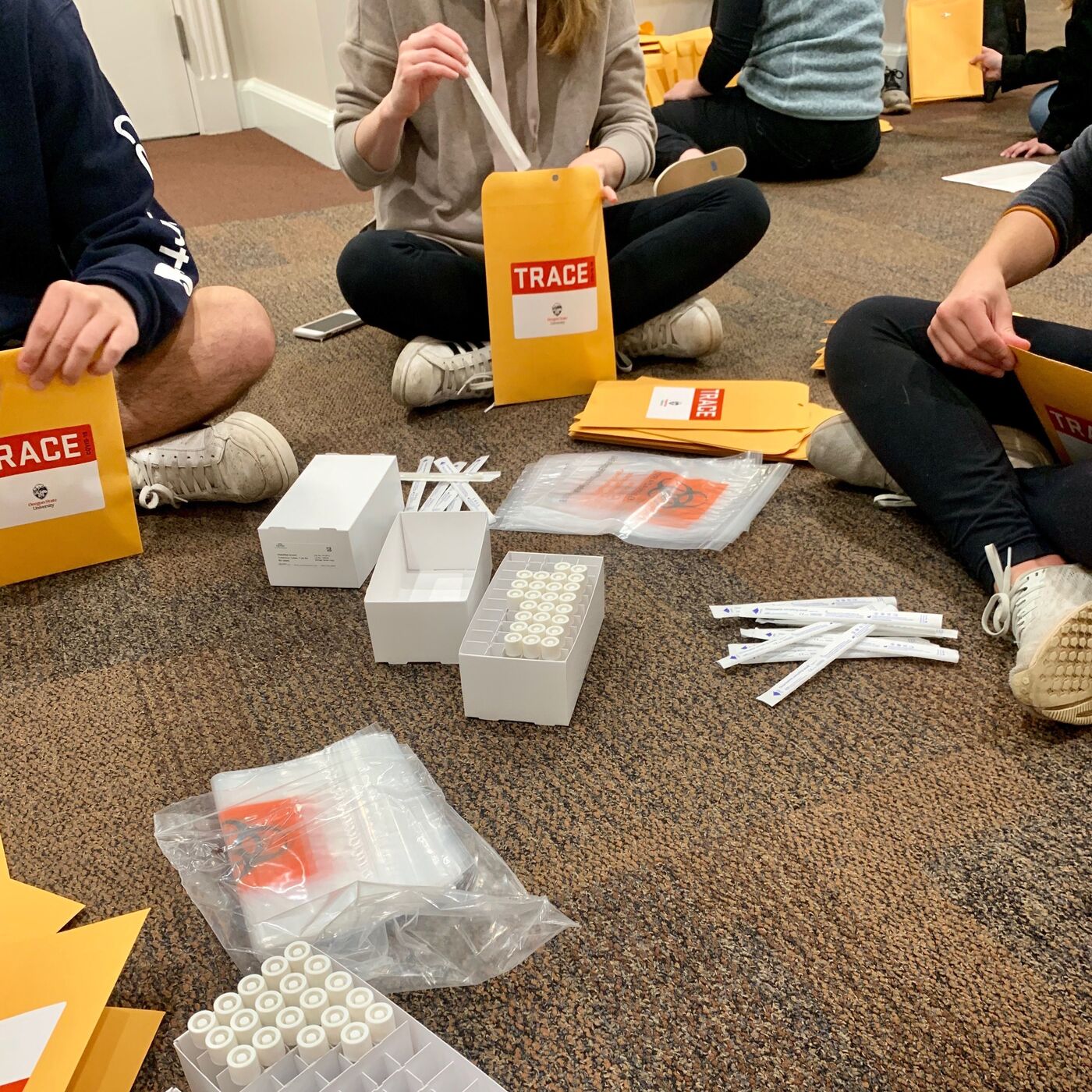 TRACE field staff assemble nasal swabs, collection tubes and other materials into home sampling kits. All field staff are tested for COVID-19 each week prior to working.

While authorities across the U.S. struggle to make policy without any hard numbers for how many people are actually infected with the coronavirus, Oregon State University has launched a project to change that — at least for one small city.

The project is known as TRACE, Team-based Rapid Assessment of Community-Level Coronavirus Epidemics, and its leader, Ben Dalziel, says it has a straightforward goal: "To understand the prevalence of the virus in a community. In this case, Corvallis, Oregon."

Prevalence means how many people have the virus at any given moment.

The project officially kicked off on the weekend of April 25-26, and is expected to last four weekends. Maintaining social distancing, two-person teams from the university community go door-to-door in different neighborhoods, asking residents to participate.

If they agree, people take their own nasal swab, and the teams take the swabs back to the lab for analysis.

Participants can go online to get their results, which are also sent by mail.

The researchers chose the neighborhoods to provide a representative sample of the 58,640 people who live in Corvallis.

Because of a shortage of tests, the Centers for Disease Control and Prevention had originally recommended that priority for testing go to people who are sick and might be infected with the virus. Now, that list has expanded somewhat to include people such as healthcare workers or nursing home residents, who are at high risk of infection.

That misses people who may be infected but have no symptoms — at least not at the time they took the test. It's now pretty clear that such people can transmit the virus to others.

TRACE tests people whether they are sick or not.

The original proposal was to conduct 960 tests for four successive weekends. But Dalziel says that number was scaled back, because they've realized that it was more important to reach more neighborhoods, even if that meant fewer people per neighborhood.

So far, the team has only been able to look at the data from the first 455 people tested, but that allowed a preliminary assessment of prevalence.

Dalziel says the estimate is that two per thousand, or 0.2% of the town's residents, are infected.

"The prevalence of infections is often very low, even when there are a very large number of cases," says Marm Kilpatrick, who studies disease dynamics at the University of California, Santa Cruz. That's because prevalence only captures a snapshot of the illness, it doesn't include all the people who have gotten sick since the beginning of the epidemic.

Still, he says prevalence screening can be particularly helpful in identifying flare-ups of infection in a community.

"A study like this that actually screens people for infection, and doesn't require people going to a hospital, could detect that much earlier," he says.

"Two in a thousand is a level of prevalence that if we were to reopen too quickly, we would risk entering another epidemic exponential growth phase," he says.