Accessibility links
Wisconsin Bars Welcome Crowds After Court Strikes Down 'Safer At Home' Bans : Coronavirus Live Updates One bar posted an image of a crowd, along with the caption: "45 minutes after the bars open in Wisconsin." 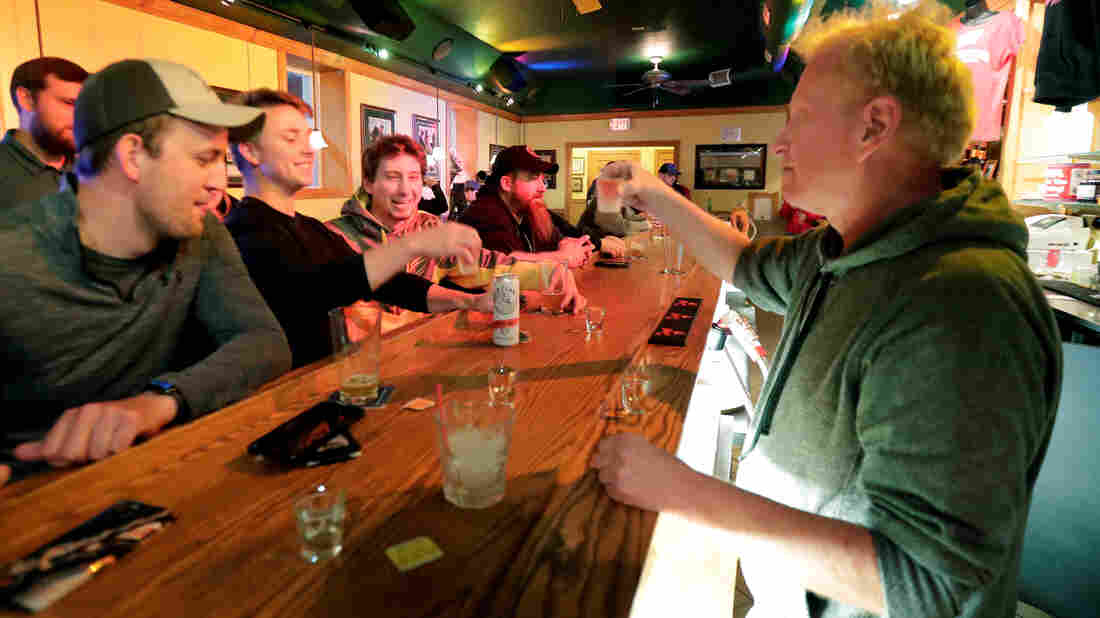 Bar owner Michael Mattson toasts with patrons as his Friends and Neighbors bar reopens Wednesday in Appleton, Wis. Bars were able to open their doors after the Wisconsin Supreme Court struck down the state's "Safer at Home" order. William Glasheen/USA Today via Reuters hide caption 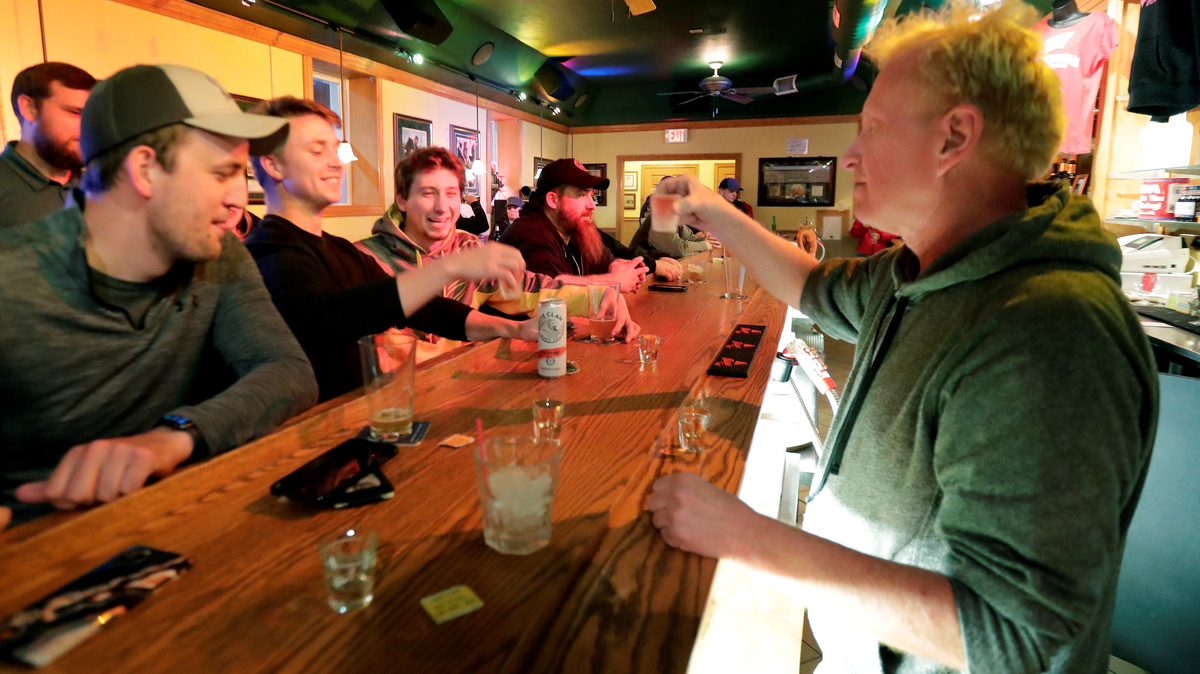 Bar owner Michael Mattson toasts with patrons as his Friends and Neighbors bar reopens Wednesday in Appleton, Wis. Bars were able to open their doors after the Wisconsin Supreme Court struck down the state's "Safer at Home" order.

People flocked to bars in Wisconsin on Wednesday night, after the state Supreme Court voided the state's "Safer at Home" orders. The ruling quickly triggered a jumble of policies in counties and cities, as officials set their own rules related to COVID-19.

The court found that emergency orders issued by Gov. Tony Evers' administration were unlawful and unenforceable, prompting the Tavern League of Wisconsin, an industry group, to issue a statement encouraging all tavern and bar owners to open their doors immediately.

And some did just that. A photo posted by Nick's Bar in Platteville quickly went viral, showing at least 18 people crowded together at the bar, just 45 minutes after Wednesday night's reopening.

45 minutes after the bars open in Wisconsin.... pic.twitter.com/xqaDlS6ajP

The industry group also urged its members to follow safety tips from the Wisconsin Economic Development Corporation, including a suggestion that employees wear face masks and gloves, and to practice social distancing. But in the image from Nick's Bar, no one is wearing a mask.

The court ruling set off confusion — and debates on social media — over when the Safer at Home restrictions would be lifted. The initial legal request had sought a delay before any changes take effect.

"Republicans originally asked the court for a six-day stay which would have kept the current Safer at Home order in place while a new one is negotiated to replace it," as Wisconsin Public Radio reports. "But the court instead decided to strike down the order effective immediately."

Local governments, such as the City of Milwaukee and Dane County (which includes Madison), rushed to enact their own restrictions that echo the state's "Safer at Home" order.

Responding to the Tavern League's release about the ruling, some bar owners said they would still wait to open, citing reasons that range from uncertainty over the policy in their communities to ongoing remodeling work during the shutdown. But many proprietors welcomed the news that they can reopen to sit-down service after being limited to carryout and delivery orders since March.

The timing of the court decision was perfect for the Iron Hog Saloon in Port Washington. The establishment's owner, Chad Arndt, said last week that he would open his doors to customers on Wednesday at 3 p.m. — no matter what the court decided. It was a question, he said, of economic necessity.

"We will be taking all precautions with keeping everything sanitized the best we can and distancing people that are together, Arndt wrote. "Please If you don't feel like you are ready to come out yet don't! I will respect your feelings and decision to stay home and self-quarantine, I am asking you to please respect mine to not. I need to not only make sure I can keep making a living but I need to make sure my employees and [their] families can as well."

After being open Wednesday night, Arndt thanked patrons for their support, prompting one commenter to write, "Will always support those who stand up for liberty!!!"

But another commenter was displeased: "I didn't realize there are so many selfish, inconsiderate and spoiled babies in Wisconsin. They couldn't handle a lockdown for the good of themselves and their fellow Wisconsinites. Not as tough as they think, I guess."

In Chippewa Falls, Loopy's High Shores Supper Club says it will reopen Thursday afternoon for customers who want to dine in, along with maintaining its takeout and delivery service.

"We will be taking proper precautions for the safety of our customers and staff," the restaurant says.

The post set off a number of positive responses, including one woman who simply wrote, "I need a drink."