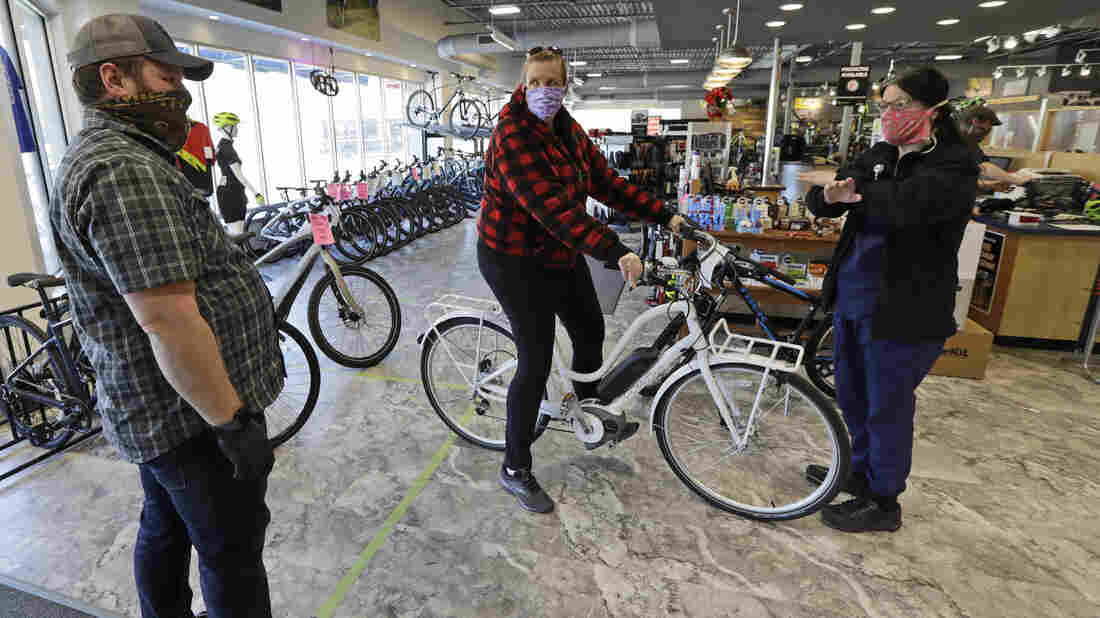 Store manager Josh Hayden, left to right, talks with Kay Amey and Jackie Gee about a new bicycle at Eddy's Bike Shop on Tuesday in Willoughby Hills, Ohio. Bike shops in most states were exempt from shutdown orders and sales have been up. Tony Dejak/AP hide caption 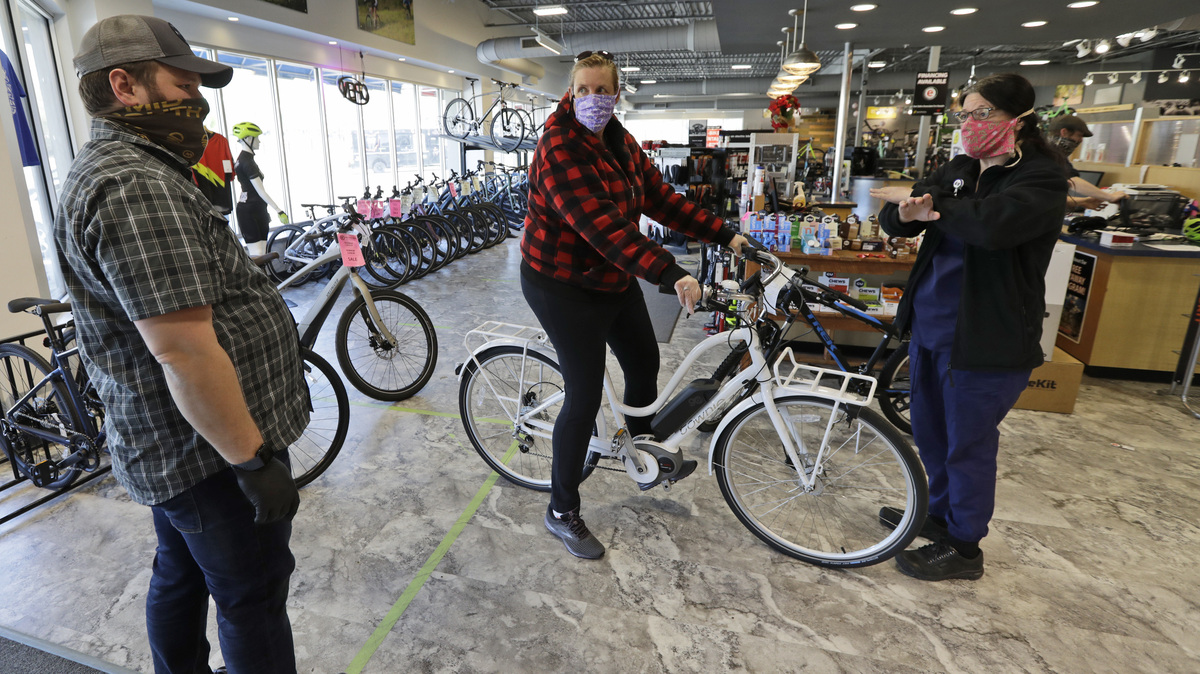 Store manager Josh Hayden, left to right, talks with Kay Amey and Jackie Gee about a new bicycle at Eddy's Bike Shop on Tuesday in Willoughby Hills, Ohio. Bike shops in most states were exempt from shutdown orders and sales have been up.

Sales are booming at many bike shops around the country, as people stuck at home try something new for exercise and essential workers adapt to scaled-down public transit.

It's an especially opportune time for those who might otherwise be nervous about sharing the streets with cars — mayors across the country have closed streets to encourage cyclists and joggers to exercise.

"Stores are doing really well, and store owners who I've spoken to over the past couple months are almost sheepish in admitting that because they understand it's a pandemic," says Morgan Lommele, director of state and local policy at the industry coalition group People for Bikes.

In the majority of states that issued stay-at-home orders, bike shops were deemed essential businesses that could stay open, according to tracking by the League of American Bicyclists.

Bike sales in March were up by 50% over last year, the market research firm The NPD Group found. Including stationary exercise bikes, sales grew by 31% in the first quarter of the year over the same time last year.

"We're seeing families, individuals riding bikes in droves, more than we've seen over the last 20 years," said Lommele in an interview with NPR's All Things Considered.

Many retailers are running low on bikes, which often have to be ordered from manufacturers far in advance. "There was no way to really predict this back in December and January," Lommele says.

The pandemic has also forced new stresses onto bike shop employees, who must now contend with social distancing and cleanliness guidelines in a hands-on business.

And a large part of any bike shop's operations are not just sales, but service. When someone who hasn't ridden in years dusts off the old Schwinn for a socially distanced ride, it will need a tuneup.

But many shops have closed voluntarily or sent employees home. As of a month ago, an estimated 20-30% of shops were closed, according to Bicycle Retailer and Industry News.

That means more demand for repairs at the shops that stayed open. Independent bike shops saw repairs go up by 20%, The NPD Group found.

"There's this environment where, sure, shops are seeing record-level sales, record-level demand for service, but their employees are either staying at home or on restricted schedules," Lommele says.

Retailers and manufacturers are talking about a "mini bike boom." It's a shift from the focus of the last couple years — tariffs.

The vast majority of bicycles and parts in the U.S. come from China. But the Trump administration, in various rounds of tariffs, put many bicycle parts under tariffs of 25% above normal rates.

Many bike products have since been granted exclusions to tariffs, but the exclusions are set to expire in August and September.

"The industry is generally worried that if those exclusions expire, those additional tariffs will be put back on those products," Lommele says. "And that will really harm our ability to provide a safe, low-cost product to Americans who want to ride bikes."