Accessibility links
'Better Than No Football At All': Germany's Bundesliga Restarts Season : Coronavirus Live Updates It became the first top international soccer league to resume after suspending play due to the coronavirus pandemic. But the decision to continue the tournament without fans remains controversial. 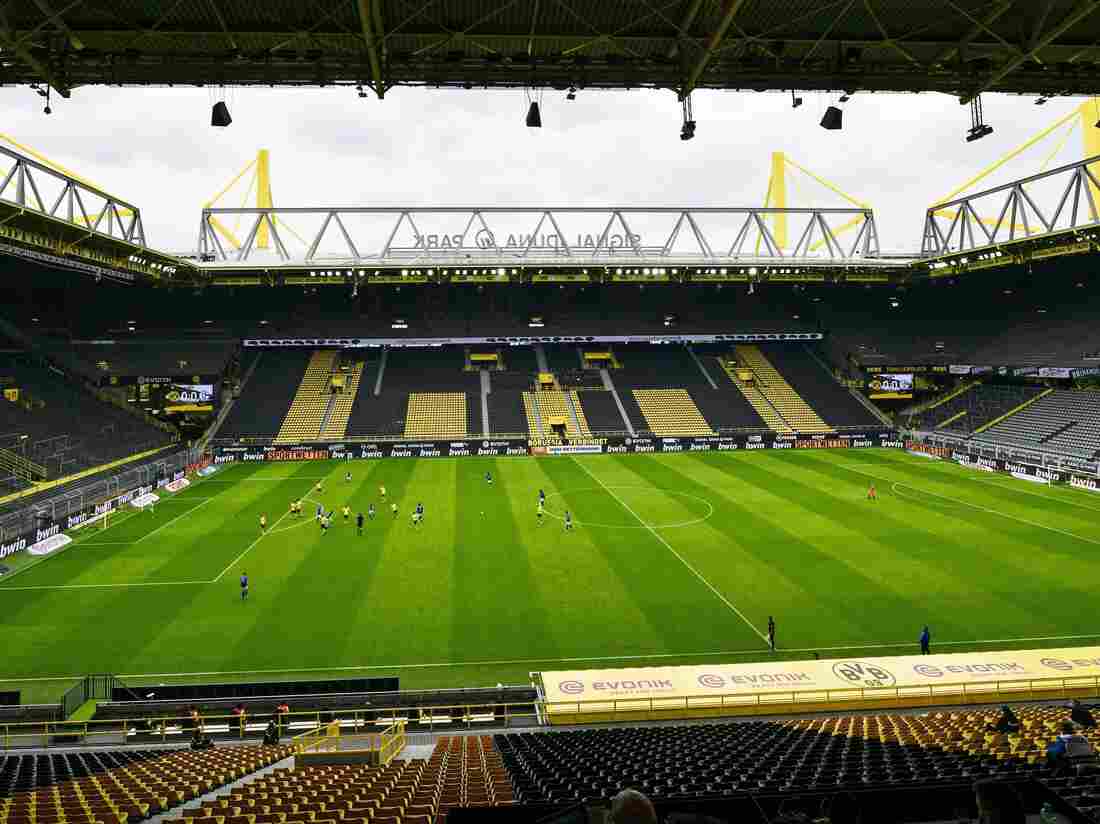 Empty seats are seen in the Signal Iduna Park without spectators during the German Bundesliga soccer match between Borussia Dortmund and Schalke 04 in Dortmund, Germany on Saturday Heinz Buese/AP hide caption 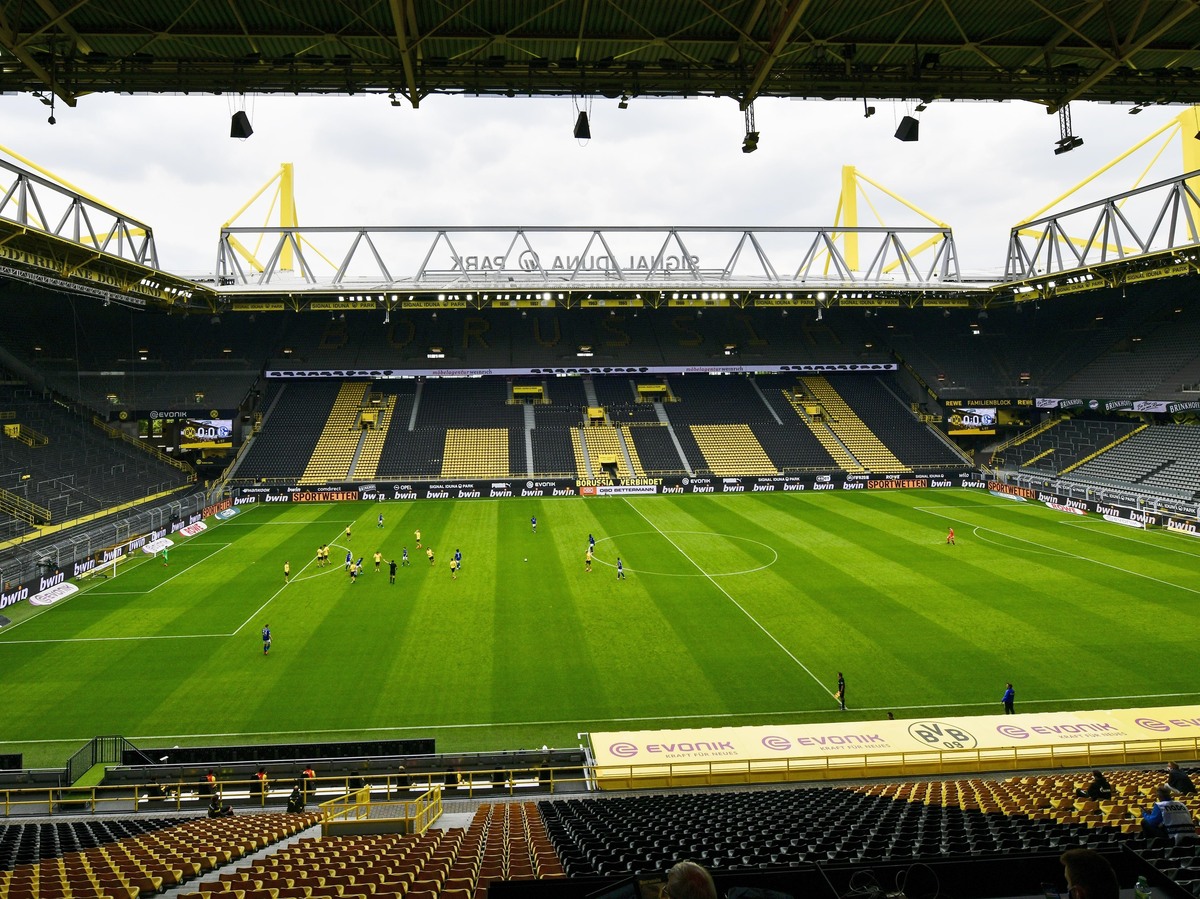 Empty seats are seen in the Signal Iduna Park without spectators during the German Bundesliga soccer match between Borussia Dortmund and Schalke 04 in Dortmund, Germany on Saturday

Germany's Bundesliga has become the first top international soccer league to return to the pitch after suspending its season due to the coronavirus pandemic in early March. The league restarted its season with a slate of six matches on Saturday, including the highly anticipated Revierderby (Ruhr valley derby) between Borussia Dortmund and FC Schalke.

The rivalry match set the stage for how the rest of the season will look, sound and feel. And while the product on the field largely delivered, it will take time for fans and players to get used to empty stadiums, substitute players wearing masks and virtual press conferences.

"I'd prefer it if the conditions would be normal," Dortmund midfielder Julian Brandt said. "But in the end, we all have to adapt."

Instead of the usual estimated 81,000-crowd packing into Dortmund's Signal Iduna Park for the derby against Schalke, the game's attendance was in the low hundreds. The Bundesliga's strict health protocol, which was developed in collaboration with health officials, means only players, staff, team officials, broadcasters and security personnel are allowed to be inside the stadium during games.

In an unusual sign of fan appreciation, Dortmund's players celebrated their 4-0 derby victory as they normally would. Following the game's final whistle, the players walked toward the Yellow Wall, which is the name of Europe's biggest standing room section that holds up to 24,000 fans. But this time, the Yellow Wall was completely empty. Only a handful of security members returned the players' applause.

Celebrating as if the ground was full 😂😂😂

The Dortmund players continue to do their traditional thank you to the Yellow Wall 🤣#BundesligaIsBack pic.twitter.com/e4XvVzJV1Y

"It happened spontaneously," said Brandt about the team's celebration. "We didn't talk about it beforehand. But overall, what's better than restarting the season with a victory."

The lack of spectators also meant that TV viewers could hear the shouts and screams of coaches and players as well as the thud a ball makes when it bounces off metal fences or concrete stands.

"Spectators are part of it, just like goals and coaches. We are all soccer-crazy, and therefore it's sad that fans can't be here," Freiburg coach Christian Streich said after his team's 1-1 draw against RB Leipzig.

For German Pay TV broadcaster Sky, the league's first matchday in more than two months was a ratings success. Sky's live simulcast of Saturday's five afternoon matches attracted 3.68 million viewers, which is more than double its usual viewership, according to DWDL.

The U.K.'s Independent newspaper called the Bundesliga's return a "piece of history" as it has set a precedent for other leagues to follow.

Yet in Germany, the Bundesliga's return remains controversial. While the two top leagues were allowed to restart their seasons this weekend, amateur and youth soccer leagues in the country remain suspended. A survey by German public broadcaster ZDF showed that 62% of people would have preferred a cancellation of the season. Only 27% agreed with the decision to finish the season without fans.

"I believe that fans will get used to it," Eintracht Frankfurt sporting director Fredi Bobic told ZDF show "Aktuelles Sportstudio" on Saturday. "But one thing is certain, neither the Ultras nor the regular fans want to see only 10 teams in the Bundesliga next year."

Germany's 18 top division clubs generated more than $4.3 billion in revenue last season. The Bundesliga is only trailing the English Premier League in terms of financial strength.

However, the German Football League (DFL), which operates the country's the first and second division, warned back in March that without TV income and a continuation of the season, some clubs could go bankrupt.

"Matches without stadium spectators are not an ideal solution for anyone. However, during this crisis, which threatens the existence of some clubs, it is the only option to preserve the leagues in their present form," DFL CEO Christian Seifert said in a statement earlier this month.