Accessibility links
102-Year-Old New York Woman Recovers From Coronavirus : Coronavirus Live Updates When Sophie Avouris of New York came down with COVID-19, her family did not expect her to recover. Avouris' doctor is not sure how she beat the illness. 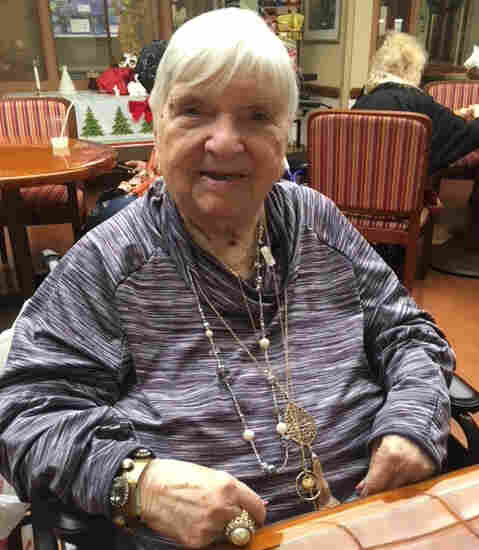 Sophie Avouris, 102, recently recovered from the coronavirus. She was a baby when the 1918 influenza pandemic spread across Europe. She lived through the Great Depression and World War II before emigrating from Greece to the U.S. in the 1950s. The Avouris Family hide caption

Sophie Avouris was a newborn in Greece when the 1918 influenza pandemic spread through Europe. Now, at 102, she has survived a coronavirus infection in a Manhattan rehabilitation center.

Not many people can say they have lived through both events.

"We just didn't think she would be able to make it," her daughter, Effie Strouthides, told NPR. "The doctor told us we couldn't come to visit her, but if it gets really serious and [toward] the end they would allow us to come and see her. So we were prepared for that."

In March, Avouris was recovering from hip replacement surgery in the Mary Manning Walsh nursing home in Manhattan when her doctor noticed something was off.

"She's a very talkative lady," Dr. Taimur Mirza told NPR. "She's the person that will often come up to the [nurse's station] and start up a conversation with the nurse or myself. She speaks Greek only, so in my case, I use Google Translate on my phone, and when she stopped doing that is when I got worried."

She got a fever the same day and tested positive for the coronavirus.

Her daughter was worried. The Centers for Disease Control and Prevention says that 80% of people who died of COVID-19 in the U.S. are 65 or older.

"The second time I spoke to her, she kept saying how sick she felt and that she couldn't even talk on the phone," Strouthides said.

Despite her age and congestive heart failure, she got better after two weeks. She has been asymptomatic for six weeks, although she continues to test positive for the virus.

"Even when she was really sick the doctors said she was still kind of spry. She would joke around a little bit or smile when he would come in. And I thought yeah, that's my mother," Strouthides said.

Avouris' doctor and daughter attribute her recovery to her strong constitution and also maybe her lifelong Mediterranean diet — but the true reasons still remain a mystery.