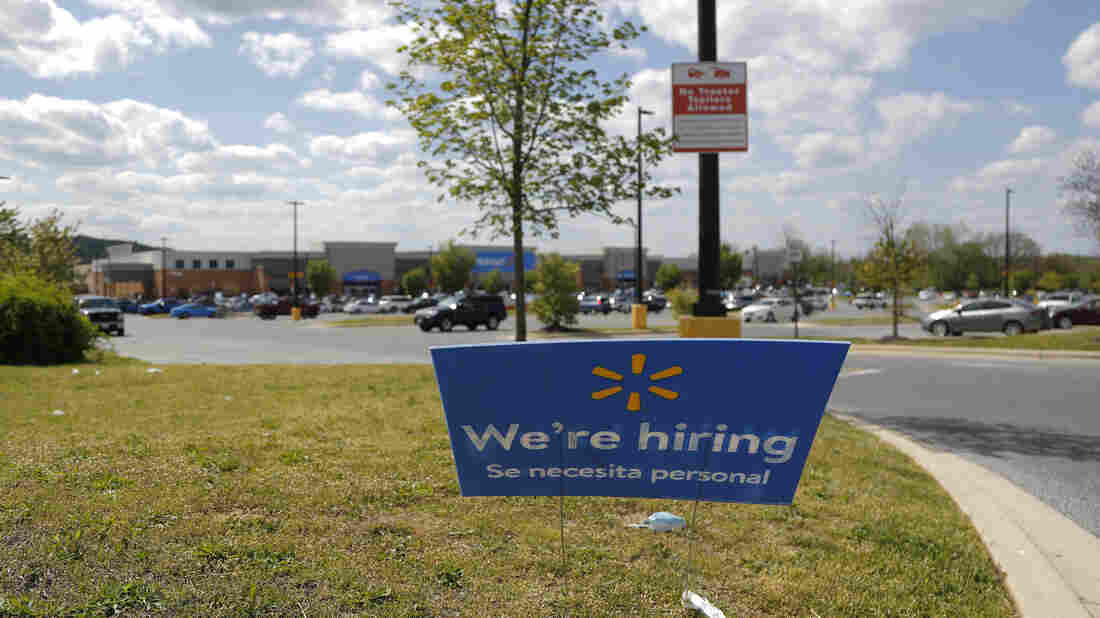 A Walmart store in Maryland seeks new workers during the coronavirus pandemic. The big retailer says it hired 235,000 new staffers to keep up with demand. Julio Cortez/AP hide caption 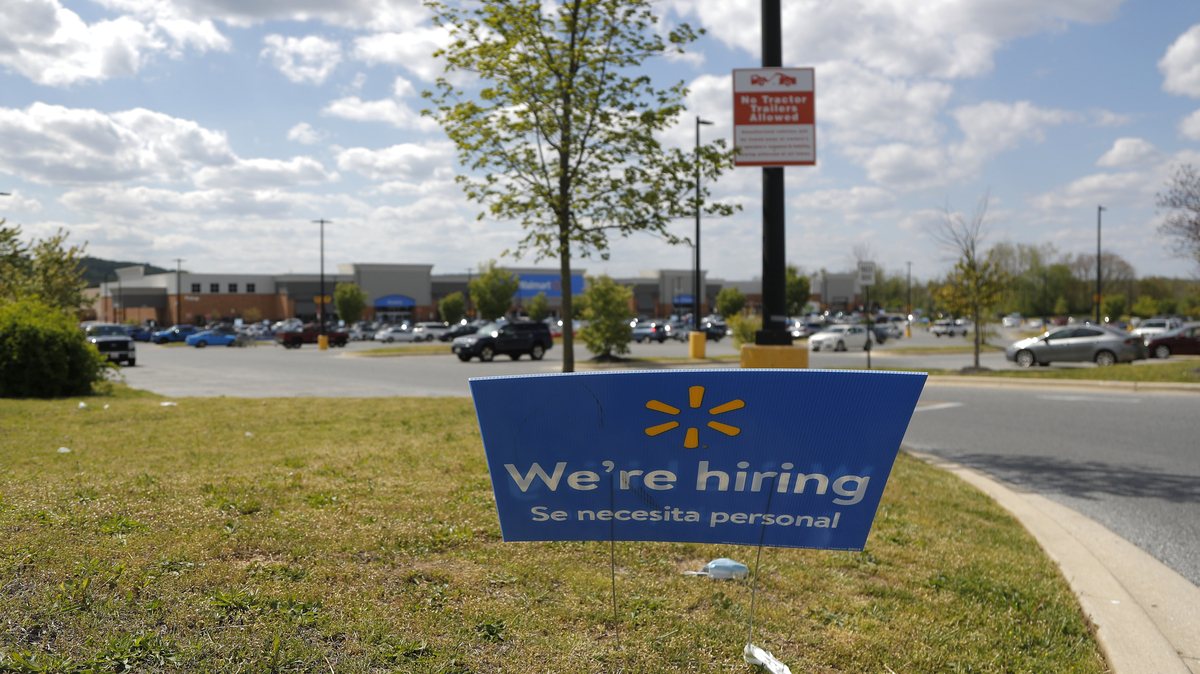 A Walmart store in Maryland seeks new workers during the coronavirus pandemic. The big retailer says it hired 235,000 new staffers to keep up with demand.

As the largest retail chain that remained open during the coronavirus pandemic, Walmart became a huge draw for shoppers. Its sales skyrocketed both in stores and online as people stocked up on food and necessities, as well as supplies to work out, teach, play and work from home.

The retailer says it hired a whopping 235,000 new workers during the health crisis to keep up with big demand at stores and warehouses.

Walmart's online sales jumped 74% to a new record as the company grew its home delivery and curbside pickup services. In stores, shoppers visited less frequently, but they spent almost 17% more per transaction, the company said on Tuesday as it became one of the first to report earnings from the months of the pandemic.

Walmart said its coronavirus-related costs also soared, amounting to some $900 million, which the company said mainly went toward temporary pay bumps and bonuses for workers.

Like many retailers, Walmart said it saw a slowdown in most categories, like clothes, at the start of the pandemic. But the company's soaring sales at Walmart and Sam's Club stores illustrate the big divide in the retail industry between "essential" and "nonessential stores."

Essential places like Walmart have continued to operate during the shutdowns of malls and stores, which are devastating clothing and other stores. Retail sales collapsed a record 16.4% in April. J.Crew, Neiman Marcus and J.C. Penney were some of the first dominoes to fall, declaring bankruptcy during the pandemic.

Walmart, meanwhile, saw shoppers come in waves. First, for a rush of people stocking up on paper goods, cleaning supplies and food — selling "in two or three hours what we normally sell in two or three days," CEO Doug McMillon said. Then, shoppers bought workout equipment, puzzles, video games, as well as mask-making, home-office and home-renovation supplies. Later in the quarter, the company says the federal economic relief payments started a new shopping wave for things like clothes, TVs and toys.

Walmart is seeing the benefits of its investments in recent years in its online and grocery-delivery services to compete with Amazon and others. During the pandemic, the retailer launched Express Delivery for some shoppers to get their purchases in less than two hours. It also expanded its options for curbside pickup of medications and purchases to be shipped from stores, among other things.

Walmart dramatically sped up its hiring process, McMillon said on Tuesday's earnings call, taking hours and days to complete the process that would otherwise take days and weeks. The company had previously said most of the new hires — often newly unemployed people from the recent mass waves of layoffs — are expected to be temporary workers.