Accessibility links
Indonesians Prepare For Eid Holiday Amid Concerns Over Spread Of COVID-19 : Coronavirus Live Updates Indonesia, with a population of 260 million, has confirmed more than 20,000 COVID-19 cases and more than 1,320 deaths, but many suspect the numbers are not a true reflection of the disease's reach. 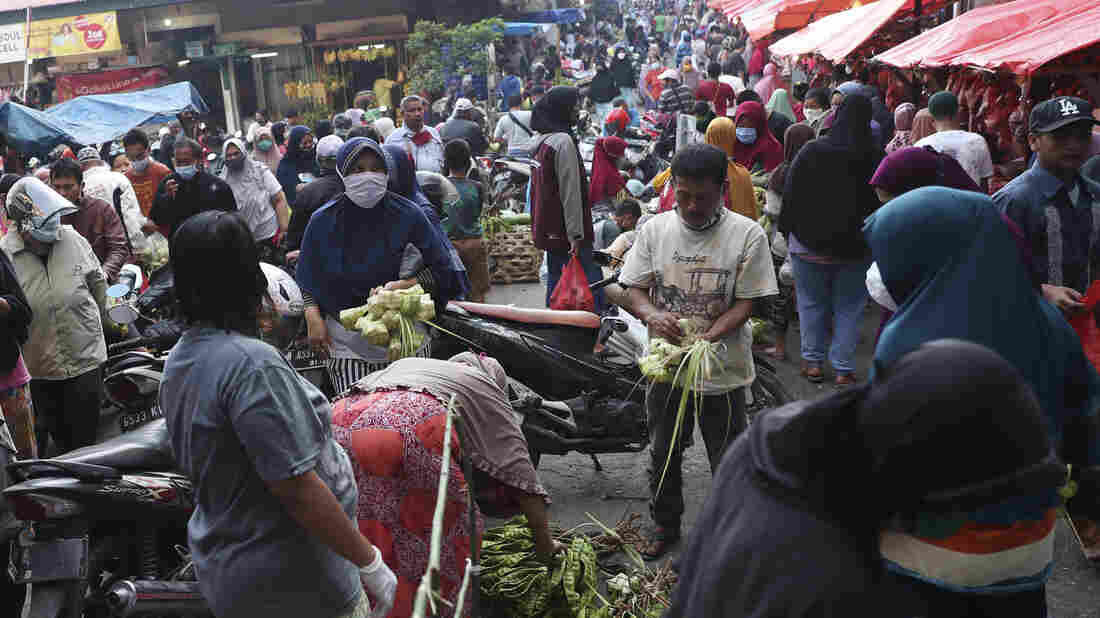 People shop in preparation for the Eid al-Fitr holiday at a market in Jakarta on Friday. Achmad Ibrahim/AP hide caption 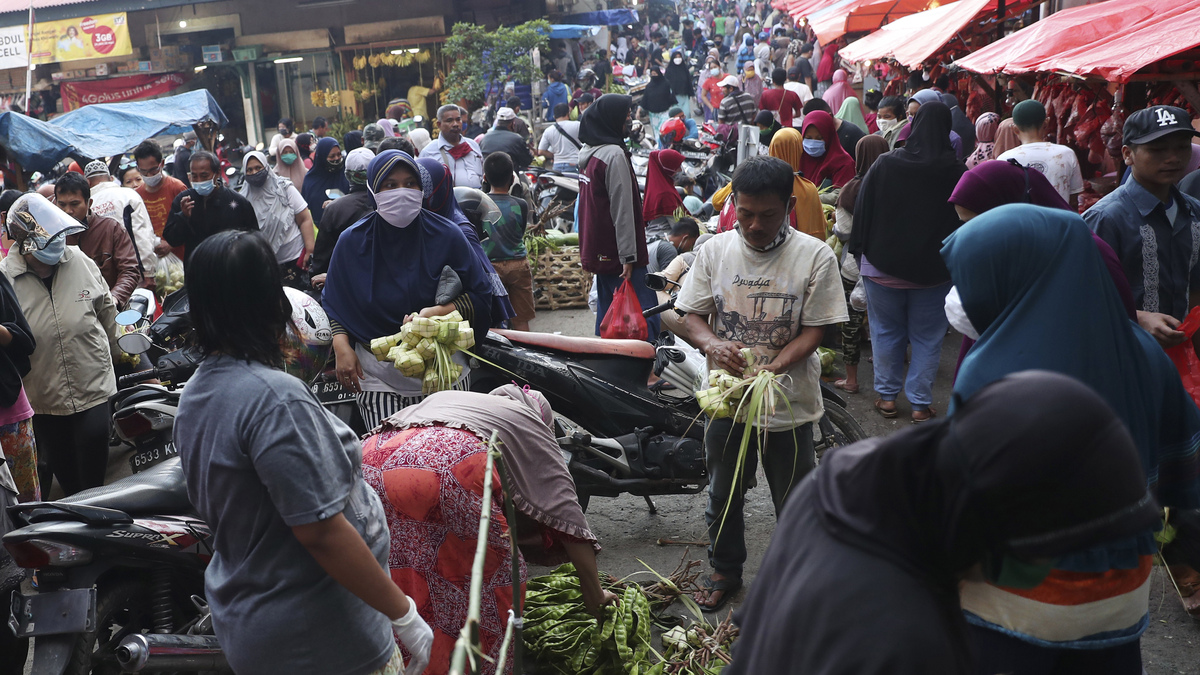 People shop in preparation for the Eid al-Fitr holiday at a market in Jakarta on Friday.

In Indonesia, the world's largest Muslim country, this weekend's Eid al-Fitr holiday marking the end of the holy month of Ramadan will involve mass travel, raising concerns about the effect it may have on the country's COVID-19 infection rates.

President Joko Widodo has said he will not yet ease large-scale social restrictions, insisting his government aims to keep citizens safe. But his administration has loosened some constraints by allowing public transportation to resume, including airlines, at 50% of capacity. Images have circulated on social media showing Jakarta's main airport packed with passengers ignoring physical-distancing rules.

In the midst of a coronavirus pandemic that saw nearly 1,000 new cases in a single day this week, the human "hurricane" this year will carry an estimated 20 million people, says Aaron Connelly, a research fellow with the Singapore-based International Institute for Strategic Studies.

Eid is to Indonesia what Christmas is the U.S., says Elina Ciptadi, a co-founder of Kawal COVID-19, which is monitoring the pandemic's effects in Indonesia. "Large family gatherings," she says. "Religious gatherings. Open houses. People share meals."

And now, she worries, "People go back to their hometowns, bringing the previously 'big cities' disease into small towns and villages across Indonesia."

Indonesia, with a population of 260 million, has confirmed more than 20,000 COVID-19 cases and more than 1,320 deaths, but many suspect the numbers are not a true reflection of the disease's reach.

Some gravediggers have reported working 15 hours a day, seven days a week, to dispose of bodies.

The heavy workload of gravediggers in Jakarta is highlighting a significant undercounting of deaths related to COVID-19, Connelly tells NPR. He says in March, "There were a lot more burials going on in Jakarta than there had been in any month in 2018 and 2019."

Reuters reported that the March burial figure for Jakarta was the highest since such data began being collected a decade ago, nearly one-third higher than any month in that period. "I'm struggling to find another reason than unreported COVID-19 deaths," City Governor Anies Baswedan told Reuters.

Death statistics from the provinces include the number of "patients under surveillance" or those with COVID-19 symptoms who have not been confirmed as being infected. Connelly says the central government has not included these patients in its tally and counts only deaths where COVID-19 has been confirmed through testing, which is in short supply.

Connelly says the number of deaths related to COVID-19 nationally appears to be over 5,000. On top of the official figure, "As of a week ago, there were at least an additional 3,833 who had died," he says, based on the provinces' statistics.

When asked why suspected COVID-19 cases were not included in the national death total, the Health Ministry's disease control and prevention director general, Achmad Yurianto, told the Jakarta Post, "We have the data, but we are not going to announce it to the public willy-nilly. Regional task forces also have the data. If you want complete data, ask the regions."

Widodo has acknowledged that his administration has not disclosed some data out of concern that it would "cause panic." Connelly says the generals on the president's COVID-19 task force have repeatedly advised him to withhold information because it might hurt the economy.

Widodo "is extraordinarily sensitive to the prospect of any economic damage," Connelly says, and fears that "an economic collapse might lead to the collapse of his presidency."

But Ciptadi argues that the availability of reliable data on suspected deaths is critical "for Indonesians to understand the severity of the outbreak. That this isn't just flu."