Accessibility links
Lawsuit Asks FDA To Lift Restrictions On Abortion Pill : Coronavirus Live Updates Reproductive rights advocates want patients to be allowed to pick up mifepristone at a hospital or clinic. The drug, which was approved 20 years ago, also helps to manage miscarriages for some women. 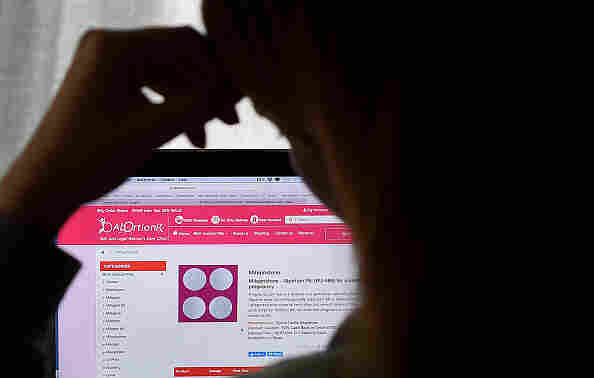 In this photo illustration, a person looks at an Abortion Pill (RU-486) for unintended pregnancy from Mifepristone displayed on a computer on May 8 in Arlington, Va. OLIVIER DOULIERY/AFP via Getty Images hide caption 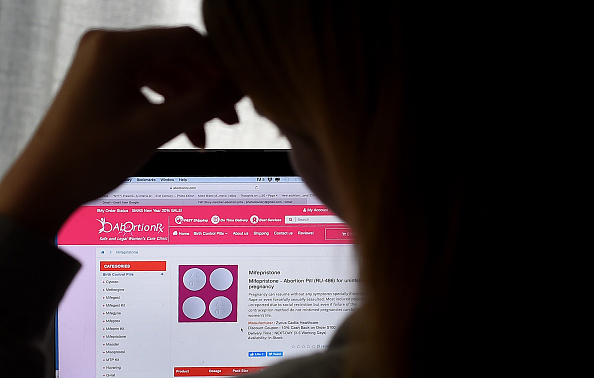 In this photo illustration, a person looks at an Abortion Pill (RU-486) for unintended pregnancy from Mifepristone displayed on a computer on May 8 in Arlington, Va.

Reproductive rights advocates are suing the Trump administration, asking a federal court to suspend restrictions on the abortion drug mifepristone during the coronavirus pandemic.

The drug mifepristone was approved by the U.S. Food and Drug Administration 20 years ago for use in medication abortions in early pregnancy. It's also used to help manage miscarriages for some women trying to avoid surgery.

In a federal lawsuit filed in Maryland on behalf of the American College of Obstetricians and Gynecologists (ACOG) and other groups, the American Civil Liberties Union requests an emergency order lifting regulations requiring patients in the United States to pick up the drug at a hospital or medical facility.

Julia Kaye, an attorney with the American Civil Liberties Union, said that requirement is putting patients at risk during the COVID-19 pandemic.

"A patient who has already been evaluated by a clinician, either through telemedicine or at a prior in person visit, still must make this entirely unnecessary trip just to pick up their prescription," Kaye said during a conference call announcing the lawsuit.

ACOG supports lifting the restrictions, called the Risk Evaluation and Mitigation Strategy or REMS, and has said they are medically unnecessary to preserve patient safety. In 2017, the ACLU filed a federal lawsuit in Hawaii, seeking to force the FDA to remove the REMS for mifepristone.

But this new lawsuit is more narrow, Kaye said, in asking the court to suspend the rules during the pandemic only. The lawsuit asks for an emergency order allowing the mifepristone to be dispensed through the mail or by pharmacies. It notes that in other areas of medicine, federal agencies "have taken substantial action ... to encourage telemedicine use" and "forego unnecessary in-person visits" during the coronavirus crisis.

Abortion rights opponents have asked the FDA to keep the regulations in place during the pandemic, arguing that women should be required to see a doctor before taking abortion pills.