Accessibility links
Couple In New York Decide To Quarantine Together After One Date : Coronavirus Live Updates New Yorkers Gali Beeri and Joshua Boliver met at a dance class in March as the city was about to lock down. The near-strangers took a leap of faith and are riding out quarantine in Joshua's apartment. 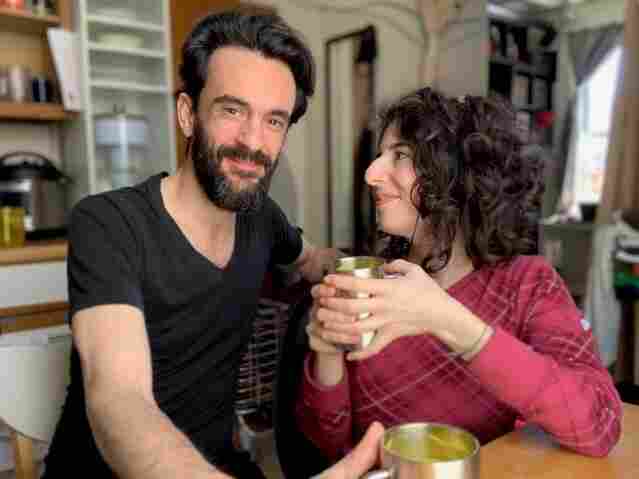 Joshua Boliver and Gali Beeri decided to quarantine together in New York City — after one date. Gali Beeri hide caption 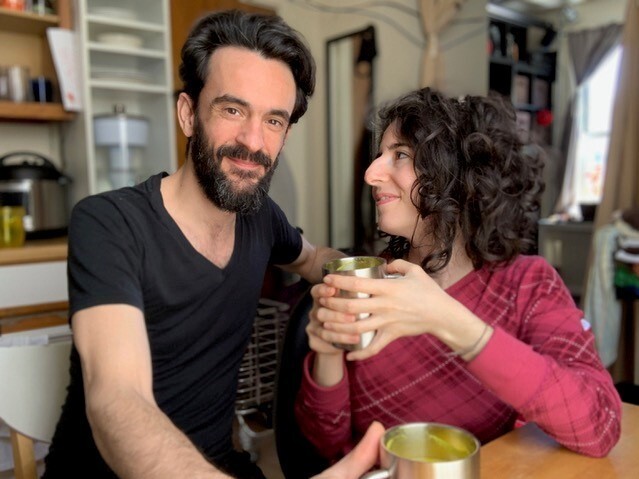 Joshua Boliver and Gali Beeri decided to quarantine together in New York City — after one date.

It has been said that disasters are relationship accelerators. They can cause a spike in marriage and babies — and they can also trigger divorce.

Most of us are hunkering down with people we already had some sort of relationship with. But a few have chosen to ride it out with practical strangers.

Gali Beeri is 37 and works as an executive assistant. Joshua Boliver is 42 and creates visual effects for movies. They both live in New York City and met at a dance class in March, as the city was preparing to lock down. At the time, they made the unlikely decision to quarantine together — after their first date.

The couple sat down to interview each other in Boliver's apartment in Astoria, Queens, which, Gali says, is now "kind of my apartment."

"Both of us thought it was the other one that suggested it," Joshua says about how they decided to quarantine together. "We just kind of stumbled into it."

They didn't really know much about each other when they started living together, and Joshua says they've had to navigate their differences as they came up. Joshua is a meat eater. Gali is a vegetarian. Joshua likes early morning. Gali is a night person.

They have met each other's parents on video chat. Gali says she remembers having fears: "Is it too soon to meet the family?" Joshua would laugh, she recalls, and say: "What's too soon? We already live together."

"The regular patterns don't really apply to us anymore," he says.

It has been such a joyful experience that Joshua says he wondered how long it could last.

"At some point, we're going to get bored or something and the honeymoon period will be over," he says.

The rough moment came, in dramatic fashion, after the couple had been quarantining together for about three weeks.

It was Gali's birthday, so they ventured to the grocery store to buy supplies for a celebratory meal. A few days later, she started feeling cold and shivering.

They took her temperature; Gali had a fever. By the next day, it had gone up to 103, then hit 104. They called the nurse hotline and were told that when a fever reaches 104, they should go to the emergency room.

"That's when I really felt the fear hit," says Gali. "I do not want to go to a hospital right now."

They were able to keep her fever down with Tylenol and avoid the ER. The experience prompted them to generate "worst case scenario" lists. Gali remembers asking herself whether she had a "do not resuscitate" order.

Gali says she trusted Joshua to make the right decisions for her, even though they had only known each other for a few weeks.

"Trusting a practical stranger with your health and well-being," Joshua laughs.

About five days into the fever, Gali had more energy.

"That night was my first shower," she reminds Joshua. "I washed my hair. It felt amazing. So I got out of the shower and you had made the bed. You put fresh sheets on the bed. I fell asleep. And that night my fever broke."

That was the first round: Gali's fever came back after a few days. Only recently has she felt her energy return to normal.

Since that time, Joshua says he finds himself wondering what will happen at the end of quarantine — and realizing that he doesn't want it to end.

"I'm curious, do you have any thoughts around it?" Joshua shyly asks Gali.

"This cocoon of time has felt like a gift," she says. "It also feels like living in a fairy tale."

Gali says that if quarantine goes on much longer, they'll have to "decide what we're doing."

"Maybe outside the constructs of this bubble that we've been in, it wouldn't work," Joshua says.

Gali is also nervous about what the future holds. "Yes, I have fear. Around walking out that door."

It's been 71 days, and Gali still hasn't been back to her own apartment.

This story was produced by Joe Richman of Radio Diaries, with Sarah Kate Kramer and Nellie Gilles. The editors were Deborah George and Ben Shapiro. We also had help from Jessica Deahl. To hear more stories from the Hunker Down Diaries series, subscribe to the Radio Diaries Podcast.