Accessibility links
FDNY Sued By Paramedics Who Spoke To Media About COVID-19 : Coronavirus Updates A group of first responders who spoke to the news media, including NPR, about their experiences during the COVID-19 outbreak are suing the city after they were suspended or restricted from work. 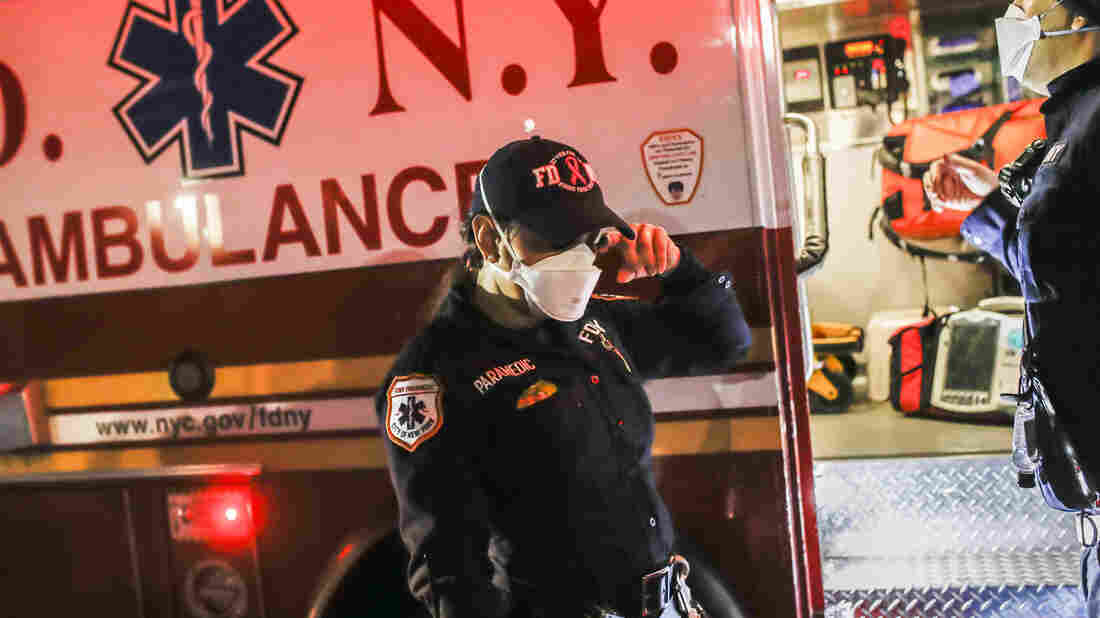 New York City Fire Department paramedic Elizabeth Bonilla (center) wears personal protective equipment after an emergency call in April in the Bronx borough of New York City. Bonilla is suing the city for allegedly retaliating against her and other EMS workers who spoke to the news media about responding to the COVID-19 pandemic. John Minchillo/AP hide caption 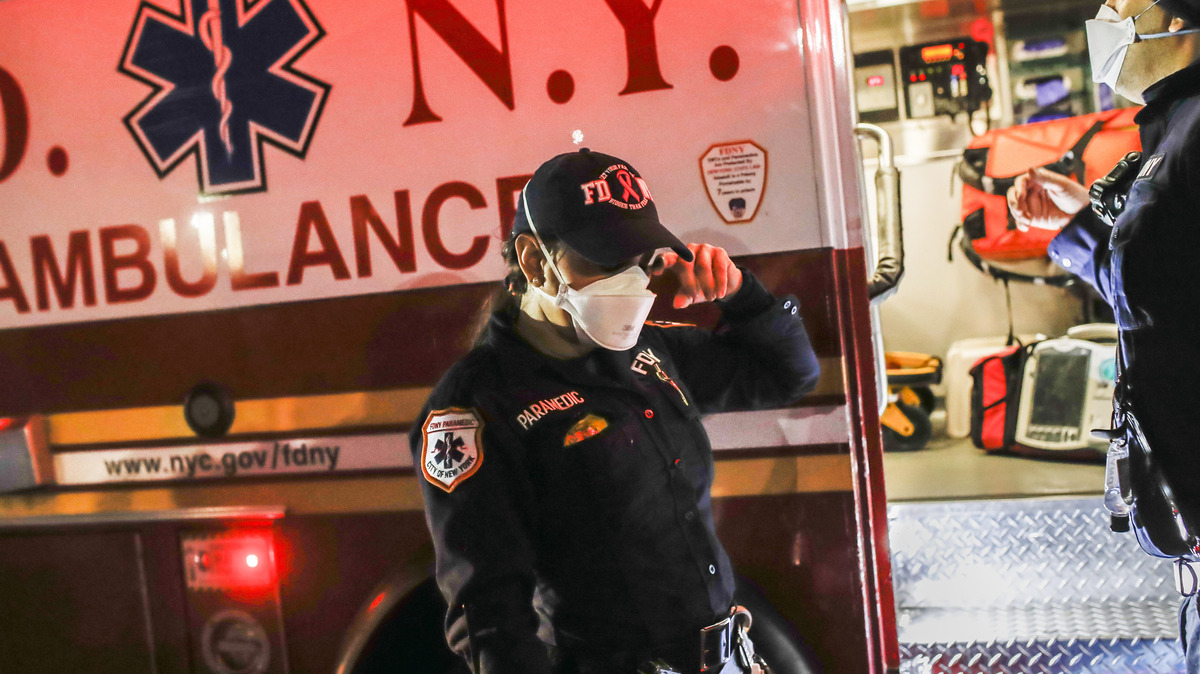 New York City Fire Department paramedic Elizabeth Bonilla (center) wears personal protective equipment after an emergency call in April in the Bronx borough of New York City. Bonilla is suing the city for allegedly retaliating against her and other EMS workers who spoke to the news media about responding to the COVID-19 pandemic.

A group of New York City emergency medical service workers who gave interviews to the news media, including NPR, are suing the city for allegedly retaliating against them after speaking about their experiences responding to the COVID-19 pandemic.

In a federal lawsuit filed Wednesday with the federal court in Manhattan, four EMS workers allege the city is violating their right to speak on issues of public concern under the First Amendment, as well as their due process rights.

In late April, the New York City Fire Department sent letters notifying three paramedics — including Elizabeth Bonilla, who spoke to NPR earlier that month — that they were restricted from treating patients, according to the complaint. Workers on restricted status are not allowed to receive overtime or work for any other emergency medical services in the city's 911 system. The letters, the complaint says, gave no reason why they were put under restrictions.

EMT John Rugen, a union officer of FDNY EMS Local 2507, was put on restricted status after the fire department first suspended him without pay for 30 days, claiming that he violated the FDNY's social media policy and patient privacy laws without providing any evidence, according to the complaint.

The fire department referred NPR's request for comment to the city's law department, which declined to answer questions about why Rugen, Bonilla and the other EMS workers who filed the lawsuit were put on restricted status and if any other workers who have spoken to the media have been restricted.

"The FDNY respects the First Amendment rights of its employees but those rights must be carefully balanced to respect the privacy rights granted under the law to patients receiving emergency medical care," Nicholas Paolucci, spokesperson for New York City's law department, said in an email.

Paolucci also declined to answer NPR's question about whether the city has received any complaints that the plaintiffs' interviews disclosed any patient's protected health information.

"We don't litigate these matters in the press," Paolucci added.

Terry Meginniss, one of the attorneys representing the EMS workers in the lawsuit, says any implication that they have not respected their patients' privacy is "absolute hogwash."

"If the fire department isn't really motivated by its interest in stopping the union from publicizing what's going on in the streets, then it would behoove the fire department to tell these individuals exactly what they think they did wrong and give them a chance to say something because these folks are the heroes of the city," Meginniss says. "These are the people who go out and treat people, and they have been living through incredibly difficult times."

All of the paramedics who filed the lawsuit are union members of Local 2507, which has been fielding interview requests from journalists during the pandemic to help promote the work of paramedics and EMTs as the union continues contract negotiations with the city.

"Every agency likes to take pride of itself. However, EMS is known to be the stepchild of the fire department," says Oren Barzilay, the president of Local 2507 who is also among the lawsuit's plaintiffs. "We always get the crumbs of the pie, so when we decided to do this campaign on our own, this is when it became a problem."