Accessibility links
Hydroxychloroquine: FDA Letter Says Likely Not Effective In Treating COVID-19 : Coronavirus Live Updates Emergency use authorization makes it easier for doctors to use a drug in a manner not specifically approved by the Food and Drug Administration. The FDA granted these drugs this status in March. 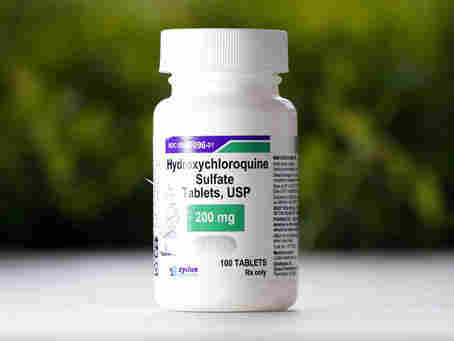 A bottle of hydroxychloroquine tablets in Texas City, Texas. The Food and Drug Administration has rescinded its emergency use authorization for the drug. David J. Phillip/AP hide caption

The U.S. Food and Drug Administration today withdrew a special status known as emergency use authorization for the drugs chloroquine and hydroxychloroquine.

President Trump was an early and vocal champion of the drugs, and even declared in May that he was taking the drugs to prevent COVID-19.

Hydroxychloroquine and chloroquine were initially designed as anti-malarial drugs and later shown to be useful in treating certain autoimmune disorders. Early on in the pandemic, some researchers thought the drugs might be useful in treating COVID-19. Laboratory tests showed hydroxychloroquine interfered with the ability of the coronavirus that causes COVID-19 to enter cells. There were also hints from the use of the drugs in patients that they might be helpful. The FDA granted the emergency use authorization in March.

But those early positive results came from small studies that did not stand up well to scientific scrutiny. Larger, more carefully designed studies failed to show a benefit.

"It is no longer reasonable to believe that oral formulations of [hydroxychloroquine] and [chloroquine] may be effective in treating COVID-19, nor is it reasonable to believe that the known and potential benefits of these products outweigh their known and potential risks," said FDA chief scientist Denise M. Hinton put it in the letter explaining the agency's decision.

The FDA decision does not affect the use of the drugs in approved clinical trials.