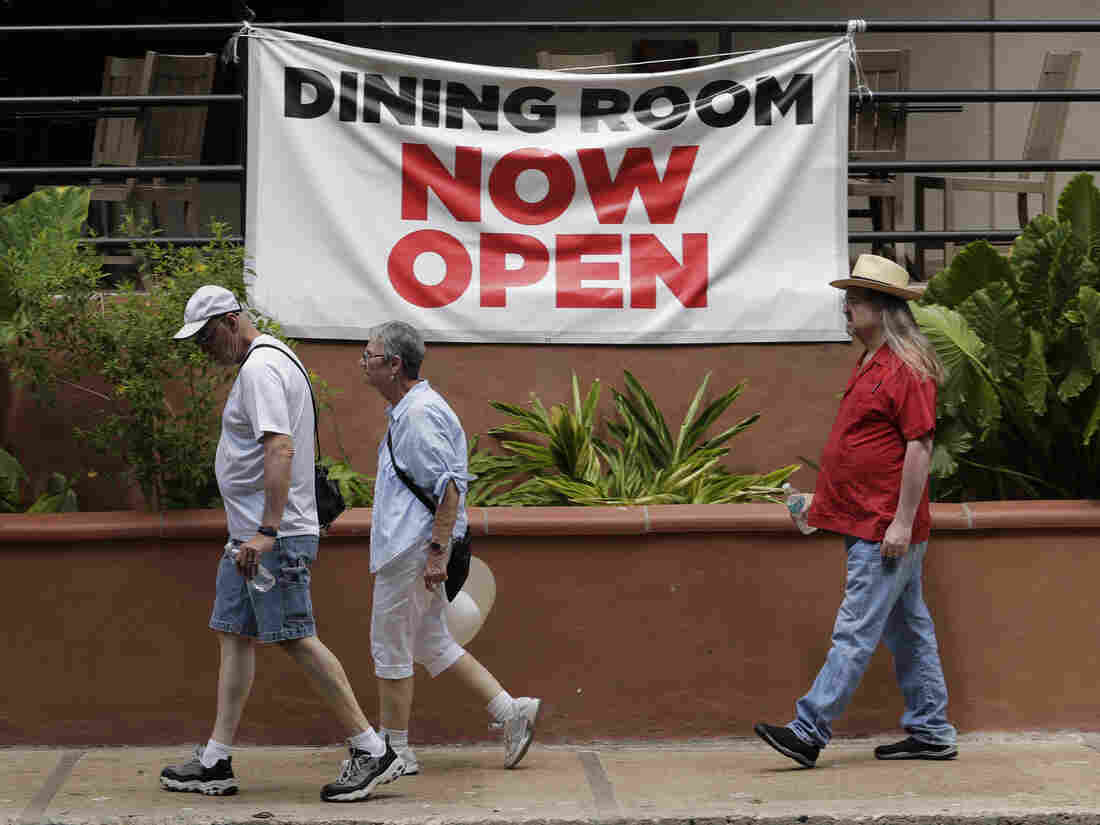 Texas has seen a recent uptick in the number of COVID-19 cases, with a record level of new cases and hospitalizations announced Tuesday. People are seen here Monday along the San Antonio River Walk. Eric Gay/AP hide caption 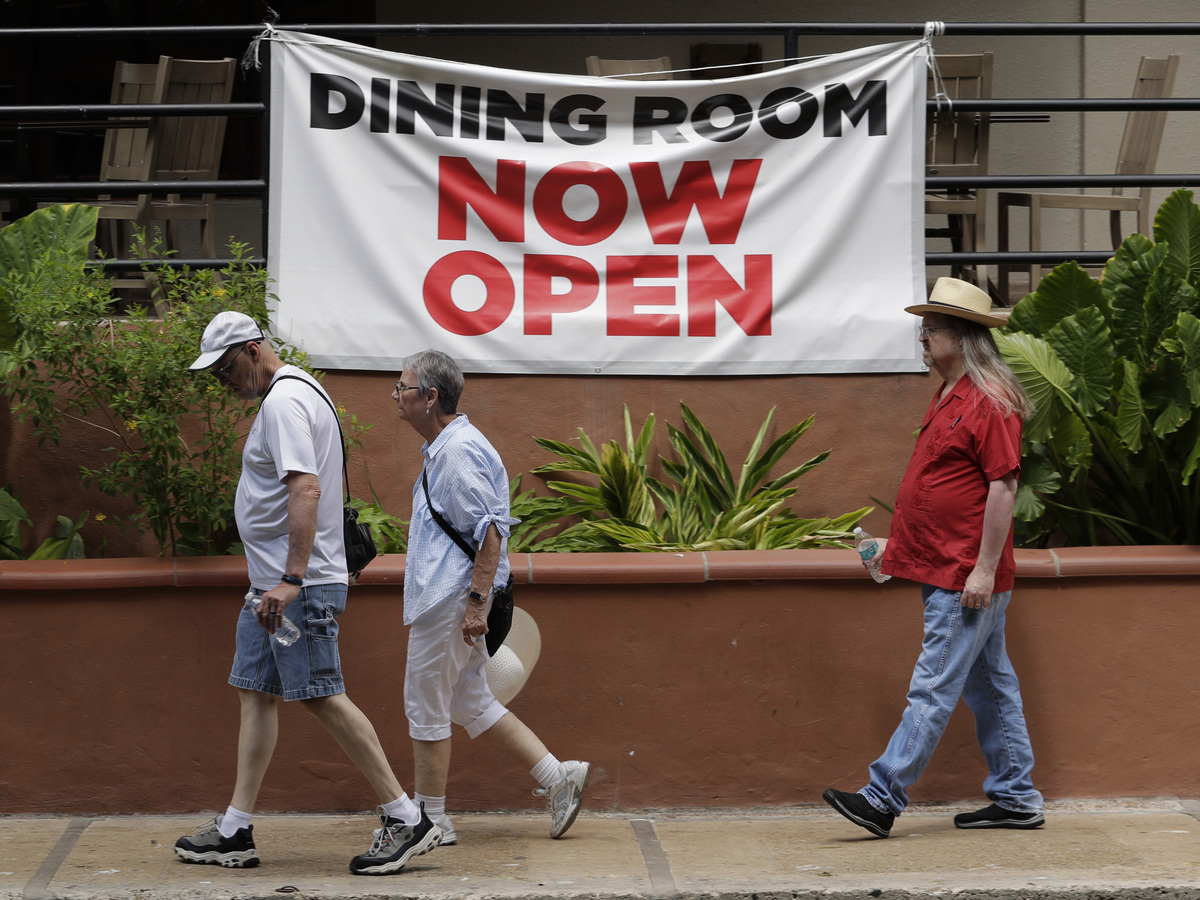 Texas has seen a recent uptick in the number of COVID-19 cases, with a record level of new cases and hospitalizations announced Tuesday. People are seen here Monday along the San Antonio River Walk.

He also reported a second record high: 2,518 people hospitalized with the virus in Texas, up from 2,326 a day earlier.

Despite the concerning uptick in people sick with the virus, Abbott said that the reason for his news conference was to let Texans know about the "abundant" hospital capacity for treating people with COVID-19. He and other officials spent much of the briefing touting the state's hospital bed availability.

Disclosing the new record high number of hospitalizations related to COVID-19, Abbott emphasized that figure is "really a very small percentage of all the beds that are available."

Texas has so far been spared the high case numbers in other populous states. While it's the second-largest state by population, Texas currently ranks sixth in terms of cumulative case numbers.

Before releasing the number of new cases, Abbott delved into what he said accounted for the previous daily high on June 10, which had 2,504 new cases. The governor said that spike could be largely attributed to 520 positive tests of inmates in Texas prisons being reported at once as well as a data error in a rural county.

Coronavirus 2nd Wave? Nope, The U.S. Is Still Stuck In The 1st One

He said there are also reasons for why Tuesday's new case count was so high: tests results coming from an assisted living facility near Plano; a county south of Austin where positive cases seemed to be reported in batches; and 104 cases in one East Texas county that appear to be primarily from tests at a prison.

But he also pointed to uncareful behavior as a possible driver in some of the new cases. Abbott said there were a number of counties where a majority of those who tested positive for the coronavirus were under the age of 30, which he attributed to people going to "bar-type" settings or Memorial Day celebrations and not taking health precautions.

Abbott said that measures such as wearing masks, hand sanitizing and social distancing are what make it possible to reopen the state's economy.

"The message is we are seeing some increase in the number of COVID patients in the state. We expected this," he said. "But we are seeing it occurring at a manageable level. I really want to stress that the continued success is up to the people of the state of Texas."

Despite Abbott's emphasis on the importance of masks, he has barred Texas cities from implementing any rules that would require face coverings.

Abbott signed an executive order on April 27 that says while individuals are encouraged to wear face masks, "no jurisdiction can impose a civil or criminal penalty for failure to wear a face covering."

On Tuesday, the mayors of nine Texas cities — including Houston, Dallas, San Antonio, Austin, Fort Worth and El Paso — sent a letter to the governor asking for the authority to set the rules and regulations on the use of face coverings.

"A one-size-fits-all approach is not the best option. We should trust local officials to make informed choices about health policy. And if mayors are given the opportunity to require face coverings, we believe our cities will be ready to help reduce the spread of this disease," they wrote. "If you do not have plans to mandate face coverings statewide, we ask that you restore the ability for local authorities to enforce the wearing of face coverings in public venues where physical distancing cannot be practiced."

Abbott said Tuesday that judges and local officials have other tools available for enforcement such as issuing fines for gatherings that don't follow state protocols.

Austin Mayor Steve Adler extended a stay-at-home warning on Monday amid the news of rising cases – but that warning could only be advice to residents and not an order due to the state's preemption.

"People are confused," Adler told NPR's Steve Inskeep on Tuesday. "They just don't know at this point if it's really important to wear face coverings or not, because I think they're feeling like they're getting mixed messaging — not only from state leadership but from national leadership. So we're just not getting the vigilance that we need on these efforts."

Surges In COVID-19 Cases Cause Friction Between Local Leaders, Governors

Surges In COVID-19 Cases Cause Friction Between Local Leaders, Governors

In Austin, Adler said, you'll see most everyone wearing a mask in grocery stores but not in restaurants or music clubs: "When we started opening up the economy and when the governor took away from cities the ability to make it mandatory, more and more people stopped wearing them."

Adler said he agreed with Abbott that face coverings are key to reopening parts of the economy, even if they're unpleasant for wearers.

"I know it's inconvenient. I know it's hot. I know it's a nuisance," Adler said. "And it's hard to do, and people don't like it. But at the same time, our community has to decide just how much we value the lives of folks in our community that are over 65 and older. We have to decide how much we value the lives of the communities of color that are suffering disproportionately because of this virus."