Accessibility links
Florida Officials Spar Over Rising COVID-19 Cases : Coronavirus Live Updates As Florida's COVID-19 numbers continue to break records, the state's top officials are sparring over what to do to try to stem the increases. 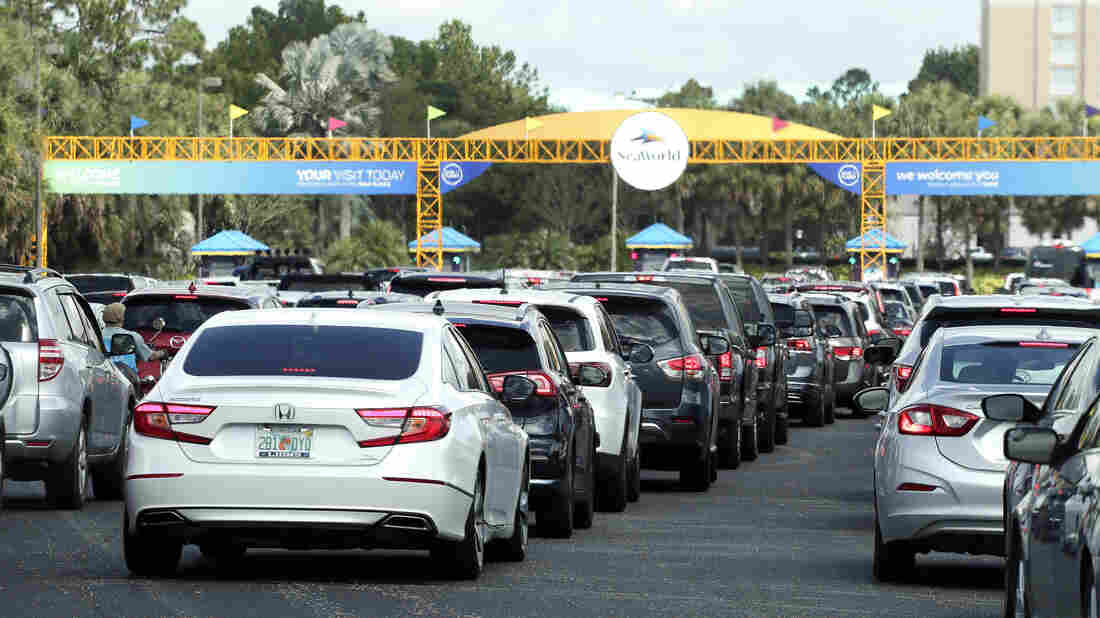 Cars line up to enter SeaWorld as it reopens, on June 11, in Orlando, Fla. The park had been closed since mid-March to stop the spread of the coronavirus. John Raoux/AP hide caption 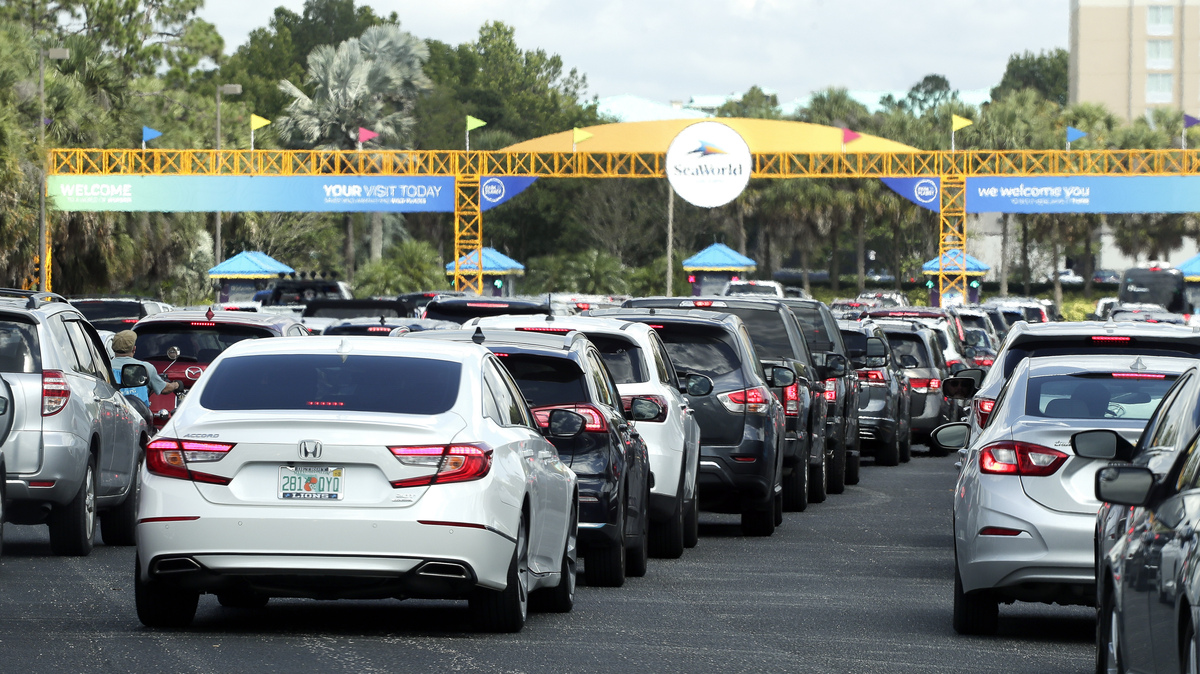 Cars line up to enter SeaWorld as it reopens, on June 11, in Orlando, Fla. The park had been closed since mid-March to stop the spread of the coronavirus.

In Florida, where there's a surge of new COVID-19 cases, officials are divided over what to do about it. The state saw 2,783 new cases Tuesday. It was the third time in the past seven days that Florida set a new daily record.

Florida Gov. Ron DeSantis and other Republican officials, including President Trump, say the rising number of new cases was expected and is mostly the result of increased testing. Florida is now testing more than 200,000 people a week, more than double the number tested weekly in mid-May.

But local officials and public health experts are concerned about other statistics that show that the coronavirus is still spreading in Florida. The state's Department of Health reports that the number of people showing up in hospital emergency rooms with symptoms of the flu and COVID-19 is rising. Also worrisome — the percentage of people who are testing positive for the virus is going up.

Florida's Rising COVID-19 Numbers: What Do They Mean?

In Palm Beach County, health director Alina Alonso says the rising positivity rate is a clear sign that the new cases can't just be attributed to increased testing. Since Palm Beach County began allowing businesses to reopen, Alonso says, the percentage of people testing positive has jumped from 4.9% to 8.9%. "The fact that these are going up means there's more community spread," she says. "The virus now has food out there. It has people that are out there without masks, without maintaining distancing. So it's infecting more people."

Alonso say the number of people hospitalized for the coronavirus has also gone up in Palm Beach County. "The numbers are very concerning to the hospitals," she says. So far, the number of deaths from COVID-19 has remained low. But Alonso says deaths lag behind new recorded cases by about six weeks. She thinks the number of deaths will also rise. "We need to be cautious at this time. Wait a little bit until we see whether or not that happens," she says. "If we go forward without waiting to see what is going on ... by the time we get those deaths, it will be too late."

In Tallahassee, DeSantis held a news conference where he responded to concerns about the rising positivity rate. Much of it, he said, is related to outbreaks among farmworkers and people in prison. Among the incidents he highlighted — a watermelon farm near Gainesville where, out of 100 workers tested, 90 were positive. DeSantis said, "When you have 90 out of 100 test positive, what that does to positivity — that's huge numbers." Some of the other localized outbreaks among farmworkers, he noted, were in Palm Beach County.

DeSantis said there's no reason to consider rolling back the rules allowing businesses to reopen at the moment. He has encouraged the resumption of sports events and attended a NASCAR race in Homestead, Fla., on Sunday with a few hundred other spectators. And he successfully lobbied for Florida to host President Trump's acceptance speech at a Republican National Convention event in Jacksonville. That gathering is expected to draw thousands.

Democrats have become increasingly critical, saying DeSantis is ignoring important data that favor a more cautious response. Florida's top elected Democrat, Agriculture Commissioner Nikki Fried, said, "Refusing to acknowledge the alarming patterns in cases, hospitalizations and positivity is not only arrogant but will cost lives, public health and our economy."