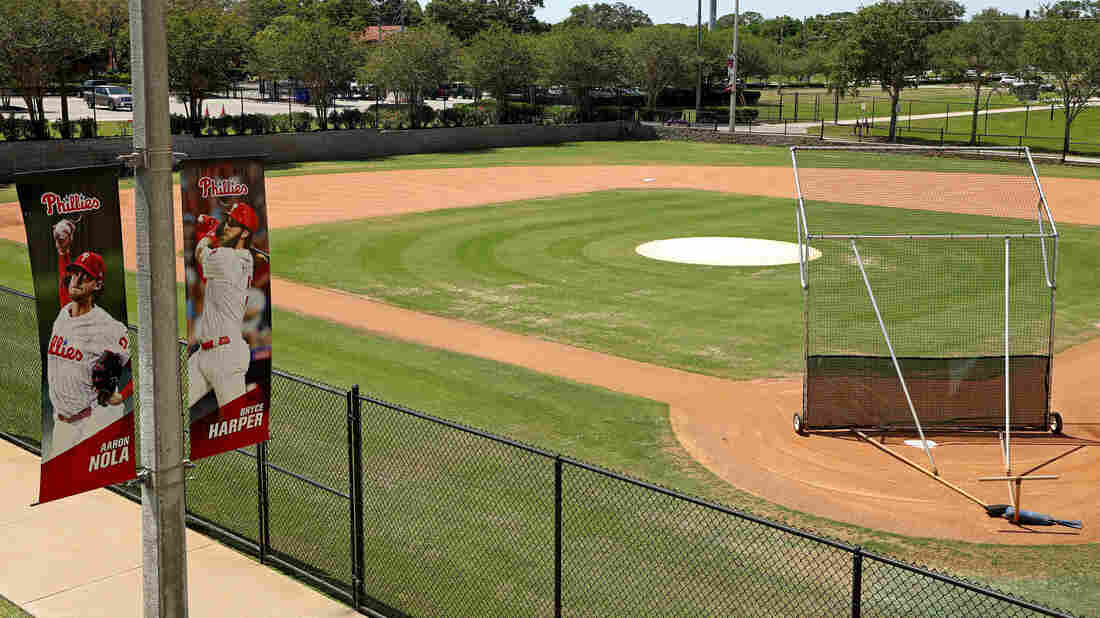 A view of the spring training home of the Philadelphia Phillies on May 20, 2020 in Clearwater, Fla. The Phillies closed the complex after several players tested positive for COVID-19. Mike Ehrmann/Getty Images hide caption 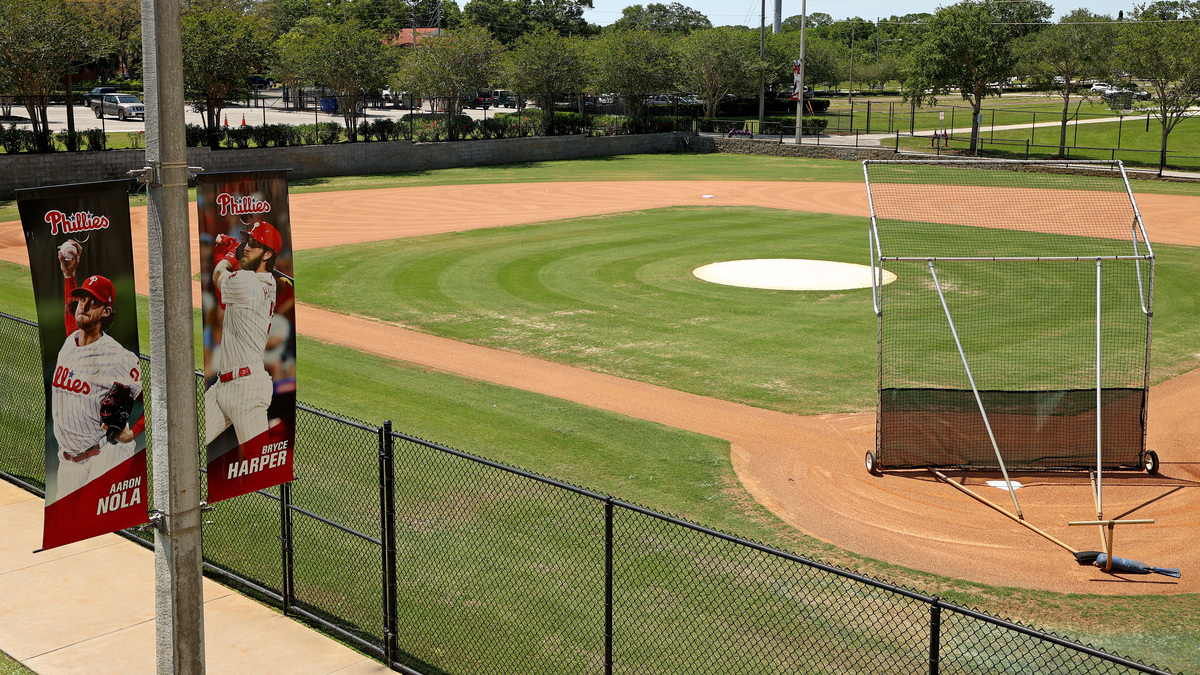 A view of the spring training home of the Philadelphia Phillies on May 20, 2020 in Clearwater, Fla. The Phillies closed the complex after several players tested positive for COVID-19.

Major League Baseball will shut down and disinfect all 30 teams' Spring Training facilities in Florida and Arizona, as the coronavirus continues to make its presence felt.

The league says players and other personnel will need a negative test for the virus before they can get back into the facilities after the deep cleaning.

Before the announcement late Friday night, several teams made the decision on their own to shut down.

In a statement, the Phillies confirmed five players and three staff members working at the facility contracted the coronavirus.

"The first confirmed case occurred this past Tuesday, June 16," the statement said, adding "in addition, eight staff members have tested negative for the virus, while 12 staff members and 20 players (both major league and minor league players) living in the Clearwater area are in the process of being tested and are awaiting the results of those tests."

"The Phillies are committed to the health and welfare of our players, coaches and staff as our highest priority," the team's managing partner John Middleton said in a statement, "and as a result of these confirmed tests, all facilities in Clearwater have been closed indefinitely to all players, coaches and staff and will remain closed until medical authorities are confident that the virus is under control and our facilities are disinfected."

After the Phillies made their announcement, the Toronto Blue Jays confirmed they shut down their facilities in Dunedin – a short drive from Clearwater on Florida's Gulf Coast. According to a club spokesman, both the major league training camp and minor league facility have been closed.

"The Toronto Blue Jays confirm that personnel at the club's Spring Training facilities in Dunedin, FL. have undergone testing for COVID-19, after a player presented symptoms consistent with those of the virus," the team said in a statement. "As a result, the Blue Jays have suspended operations at their Dunedin facilities for the time being."

According to ESPN baseball insider Jeff Passan, the shutdowns happened after a Toronto pitcher showed symptoms of COVID-19. He'd reportedly spent time with players in the Phillies minor league system.

The NHL already has announced its plan for restarting the season after its March shutdown. Baseball is still trying to hammer out its plan – now potentially complicated by these shutdowns, plus reports earlier this week that several other Major League players and coaches had tested positive. Their names and team affiliations weren't disclosed.

It's a critical moment for the sport. Players and owners have been locked in acrimonious negotiations about money as MLB tries to restart after its March shutdown due to the pandemic. There's hope that if a resolution to financial and other issues happens quickly, an abbreviated spring training could start as soon as next week with a hoped-for start to the regular season in mid-July.

It's not certain what impact, if any, the news on positive tests and facility closures might have on spring training or overall negotiations.

Time is getting tight for a season start. Owners want the regular season over by September 27, to avoid a possible coronavirus surge in the fall that could wipe out the playoffs.

This week, a prominent health care official said Major League Baseball should be on an even shorter timeline.

Dr. Anthony Fauci, director of the National Institute of Allergy and Infectious Diseases, said the majors should finish the postseason in September.

"If the question is time, I would try to keep it in the core summer months and end it not with the way we play the World Series, until the end of October when it's cold," Fauci told the L.A. Times.

"Even in warm weather, like in Arizona and California, we're starting to see resurgences as we open up," Fauci said. "But I think the chances of there being less of an issue in the end of July and all of August and September, are much, much better than if you go into October."

While the pressure mounts on baseball, Florida's surge in coronavirus cases could have an impact on other leagues as well. The NBA and Major League Soccer both have plans to reopen in the Orlando area next month.