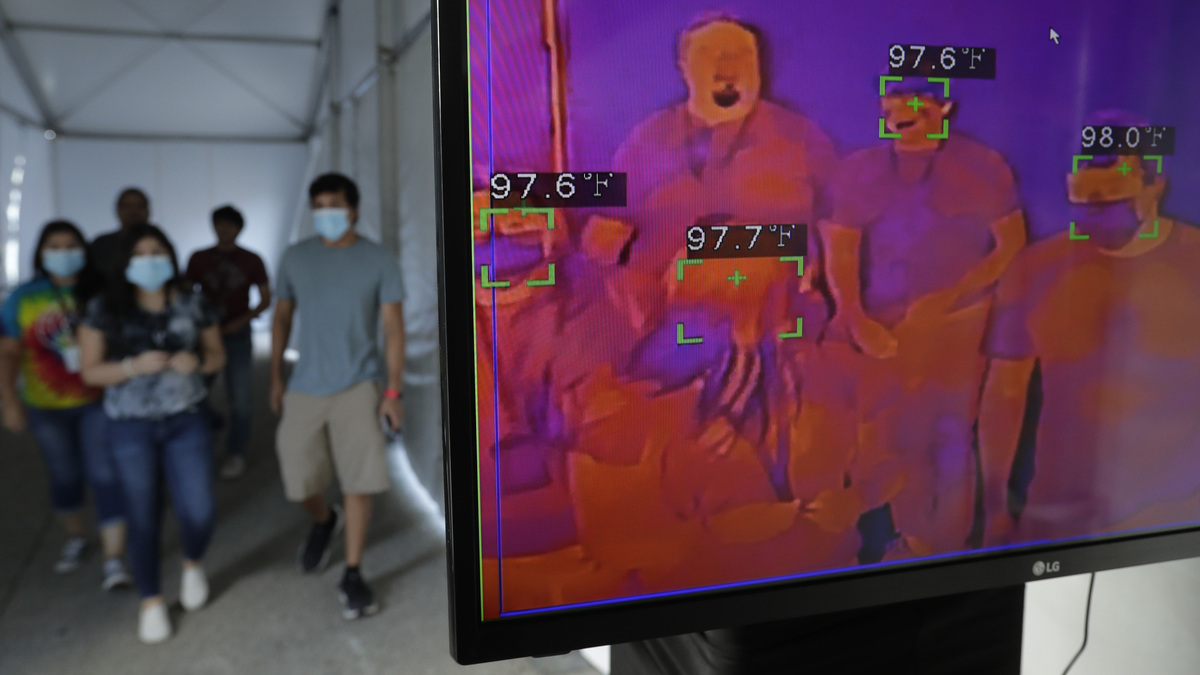 "Today, Texas will report an all-time high in the number of cases of people testing positive" for the coronavirus, Gov. Greg Abbott said Tuesday, adding that for the first time, his state would surpass 5,000 new cases in a single day.

Abbott initially revealed the daunting new record during an interview with TV station KBTX in which he urged people to take the deadly disease seriously, telling them to wear a mask in public, stay home when possible and take other precautions.

"The hospitalization rate is at an all-time high," he said. "The coronavirus is serious. It's spreading in Brazos County, across the entire state of Texas."

Texas is seeing a sharp rise in cases; it was just days ago that the state crossed the 4,000-case mark for the first time in its daily tally.

New cases have hit the Houston area so hard that the Texas Children's Hospital is now admitting adult patients. The move comes despite the fact that Houston is home to the massive Texas Medical Center — deemed the largest medical center in the world.

"Texas Children's is committed to providing additional capacity through ICU and acute care beds across our hospital campuses to take on both pediatric and adult patients," the hospital said in a statement to NPR.

The adult patients include people have COVID-19 and other cases. Those diagnosed with the coronavirus are being cared for in an expanded special isolation unit, according to Texas Children's Hospital.

Texas has steadily boosted its capacity to test for the coronavirus that causes COVID-19, but experts said that's not enough to explain the flood of new cases.

"Probably the greater factor that's pushing our numbers up is that the positivity rate is now gone from around 3% to around 9% — that's a threefold increase," said Dr. David Persse, public health authority for the Houston Health Department, according to Houston Public Media.

Texas is facing "a steep terrifying rise" in COVID-19 hospitalizations and intensive care unit admissions at the Texas Medical Center, said Dr. Peter Hotez, dean of the National School of Tropical Medicine at Baylor College of Medicine, in a tweet about the current situation.

The dramatic new numbers do not represent a second wave in Texas, which was among the first states to start the reopening process. The state health department's graph of daily new cases shows a steady rise since the COVID-19 pandemic began to take hold in March. The curve began to arc even higher earlier this month, continuing with Tuesday's spike.

The number of new coronavirus cases has risen briskly in Texas during June, sharpening an overall rise since cases crossed the 1,000-patient mark in March. The state now has 120,370 cases. Texas Department of State Health Services/Screenshot by NPR hide caption

The number of new coronavirus cases has risen briskly in Texas during June, sharpening an overall rise since cases crossed the 1,000-patient mark in March. The state now has 120,370 cases.

Abbott has urged people to observe social and physical restrictions to curb the coronavirus. He recently called the idea of shutting down the Texas economy again "the last option" to fight COVID-19. But on Tuesday, he also said agencies will clamp down on bars that have allowed overcrowding since restrictions began to lift.

And the governor hinted at the possibility of new limits, referring to "additional announcements that may be coming later today" or sometime this week.

"COVID-19 is now spreading at an unacceptable rate in the state of Texas, and it must be corralled," Abbott said Monday.

Calling on people to follow safety rules about washing their hands, social distancing and wearing face coverings, he added, "Texans have shown that we don't have to choose between jobs and health — we can have both. We can protect lives while also restoring livelihoods."