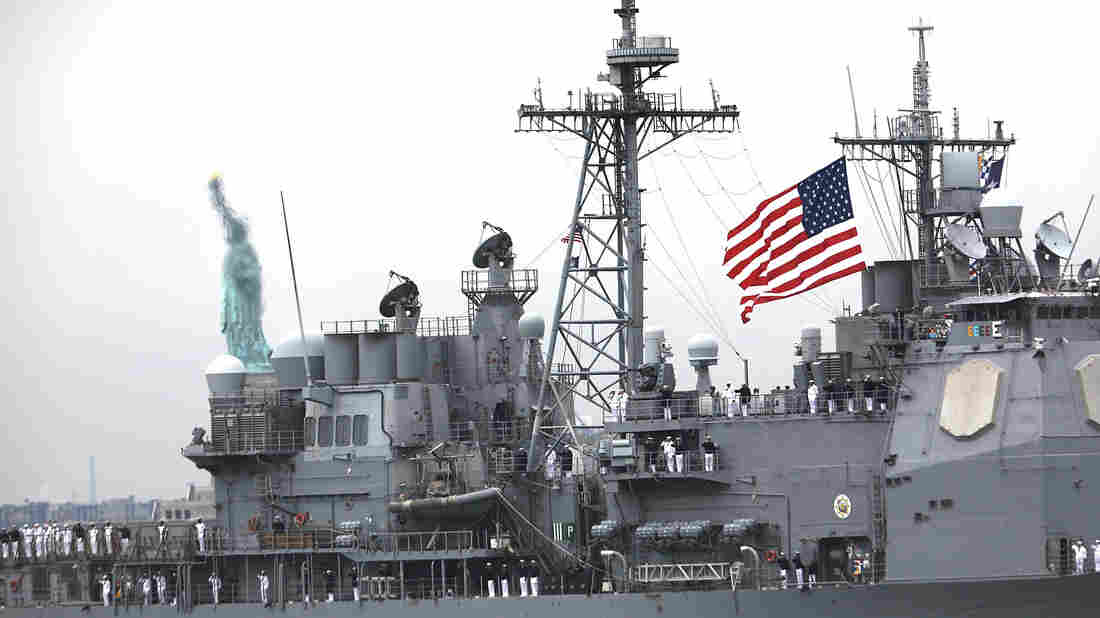 The USS San Jacinto passes by the Statue of Liberty in May of 2017. On Thursday, guided-missile cruiser was one of two Navy vessels that broke a record for consecutive days at sea. Spencer Platt/Getty Images hide caption 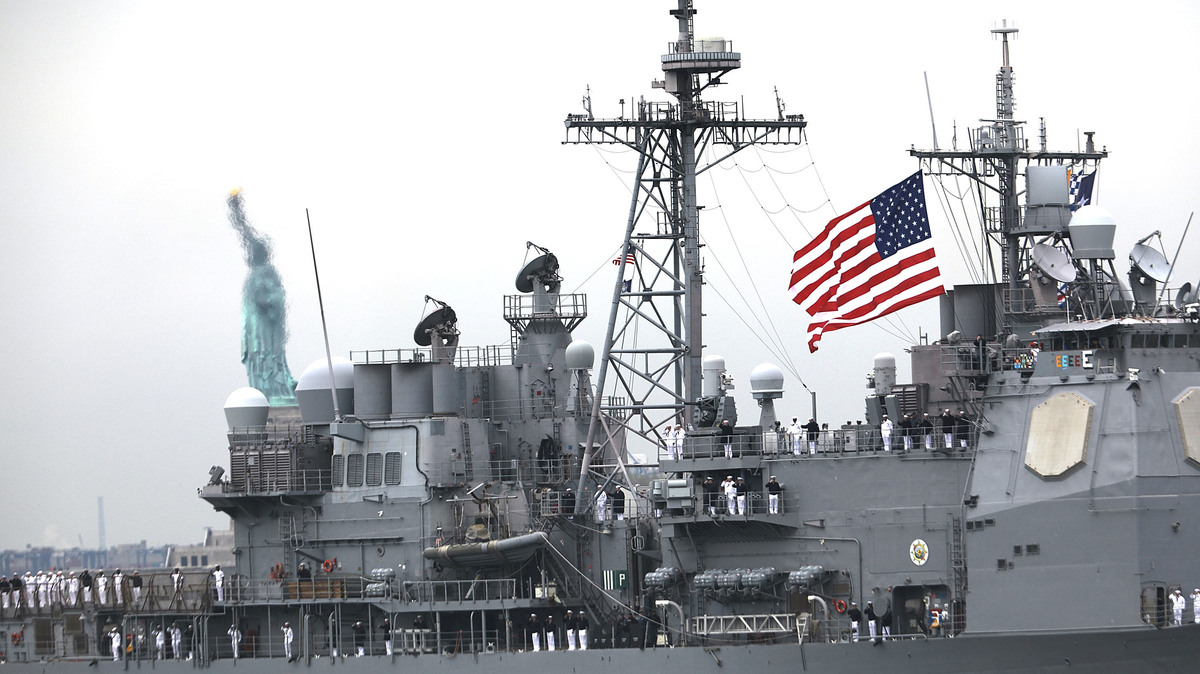 The USS San Jacinto passes by the Statue of Liberty in May of 2017. On Thursday, guided-missile cruiser was one of two Navy vessels that broke a record for consecutive days at sea.

Thanks to their efforts to steer clear of the worldwide coronavirus pandemic, the U.S. Navy says two American warships that set sail in mid-January broke the modern record on Thursday for consecutive days at sea for U.S. naval surface vessels.

This was hardly in their original mission plan. When the nuclear-powered aircraft carrier USS Dwight D. Eisenhower and the guided-missile cruiser USS San Jacinto left their home port in Norfolk, Va., 161 days earlier, the COVID-19 disease caused by the coronavirus had not yet even been named.

As they steamed toward the waters off the Middle East, far weightier on the minds of the battleships' sailors than a deadly virus was a strike by Iran on an Iraqi military base a week earlier and the prospect of further conflict in the Persian Gulf region.

The previous at-sea record of 160 days had been set by the USS Theodore Roosevelt, another U.S. aircraft carrier, in the months following the Sept. 11 attacks.

That vessel was forced to dock in Guam in late March by a COVID-19 on-board outbreak that led to the removal of its skipper and the infection of more than 1,000 crew members after a port call in Vietnam.

As the pandemic spread and the Eisenhower and the battleships escorting it sailed past Mediterranean ports without stopping, eschewing port calls became the official policy of the carrier group.

"In March, I suspended liberty port visits to reduce the chance of spreading and contracting the virus across the Fleet," Vice Adm. James Malloy, commander of the U.S. 5th Fleet, says in a Navy publication highlighting the new record. "Throughout this pandemic, maintaining the Fleet's warfighting readiness while ensuring the safety and well-being of our Sailors has been my top priority."

Despite the occasional "steel beach picnics" and barbecues on the carrier's landing deck meant to ease the non-stop seafaring, the 23 weeks the two record-setting ships have been underway have proven to be a morale-challenging marathon.

"It's a bittersweet feeling," Bill Goldberg, a naval air crewman aboard the Eisenhower, tells NPR of the record-shattering voyage he's been a part of. "We'll be in the Navy record book, but for something I'd never want to do again."

"The hardest part, by far," Goldberg adds, "is being away from friends and family in what has really seemed a tumultuous time in America."

The carrier's commanding officer had only praise for his long-sailing crew.

"Our ships remain undeterred in the face of adversity and this monumental feat will only make our crews and the Navy stronger," Capt. Kyle Higgins is quoted as telling the carrier group's public affairs office. "I'm so proud of the young men and women I see on the deck plates each and every day. Their dedication to the mission is what makes our Navy the greatest fighting force the world has ever seen."

It's not clear how much longer the record-setting warships will remain at sea.

"The fact of the matter is our work isn't done," Capt. Edward Crossman, the San Jacinto's commanding officer, tells the Navy's news service. "We aren't headed home yet, and we're on path to blow the previous record out of the water."

Due to flight operations scheduled for Thursday, a celebration of the two ships' surpassing the previous record is due to take place Saturday, which will be their 163rd day at sea.

Higgins, the Eisenhower's commanding officer, tells the Associated Press he's ordered a surf and turf dinner for the crew to be followed by "a big cake and ice cream."

And there will be yet another record set, but only for one of the two warships — the last one that cruises into Norfolk.