Accessibility links
In Arizona, Nearly 1 In 4 Coronavirus Tests Now Comes Back Positive : Coronavirus Live Updates The percentage of positive tests in Arizona is more than three times the national average, and hospital capacity has become a concern. 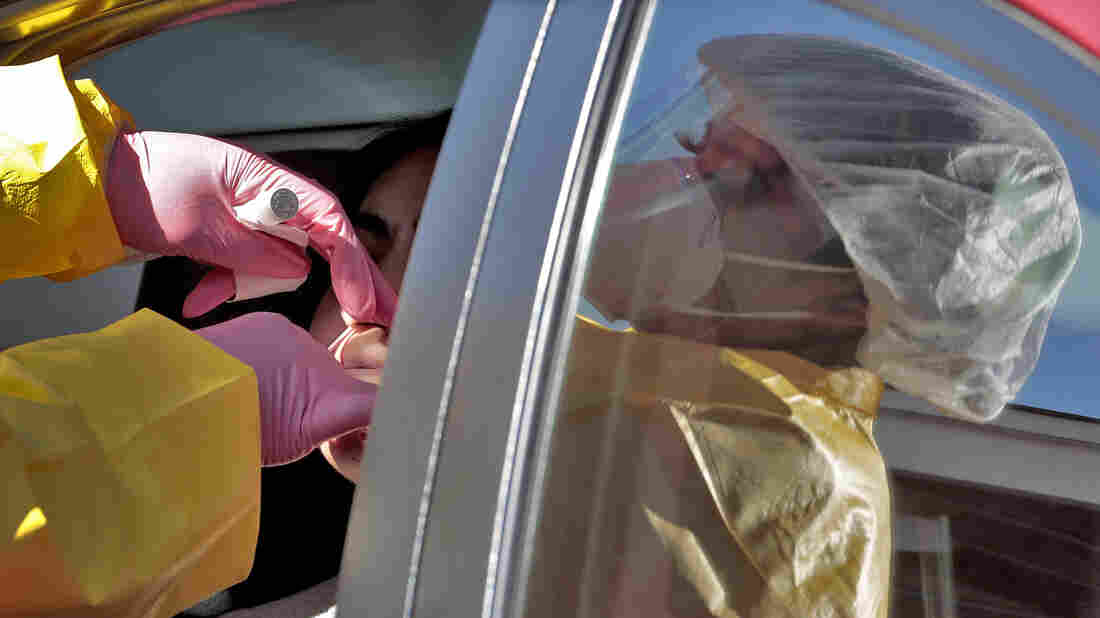 People get tested for the coronavirus at a drive-through site in Phoenix last month. In Arizona, the portion of tests coming back positive now hovers around 24%, more than three times the national average. Matt York/AP hide caption 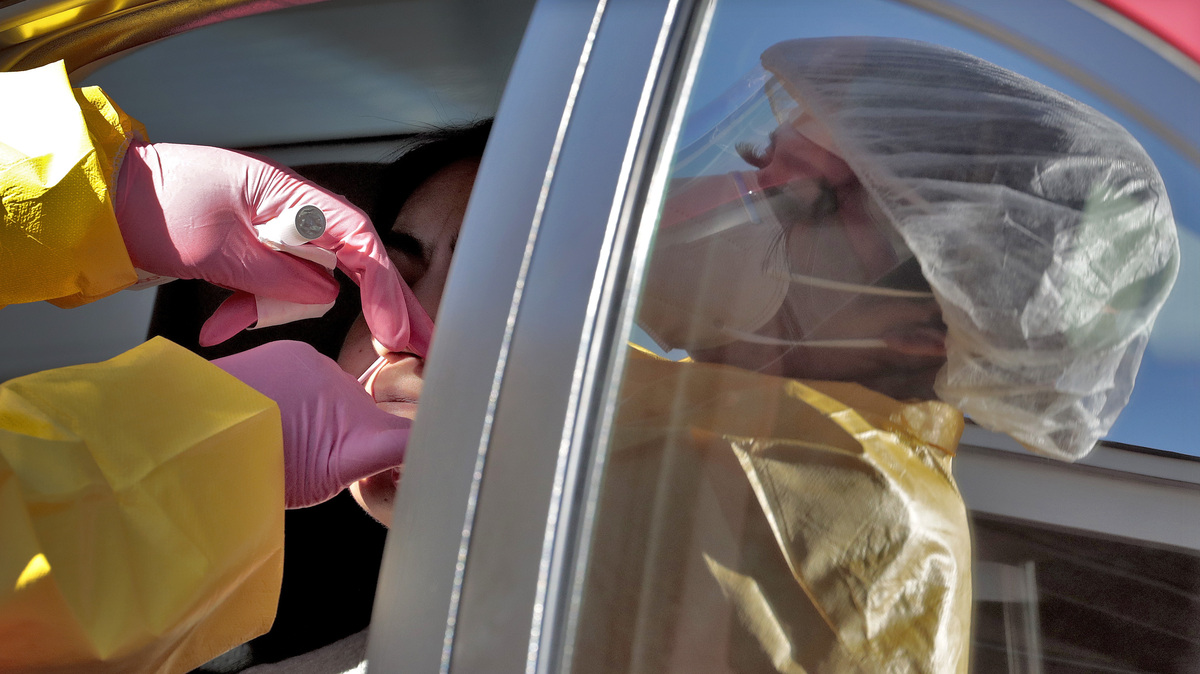 People get tested for the coronavirus at a drive-through site in Phoenix last month. In Arizona, the portion of tests coming back positive now hovers around 24%, more than three times the national average.

Arizona is contending with one of the worst outbreaks of any state as coronavirus cases surge again across the United States. Hospitals are bracing for a wave of seriously ill patients, and health officials are pleading with the public to wear masks and heed guidance about social distancing — even in the absence of a second stay-at-home order.

Arizona was quick to relax restrictions on businesses and reopen its economy, beginning in early May. Most new cases have come in just the past month. Maricopa County, with its Phoenix metro area, now ranks as one of the top five U.S. counties for total cases.

"Our foot is still on the accelerator, conditions are deteriorating and they're going to continue to deteriorate at least for the next two to three weeks," said Dr. Joe Gerald, a professor of public health at the University of Arizona who runs modeling on the coronavirus outbreak.

Gerald says the state is essentially doubling the number of cases every two weeks. Over the past week, it has averaged about 3,500 new cases a day. On Wednesday, Arizona hit a new record, with more than 4,800 positive cases. More than 1,700 people have died.

"You don't have to play that out very long to realize we're soon going to be in considerable trouble as our safety margin for excess hospital beds is fairly quickly dwindling," he said.

Based on current trends, Gerald said, the state might run out of licensed beds toward the end of July, but that forecast doesn't take into account whether there will be enough personnel to care for patients, even before then.

Of particular concern is that new cases continue to outpace testing capacity.

In Arizona, the portion of tests coming back positive hovers around 24%, more than three times the national average. Texas and Florida, where cases are also rising rapidly, have positivity rates of 14% and 16%, respectively.

"There's a huge reservoir of individuals who are infected and have the ability to transmit that infection," Gerald said.

Younger adults are driving much of Arizona's outbreak, with many cases popping up among people in their 20s and 30s, an age group that is more likely to show mild symptoms or be asymptomatic.

That makes tracking cases even more difficult, but Gerald says it may also save Arizona's hospitals from being as overwhelmed as those in a place like New York City.

"If there's any saving grace ... it's that new cases are heavily concentrated in those best able to survive the infection," he said.

Still, the state is far from having the virus under control.

This week, Arizona Gov. Doug Ducey closed down bars, gyms and theaters. State health officials also told hospitals that they could activate their crisis standards of care plan — guidelines on how to triage patients and allocate scarce resources during an emergency.

Not every hospital needs to do that yet, though. Arizona's intensive care unit beds are currently at about 90% of capacity, according to state data.

"There is a significant concern regarding resource availability, staff availability and just everything being overrun at some point," said Dr. Ross Goldberg, president of the Arizona Medical Association.

The state's largest hospital system, Banner Health, is trying to free up space for COVID-19 patients by repurposing pediatric beds and doubling up rooms. It's also bringing in hundreds of out-of-state health workers.

"We have the space. We have the plans to surge. We have supplies. But our health care workers are strained. And we need to call in reinforcements," Alameddin said.

Arizona has asked the federal government for 500 front-line health care workers to support the hospital system. On Wednesday, Vice President Pence visited Arizona and said the state would get any help it needs to handle the surge of patients.

Both Pence and Ducey wore masks during the visit, something they had been reluctant to do earlier in the pandemic.