Accessibility links
In Miami, Rolling Back Openings To Contain The Coronavirus Surge : Coronavirus Live Updates In Miami, local officials have ordered a rollback of some reopening measures because of the region's soaring coronavirus cases. Gyms have to close and in-person dining at restaurants is prohibited. 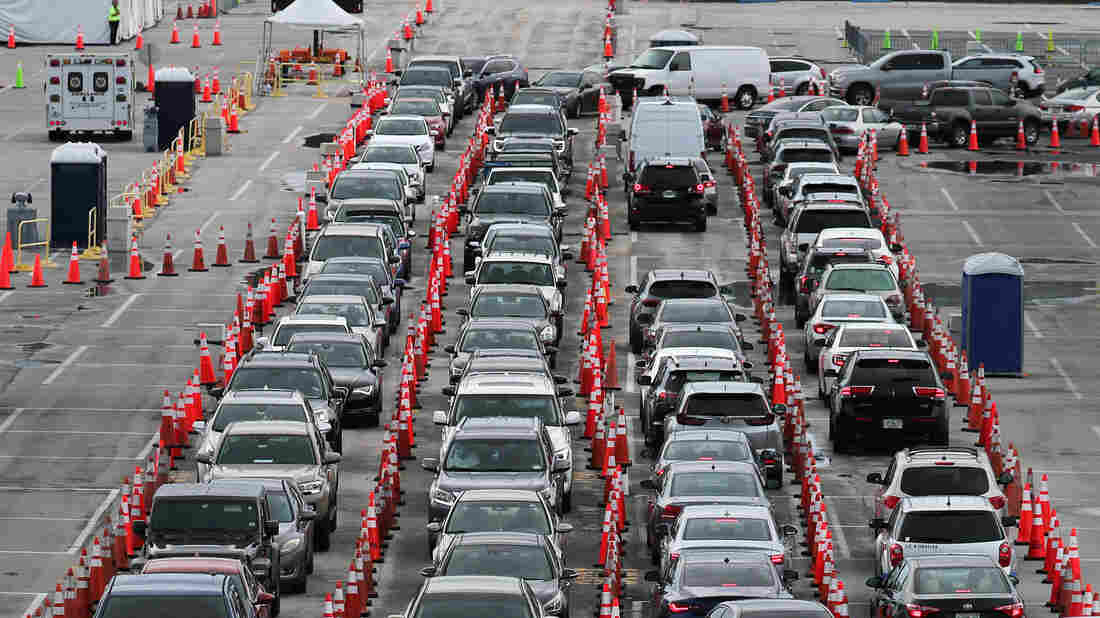 Lines and lines of cars are seen as drivers wait on Monday to be tested for COVID-19 at a coronavirus testing site in Miami Gardens, Fla. Joe Raedle/Getty Images hide caption 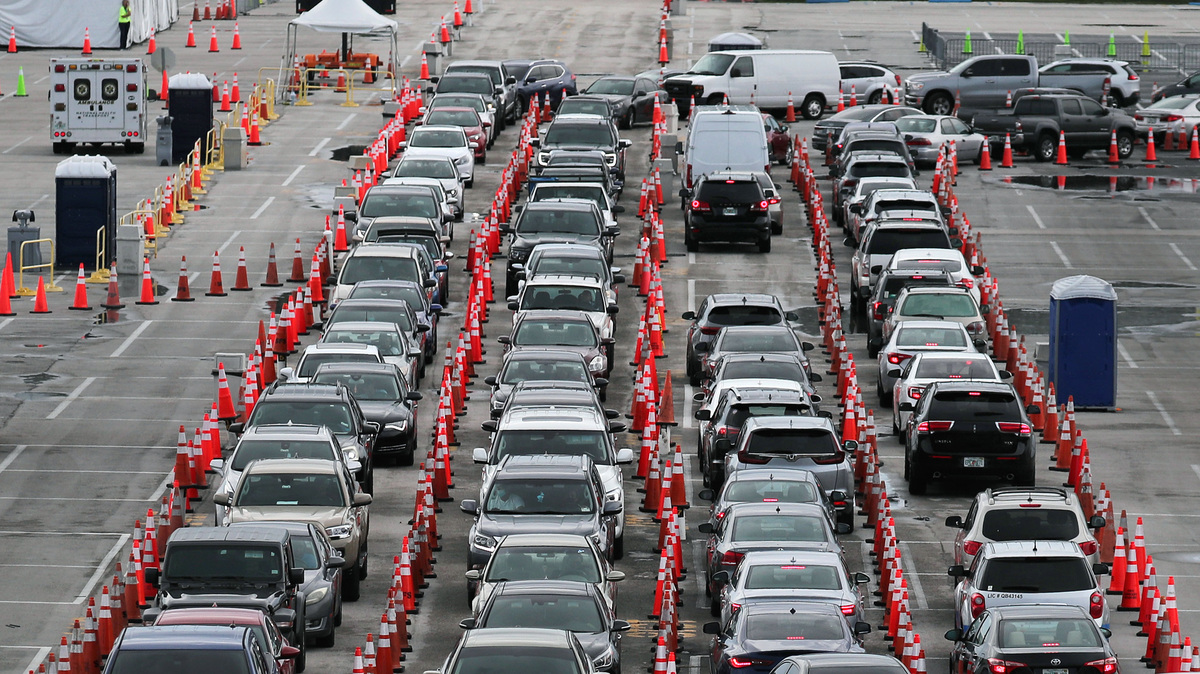 Lines and lines of cars are seen as drivers wait on Monday to be tested for COVID-19 at a coronavirus testing site in Miami Gardens, Fla.

The mayor of Miami-Dade County has ordered a rollback of some reopening measures as Florida continues to see a surge in COVID-19 cases. Florida's Department of Health reported 6,336 new cases Monday, bringing the total to 206,447 people who have tested positive for the coronavirus.

While the number of new cases is lower than that seen over the weekend, fewer tests were also completed. On Saturday, Florida set a new record with 11,458 positive cases out of more than 85,000 people tested. Monday's results show just over 46,000 people tested. But, the percentage of people testing positive for the virus remains about the same as the past week, near 15%.

In response, Miami-Dade Mayor Carlos Gimenez announced a new emergency order Monday closing restaurants to all except takeout and delivery, although he later amended the plan to allow outdoor dining. The order also closes gyms, fitness centers, party venues and short-term rentals. The action comes less than three weeks after restaurants were allowed to resume serving customers on the premises with safety precautions in place.

In a statement, Gimenez said he was issuing the order because the county was seeing an increase in hospitalizations for COVID-19. He said, "We want to ensure that our hospitals continue to have the staffing necessary to save lives."

It follows emergency orders issued in Miami-Dade County last week that imposed a 10 p.m. to 6 a.m. curfew and which closed the beaches for the holiday weekend. Gimenez says beaches will reopen Tuesday and outdoor activities, such as summer camps, can go forward with capacity limits and safety precautions in place.

Another Day, Another Coronavirus Record In Florida

Like many parts of the country, Florida is seeing a surge in the number of cases involving young people in their 20's and 30's. In Miami-Dade County, Gimenez says too many young people are going to congested places without wearing face coverings or observing social distancing. He says, "Contributing to the positives in that age group, the doctors have told me, were graduation parties, gatherings at restaurants that turned into packed parties in violation of the rules and street protests where people could not maintain social distancing and where not everyone was wearing facial coverings."

As cases have increased in Florida, Governor Ron DeSantis has resisted calls for him to take a more aggressive approach such as imposing a statewide mandate to require face coverings. On Monday, he downplayed concerns about the rising numbers. "We've got all hands on deck. And I think the people of Florida are responding positively," he said. "There's no need to be fearful. Let's just focus on the facts."

As for the surge in cases among young people, DeSantis asked that it be kept in perspective. "The number one age for cases in Florida is 21," he said. "And if you're 21 and you don't have significant co-morbidities, your fatality rate is pretty much zero." The governor said, "To me, that's comforting to know...that it's affecting folks that are less likely to see clinical consequences."