Accessibility links
Serbia Seems To Relent On Coronavirus Curfew After Violence Erupts In Belgrade : Coronavirus Live Updates Protesters gathered hours after an announcement that a curfew would be reinstated. Now President Aleksandar Vučić says it "probably" won't happen — despite an "alarming" surge in cases. 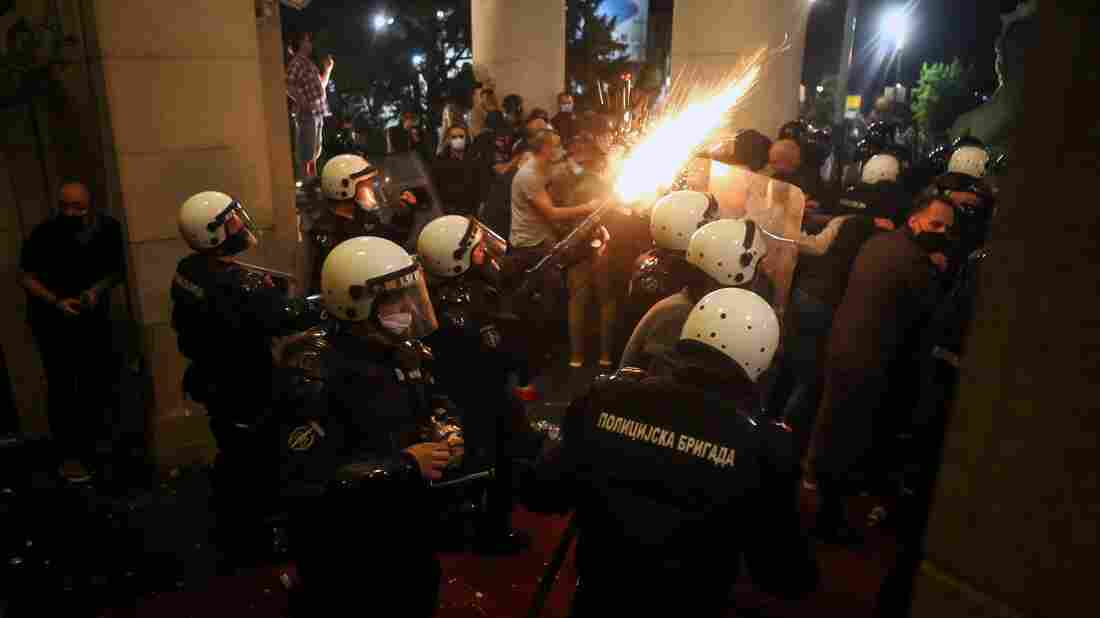 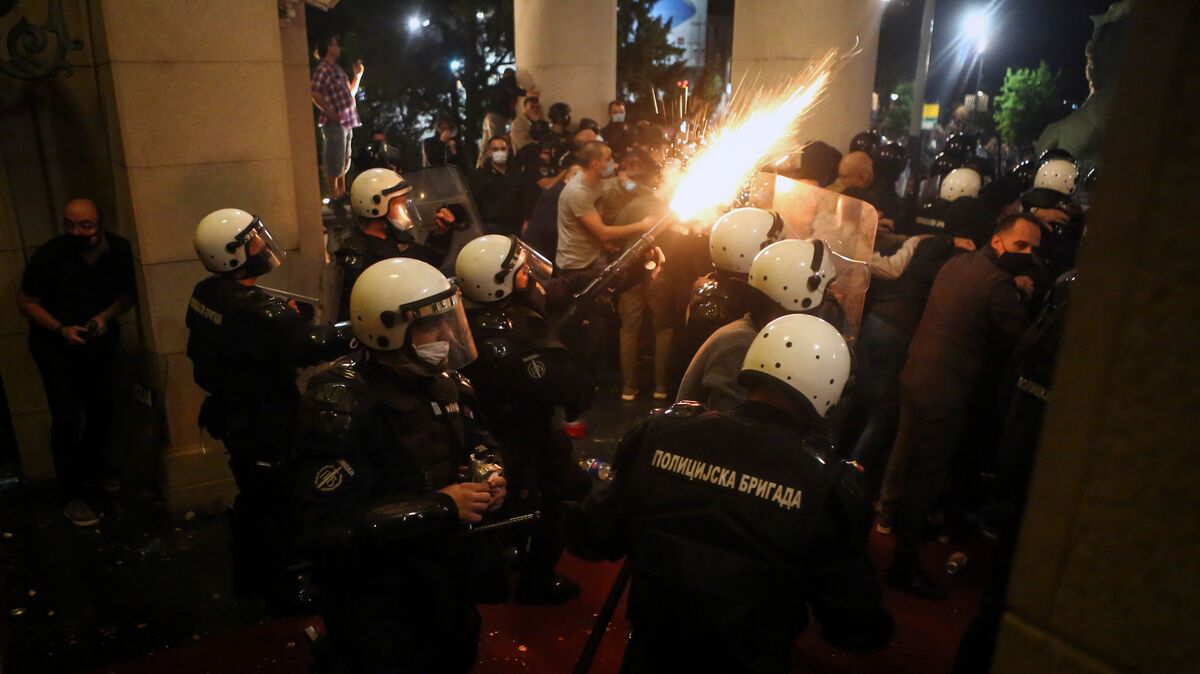 Protesters clash with police Tuesday night in front of the National Assembly building in Belgrade, Serbia.

The curfew in Serbia appears to have ended before it could even begin.

Serbian President Aleksandar Vučić suggested Wednesday that the country would "probably" not reinstate a curfew this weekend, less than a day after its announcement led to bloodshed in the capital. The country's health ministry clarified that officials have yet to make a final decision, even as new cases have surged.

Demonstrators gathered overnight in Belgrade to protest the coronavirus-prevention measure, some clashing with police outside parliament and even trying to storm the building.

Dozens of people were injured in the violence, which Vučić blamed primarily on "right-wing and pro-fascist demonstrators." He also said the Serbian government has evidence — without presenting any — that foreign intelligence officials were goading on the violence in an effort to destabilize Serbia.

Video on local media shows law enforcement resorting to the use of tear gas and a show of force that many observers criticized as excessive. Social media were awash with images of officers clubbing and roughly arresting protesters — though Vučić defended the police actions.

"They brutally attacked members of the police force, insulted them, stoned them, beat them," he told a news conference Wednesday, referring to the protesters. He added: "The police behaved with dignity, suffered incredible pressure and responded only when people occupied the assembly hall and damaged doors and other objects." 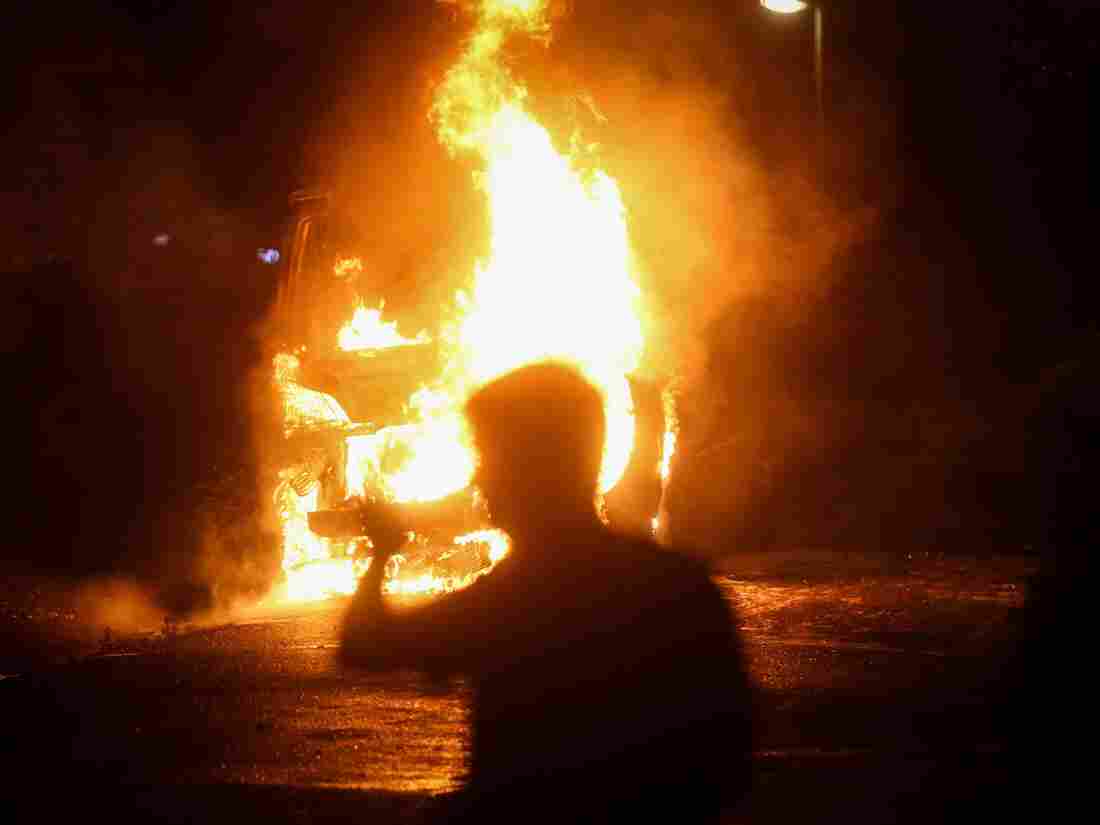 A man passes a burning police vehicle during a rally Tuesday that descended into clashes between police and protesters in Belgrade. Oliver Bunic/AFP via Getty Images hide caption 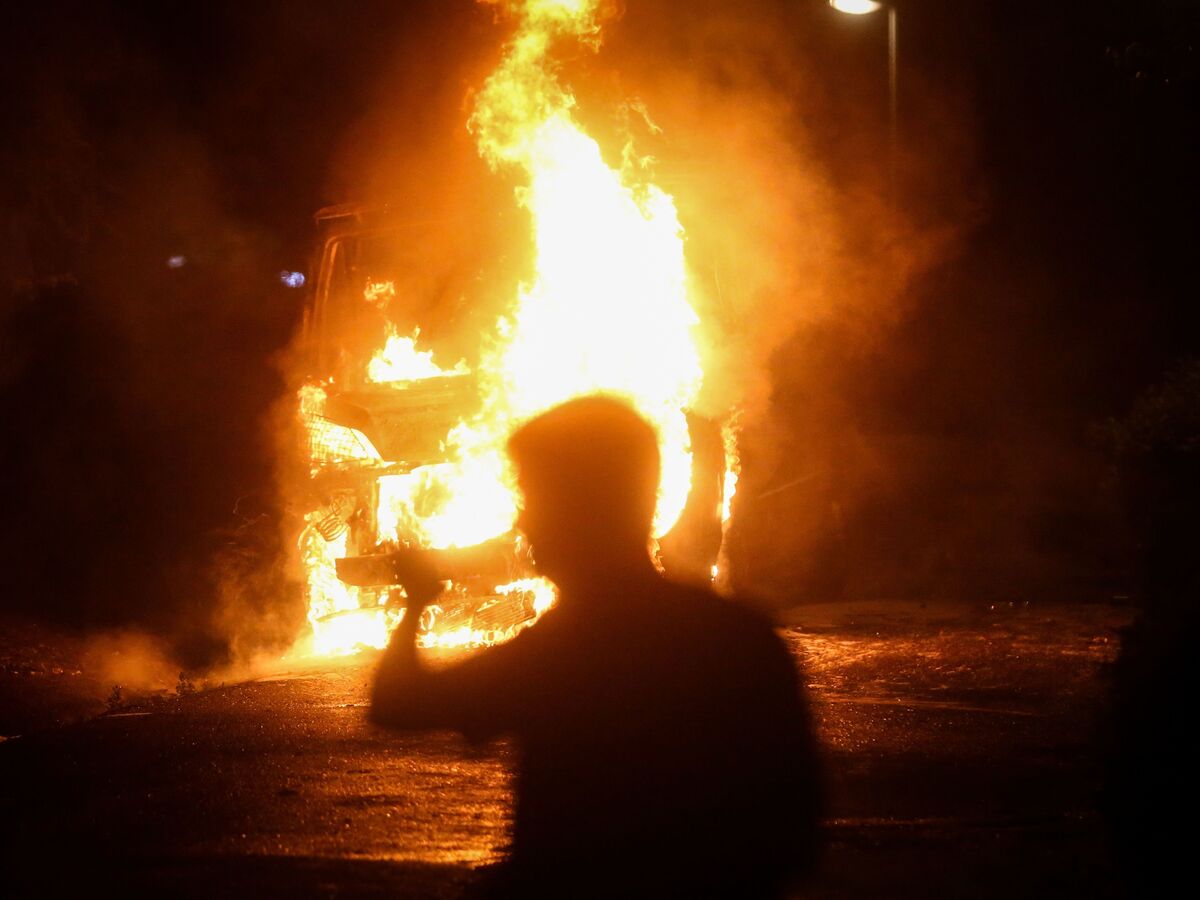 A man passes a burning police vehicle during a rally Tuesday that descended into clashes between police and protesters in Belgrade.

Meanwhile, Serbia is grappling with a resurgence of the coronavirus. The Balkan country reported its highest single-day death toll on Tuesday, with 13 deaths linked to the virus. The country of some 7 million has reported more than 17,000 confirmed cases — many of which came weeks after the country began to ease its shutdown measures in May.

Indeed, Vučić cited the surge as reason to reinstate some of the measures — including the curfew — that the government had implemented as part of a strict lockdown earlier this year.

"Belgrade is in a critical situation," he said in his initial announcement Tuesday.

Trust has been tough to come by, though, particularly with critics leveling accusations of increasingly authoritarian behavior. The president moved ahead with parliamentary elections late last week despite concerns that his government was tailoring its coronavirus response to suit him better politically.

Ultimately, after a boycott from many of the opposition parties, the president's party won handily, giving his allies a commanding position in the legislature.

Now, with the spike in coronavirus cases, Vučić is grappling with a situation he has called "alarming" — though it is not unique within the region. Several of Serbia's Balkan neighbors, including Kosovo and Bosnia-Herzegovina, have been grappling with resurgences of their own.