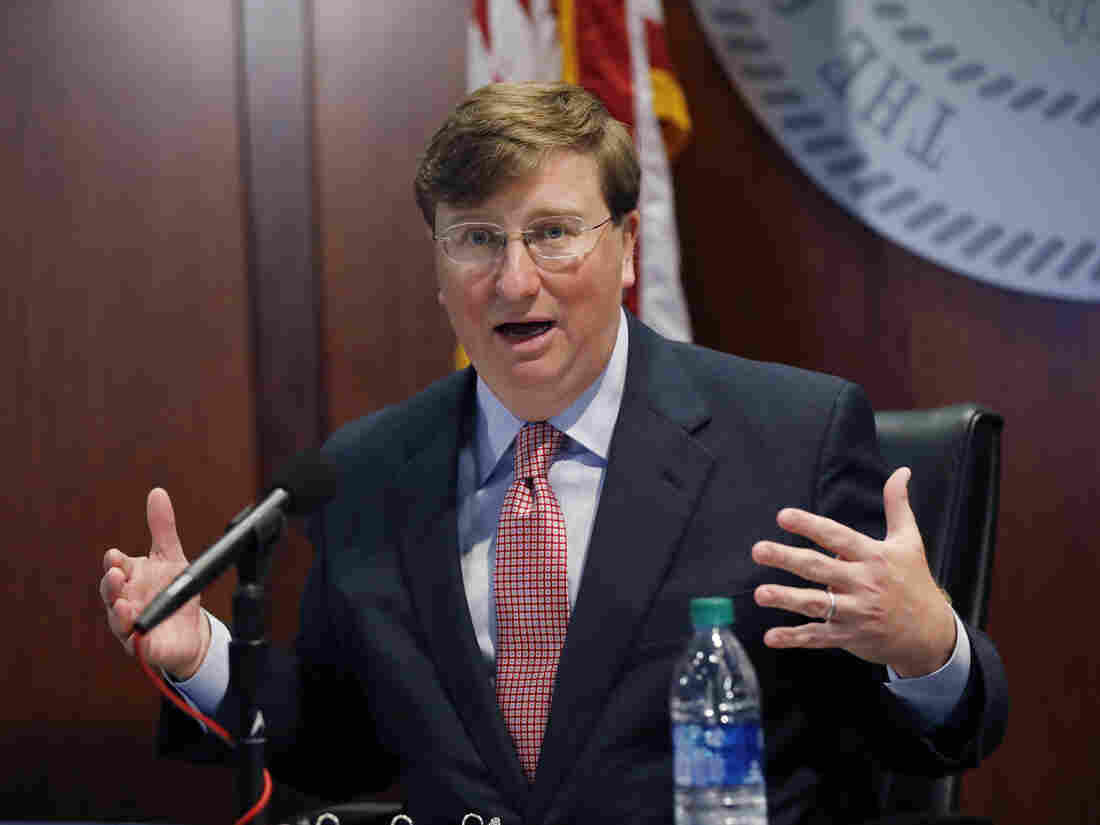 Mississippi Gov. Tate Reeves announced on Tuesday that masks will temporarily be required statewide and certain school districts must delay the start of in-person instruction. The state is ranked second for number of new cases per capita. Rogelio V. Solis/AP hide caption 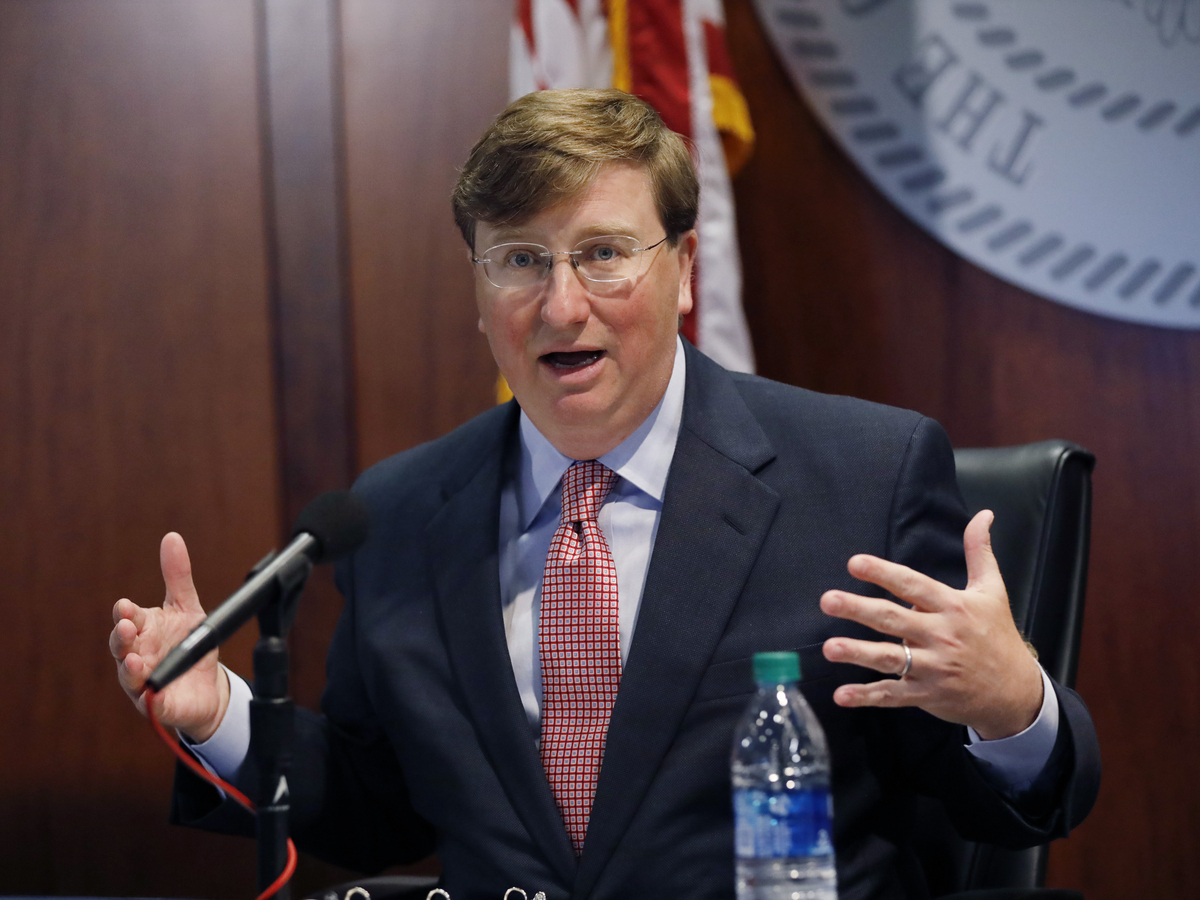 Mississippi Gov. Tate Reeves announced on Tuesday that masks will temporarily be required statewide and certain school districts must delay the start of in-person instruction. The state is ranked second for number of new cases per capita.

With Mississippi on track to become the number-one state for new coronavirus infections per capita, Gov. Tate Reeves is implementing a temporary mask mandate and delaying the reopening of schools in certain counties.

Reeves announced the new measures at a press conference on Tuesday.

"We know that with this virus, times change every single day," he said. "The data changes, the situation changes, and we've got to be prepared to change as well."

Reeves issued a statewide mandate requiring people over the age of 6, with some exceptions, to wear face coverings in indoor public places and outdoors in situations where social distancing cannot be maintained. The order takes effect on Wednesday morning and will last for two weeks.

Mask mandates were already in effect in 37 of the state's 82 counties, thanks to a series of executive orders requiring stricter measures in harder-hit communities.

Acknowledging that some counties are struggling to contain the spread of the coronavirus more than others, Reeves also announced an executive order delaying the reopening of grades 7 through 12 in eight school districts until August 17.

The order also requires all Mississippians to wear a mask when inside a school building or classroom, or outdoors on a school campus where social distancing is not possible.

Reeves said the targeted counties — Bolivar, Coahoma, Forrest, George, Hinds, Panola, Sunflower, and Washington — are considered hot spots both because of their absolute number of cases and the number of confirmed cases per 100,000 residents in the past two weeks.

"We must pump the brakes in hardest-hit areas," he said.

When Can Kids Go Back To School? Leaders Say 'As Soon As It's Safe'

Reeves has long been opposed to prolonging school closures, saying keeping students at home poses risks to their development and learning, especially if they have two working parents.

State guidance gave school districts the option to offer traditional or virtual learning, or a mix of both, and required them to submit reopening plans by July 31.

Reeves said on Monday that he had spent the weekend poring over 598 pages of those plans, and would issue an executive order to "mitigate the risk of education."

"We have to balance the very real risk of more community spread and the devastating life impact of extended school closures," he explained.

The Mississippi Association of Educators, the state's largest teachers organization, responded to Reeves' announcement in a statement posted to Facebook on Tuesday evening.

They said the plan puts students and educators and their families at risk, calling it "reckless and irresponsible."

The educators are asking for a month-long hiatus on in-person instruction, with an assessment at the beginning of September to determine next steps.

"No one is proposing an indefinite hold on going back into buildings," they wrote. "We are simply requesting a few weeks to lower the number of new COVID cases and develop a plan that ensures every school in every district has the resources they need to get back into buildings safely."

One of the first to reopen, Corinth School District, reported that one individual at its high school had tested positive during the first week of school. By Tuesday, that number was up to five.

According to researchers at Harvard, Mississippi is ranked second only behind Florida when it comes to the number of daily new cases per 100,000 people.

Dr. Ashish Jha, director of Harvard Global Health Institute, wrote in a tweet on Saturday that while Florida is "slowly inching down," Mississippi is "going up." He said the state already has the highest test positivity rate in the nation, at 22%.

Dr. LouAnn Woodward, the top executive at the University of Mississippi Medical Center, told NPR on Monday that hospitals are feeling the strain.

"Speaking from a medical standpoint, if you look at the data, what we have been doing has not changed the trajectory of our number of hospitalizations, the number of new cases, etc.," she said. "We need to do something different."

The state is currently under a "Safer at Home" order that allows all businesses, including restaurants and bars, to open in line with safety guidelines like capacity restrictions. A number of counties are under additional orders with stricter social distancing requirements.

Also on Tuesday, the Mississippi State Health Officer issued a statewide order requiring anyone diagnosed with COVID-19 to self-isolate at home for 14 days.