Accessibility links
Pascal Simon's Online Cooking Camp Gets Kids To Make Meals For Their Families : Coronavirus Live Updates Online instruction is hard, right? Well there's a teacher—a chef, actually—who appears to have cracked the code. She says her cooking classes for kids work better now than when they were in person. 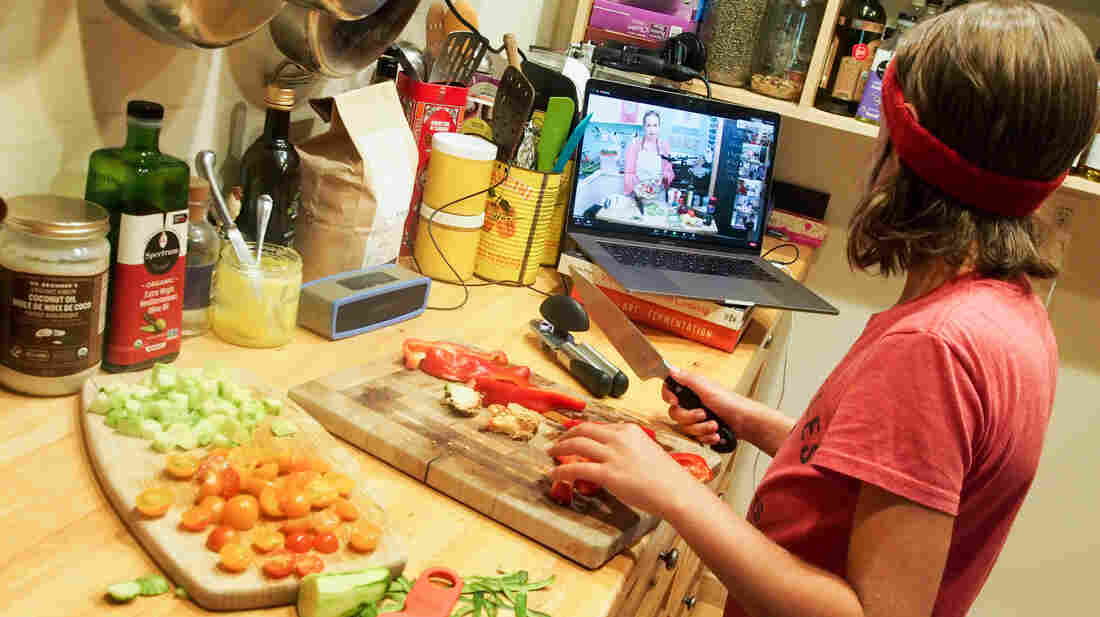 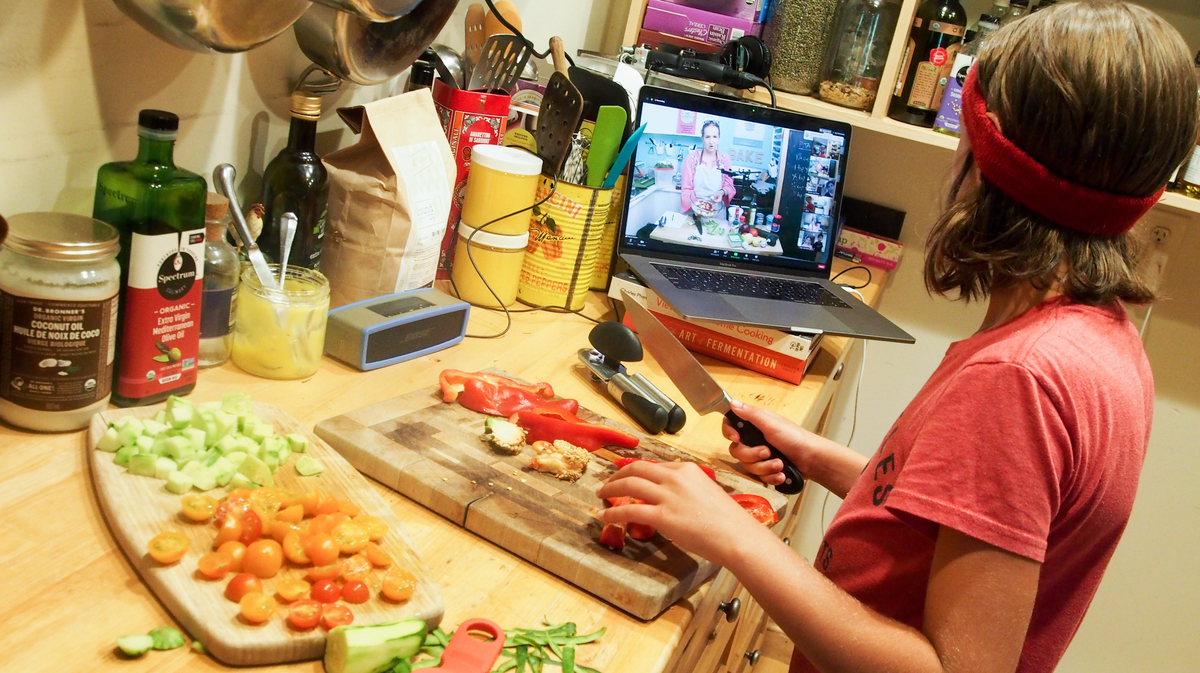 Wiley James, 10, prepares a meal as part of an online cooking camp run by a chef in Austin, Texas.

A lanky, long-haired kid stands in front of a stack of shelves lined with more than a dozen varieties of canned beans. He's 10, and his name is Wiley. He's got a shopping list in his hand and a mask on his face. This is the first time he's been in a grocery store in over five months. His cart is loaded with onions, limes, yogurt, bell peppers, feta cheese. Now he needs chickpeas, and although he's peering at a can with a picture of chickpeas on the label, his brow is furrowed.

He places the can in his cart, gives the cart a shove, and moves on in search of chili powder.

Wiley is my son, and one measure of how much the world has changed in the last half year is that the list of what he needs for summer camp does not include a sleeping bag, a flashlight, or even bug spray.

He needs a can of chickpeas.

That's because Wiley — who lives in western Massachusetts — is about to join 30 other kids from as far away as Vancouver, Canada, San Jose, Ca. and Washington D.C. in a radical project: they will cook dinner for their families for an entire week.

The location of summer camp 2020 is each of these kid's own kitchen.

Welcome to Dinner Club. The menu this week includes Indian butter chicken, Greek salad with falafel, and fish tacos — every dish made entirely from scratch.

Dinner Club is conceived and taught by Pascal Simon, known to her students as Chef Pascal. The German-born chef has been teaching baking classes for kids out of her home kitchen in Austin, Texas, for a decade. She's had a popular following for years among foodie families and homeschoolers in the city. Simon says that up until a few months ago her classes were mostly focused on "cute stuff" like cookies, Pop Tarts, and French macaroons. A popular offering every summer was called "Cupcake Camp."

Then came the pandemic.

Simon had only ever taught in person, a dozen kids packed into her kitchen. Her classes were about hands-on proximity, tactile problem-solving, and community-building. She says the weekend the world shut down she threw herself a pity party. She had never once been on Zoom.

The Monday after shutdown, Simon began offering online baking classes to any kid who signed up, initially for free. She expected classes to be lightly attended by former students, but within weeks she had up to 45 kids signing up from across North America. The cooking sessions were energetic and chaotic, with Simon picking up numerous new teaching skills on the fly.

But new skills weren't enough. Although parents appreciated the classes and frequently expressed amazement at what their stuck-at-home kids were accomplishing, these same parents also had a problem.

"Who needs more cupcakes?" Simon says, her voice rising in exasperation. "Who needs a weeklong of cupcakes?" 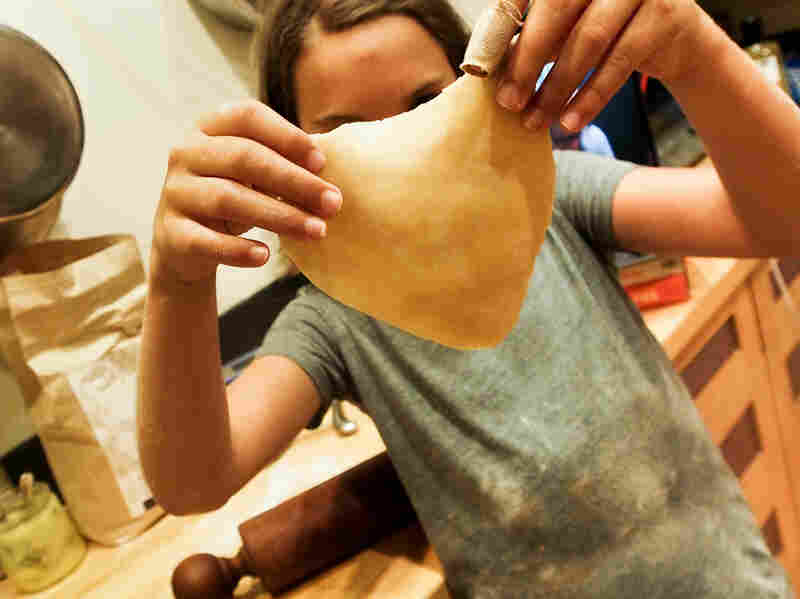 The reporter's son and 30 other kids from as far away as Vancouver, Canada, San Jose, Ca. and Washington D.C. cooked dinner for their families for an entire week. Ben James/NPR hide caption 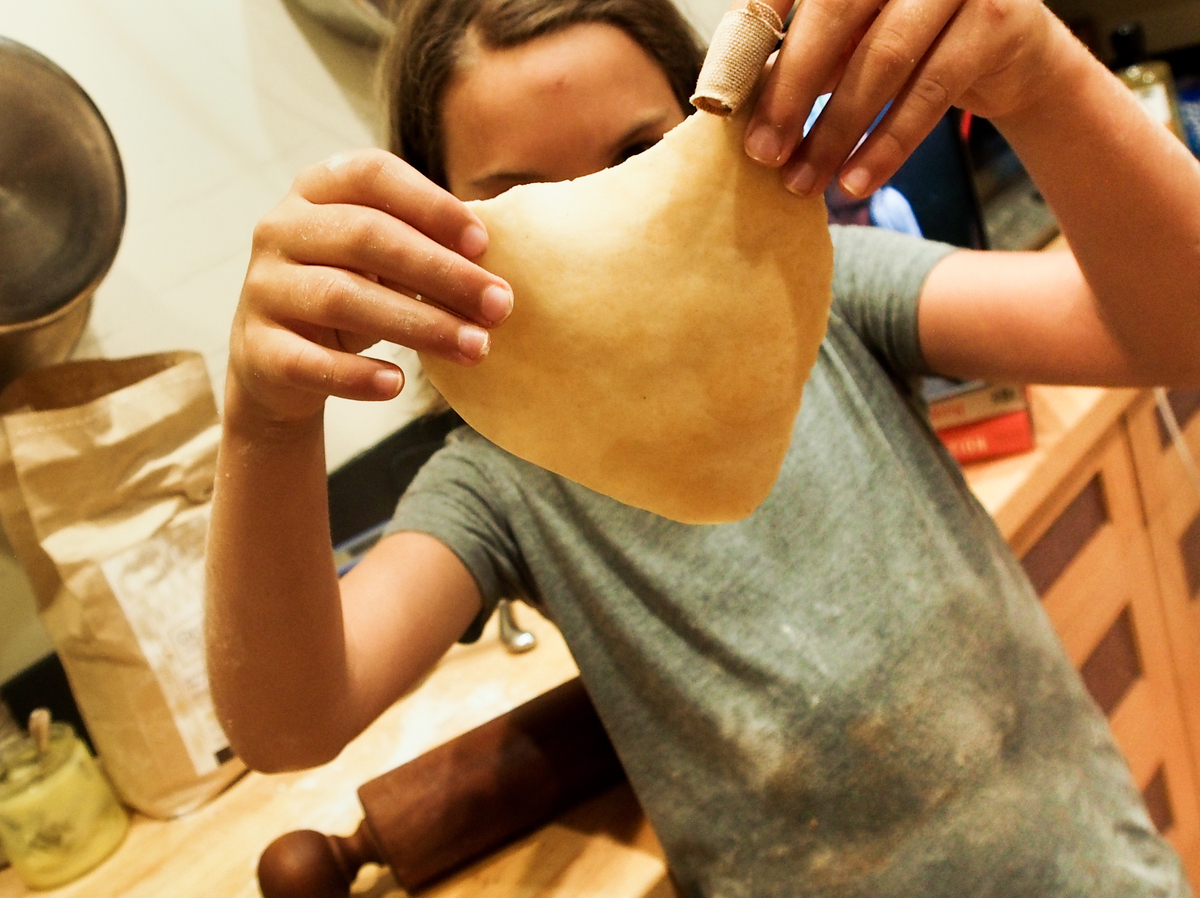 The reporter's son and 30 other kids from as far away as Vancouver, Canada, San Jose, Ca. and Washington D.C. cooked dinner for their families for an entire week.

She pivoted and started focusing on dinners. This meant knives, hot pans, safe food handling. It also meant that Chef Pascal's students were doing something highly relevant — even necessary — for their families. She even made the kids do their own dishes between other tasks.

"There's nothing better for a parent," Simon says, "than when you come home, or come out of your office, and dinner's ready and the dishes are done."

She pauses a moment.

"I think the dishes done is almost better than the dinner."

In late July, we position the laptop at the far end of the kitchen counter, and Wiley logs on to his first day of Dinner Club. Chef Pascal greets the students individually. Within fifteen minutes, each child on the Zoom screen has raw chicken on a cutting board and a knife in their hand.

"If your chicken is already cut up, I'm sorry," Chef Pascal says. "I told your parents not to do that."

An hour later, our kitchen smells incredible. The butter chicken that night is perfectly tender after simmering in cream, tomatoes, cumin, garam masala, and other spices. My wife and I look at each other across the table.

On the following night, the legume also known as garbanzo makes a star appearance. The falafels are crispy on the outside, silky within. I find myself competing for these falafel balls with Wiley's older brother. He's 14 and has gone more-or-less nocturnal since the shutdown, doing little more than DMing friends while watching Breaking Bad on a continuous loop.

Dude scarfs the falafels right up.

On day three of Dinner Club, eight-year-old Juliet Wilson starts off with a question.

"Chef Pascal, are we only making the chicken fajitas, the tortillas, and the guacamole and pico?"

There's a pause, and then comes Simon's deadpan response.

"Only. Yes, Juliet. We're only making the tortillas, the guacamole, the pico de gallo, and the fajitas."

Wiley cracks up. Only. The exchange sums up just about everything that's good about this week. Not just Chef Pascal's dry sense of humor and her genuine appreciation of her students, but also the sheer ambition of their collective undertaking. Because — make no mistake — this class is exhausting. Each night, when Wiley's done, his feet hurt so bad he soaks them in ice, moaning and complaining. Then he starts talking about what he's going to cook the next day. (For the record, although Wiley tries to keep up, my wife and I will do a significant amount of dishes this week.)

As it turns out, Wiley's not the only cook with foot trouble!

"I did not know that my feet could hurt so much," says Hazel Griffin, age 10. She and her twelve-year-old brother Eamon — they're both from Austin like the chef — participated in three weeks of Dinner Club this summer. Prior to June, they'd hardly cooked at all. Hazel says there's been some stress and bickering between them. Cooking, she says, can be really hard.

"But if you have a partner and you guys get along" — Hazel casts a sidelong gaze at her brother — "then it can be a lot easier."

Eamon nods. "When your parents actually like the food," he says, "the look on their face is enough to keep you wanting to come back. Even if it is hard, even if it is stressful."

There's an essential thing that Chef Pascal gets about teaching remotely during a pandemic. It's that kids who are bored or scared or distracted — kids who've had every ritual and routine stripped from their lives — those kids don't need excessive comforting or sympathy.

Those kids need a challenge.

Back in our kitchen, Wiley holds a clumpy, deeply-creased ball of what's supposed to be tortilla dough up to the screen. He hits the space bar, unmuting himself.

Wiley performs the maneuver. He says, "Sort of."

"Okay. Sort of is not quite ready, so keep kneading it a little bit longer."

Then another face breaks onto the screen. It's Hazel Griffin.

"Chef Pascal," she says, "can you please slow down? My cat got out and I need to go grab him."

Wiley presses his palms into the dough and once again cracks up.