Accessibility links
Coronavirus Outbreak Reported At Georgia School After Classes Resume : Coronavirus Updates North Paulding High School made headlines when images of crowded halls were posted on social media. The school is switching to virtual learning for at least two days while facilities are disinfected. 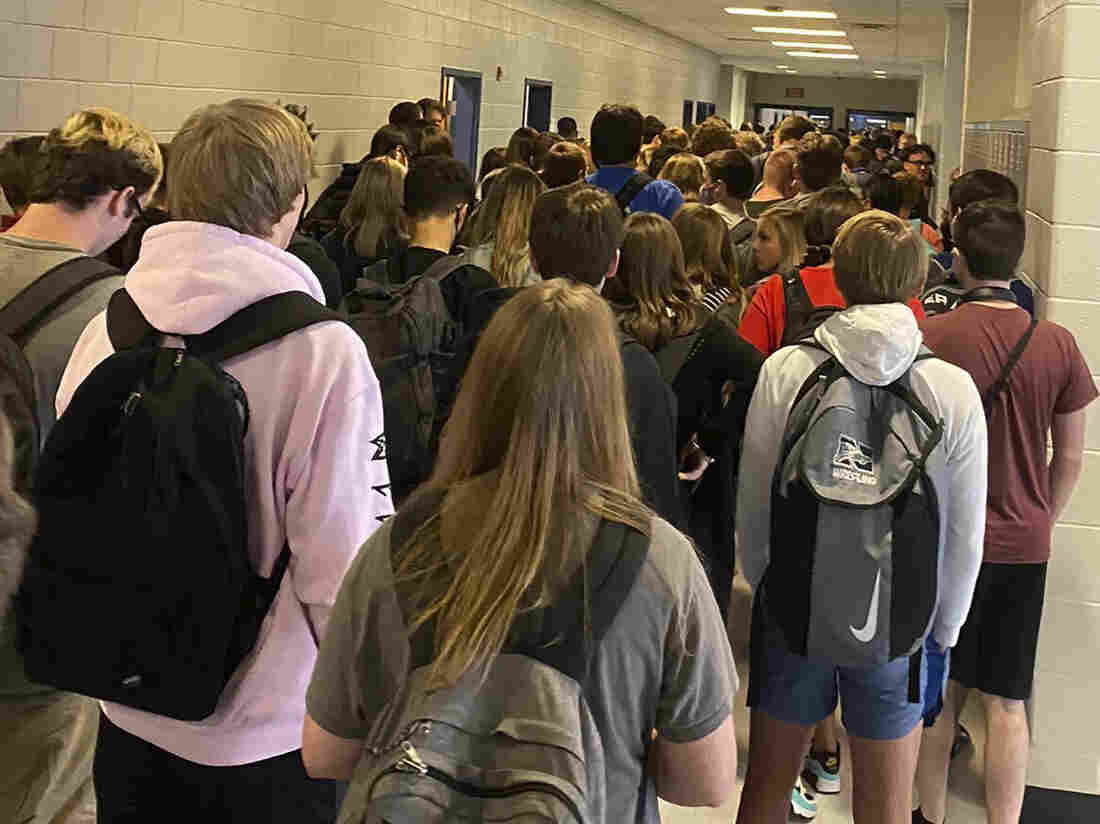 Officials at North Paulding High School in Dallas, Ga have suspended in-person learning for at least two days following a cluster of virus cases was discovered at the school. Above a crowd of students packs a hallway on Aug. 4. Twitter via AP/AP hide caption 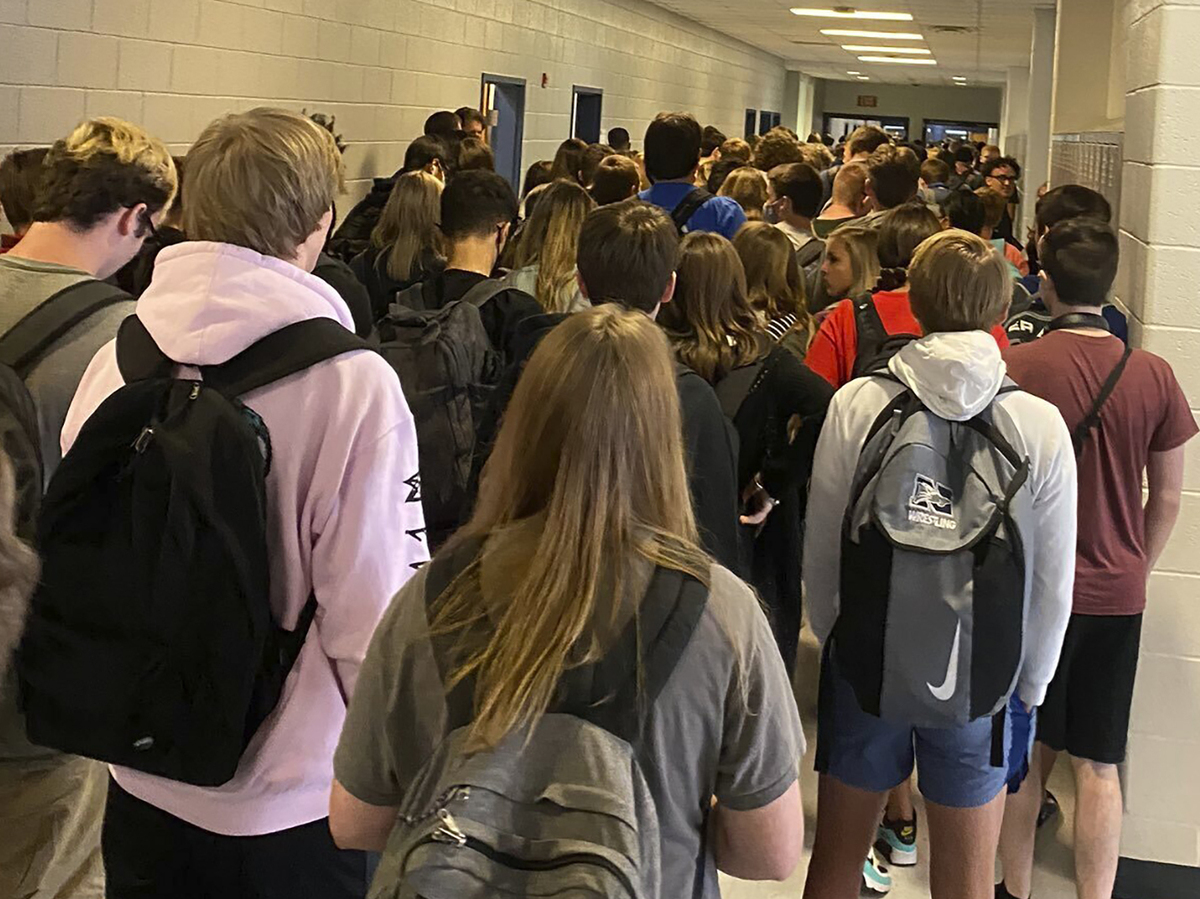 Officials at North Paulding High School in Dallas, Ga have suspended in-person learning for at least two days following a cluster of virus cases was discovered at the school. Above a crowd of students packs a hallway on Aug. 4.

A coronavirus outbreak has been discovered at the Georgia high school that drew national attention last week after photos and videos of crowded hallways and unmasked students went viral on social media.

Nine people at North Paulding High School tested positive for the coronavirus after the first week of in-person instruction, according to officials in Paulding County, an outer suburb of Atlanta.

The school is now "temporarily switching" to virtual learning for two days while its facilities are being disinfected, according to a letter from Brian Otott, the county school district superintendent.

Extracurricular activities are also canceled. The school had been planning to hold softball and volleyball games on Monday and Tuesday.

"I apologize for any inconvenience this schedule change may cause, but hopefully we can all agree that the health and safety of our students and staff takes precedence over any other considerations at this time," the letter states.

Otott's weekend letter announcing the canceling of two days of in-person classes came on the heels of one from Saturday that was sent by North Paulding High School Principal Gabe Carmona, The Atlanta Journal-Constitution reports.

"At this time, we know there were six students and three staff members who were in school for at least some time last week who have since reported to us that they have tested positive," Carmona's letter stated.

Otott originally defended his decision to reopen schools, citing conditions outlined by the Georgia Department of Education's health recommendations. In a note last week, he admitted a photo posted on social media of crowded hallways "does not look good" but also added the scenes were taken out of context, as The New York Times reported.

Two students were suspended for sharing images and videos on social media that showed throngs of students — most of them without protective facial coverings — filling school corridors last week.

That prompted a backlash, including from people who said school officials were attempting to silence the students.

Audio obtained by WGCL-TV, a CBS affiliate in Atlanta, appeared to have a school official warning North Paulding students last week that they could face "consequences" if they share images that are deemed "negative."

"Anything that's going on social media that is negative or alike without permission — that's photography, that's video, that's anything — there will be consequences," a man can be heard saying in the recording.

A few days later, in a letter dated Aug. 7, Otott announced the school district was rescinding the suspensions "following a review of the situation."

This is what it looks like even with split dismissal. pic.twitter.com/erCA2lhOUb

One of the students who publicly acknowledged sharing the images, Hannah Watters, said she posted her video "out of concern and nervousness."

"I was concerned for the safety of everyone in that building and everyone in the county because ... guidelines that the CDC has been telling us for months now weren't being followed," Watters told CNN.

In a subsequent interview with the cable network, Watters said she, her family and friends have been receiving screenshots of group chats that include threatening messages, including one that reads, "I know where this girl lives" and another saying, "We're going to jump every girl named Hannah in the tenth grade."

The situation in Georgia is unfolding as school districts across the country face unprecedented challenges in figuring out how to reopen safely. The number of confirmed infections in the United States has now topped the 5 million mark.

A recent joint report from the American Academy of Pediatrics and the Children's Hospital Association estimate some 97,000 children tested positive for the virus in the U.S. in the last two weeks of July.

The Trump administration has pressured schools to fully reopen in the coming weeks. However, last month Randi Weingarten, the head of the powerful American Federation of Teachers, said the union would support educators going on "safety strikes" if school health precautions were not met.

Weingarten added that the AFT will allow local unions to make the final decision on whether to order any strikes.