Accessibility links
With New COVID-19 Cases, New Zealand Ramps Up Restrictions To Quash Virus : Coronavirus Updates Four new likely cases of COVID-19 are linked to a cluster in an Auckland family announced Tuesday. The country returns to tighter restrictions and is promoting an app to help with contact tracing. 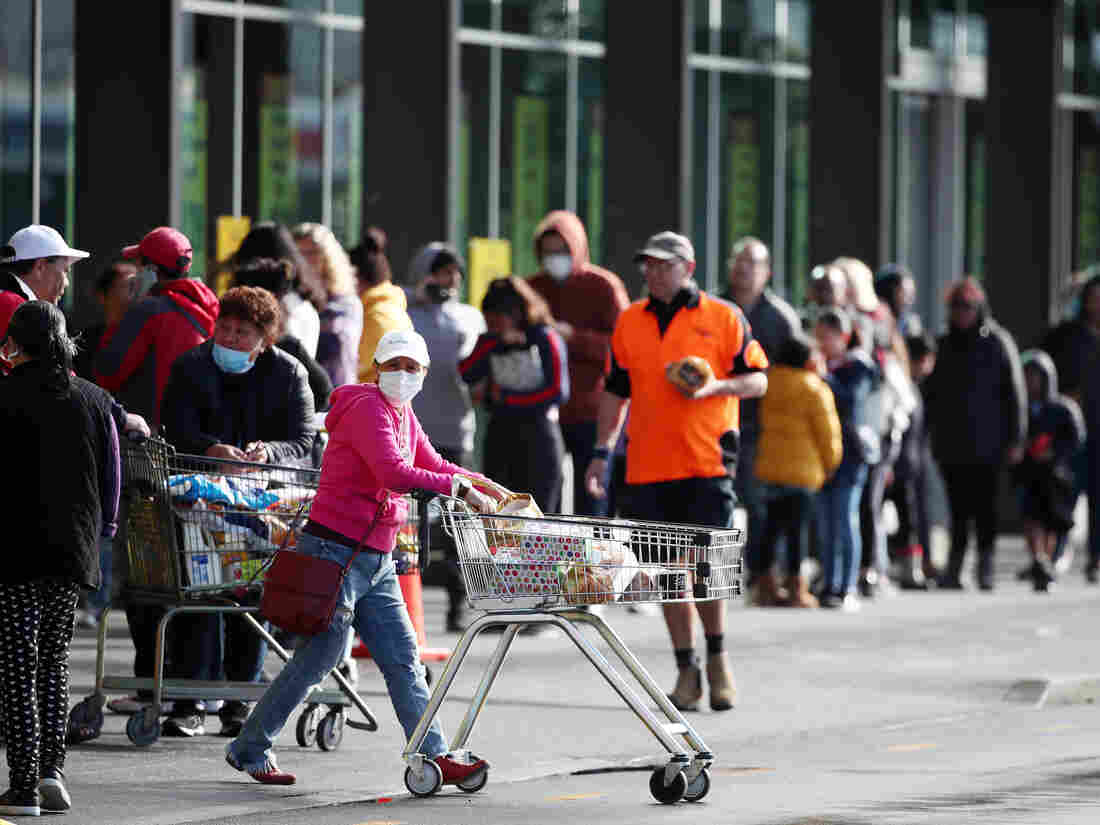 People line up outside a supermarket in a suburb of Auckland, New Zealand, on Wednesday before a three-day lockdown goes into effect. Four new COVID-19 cases were diagnosed in Auckland, and an additional four probable cases have been identified. Fiona Goodall/Getty Images hide caption 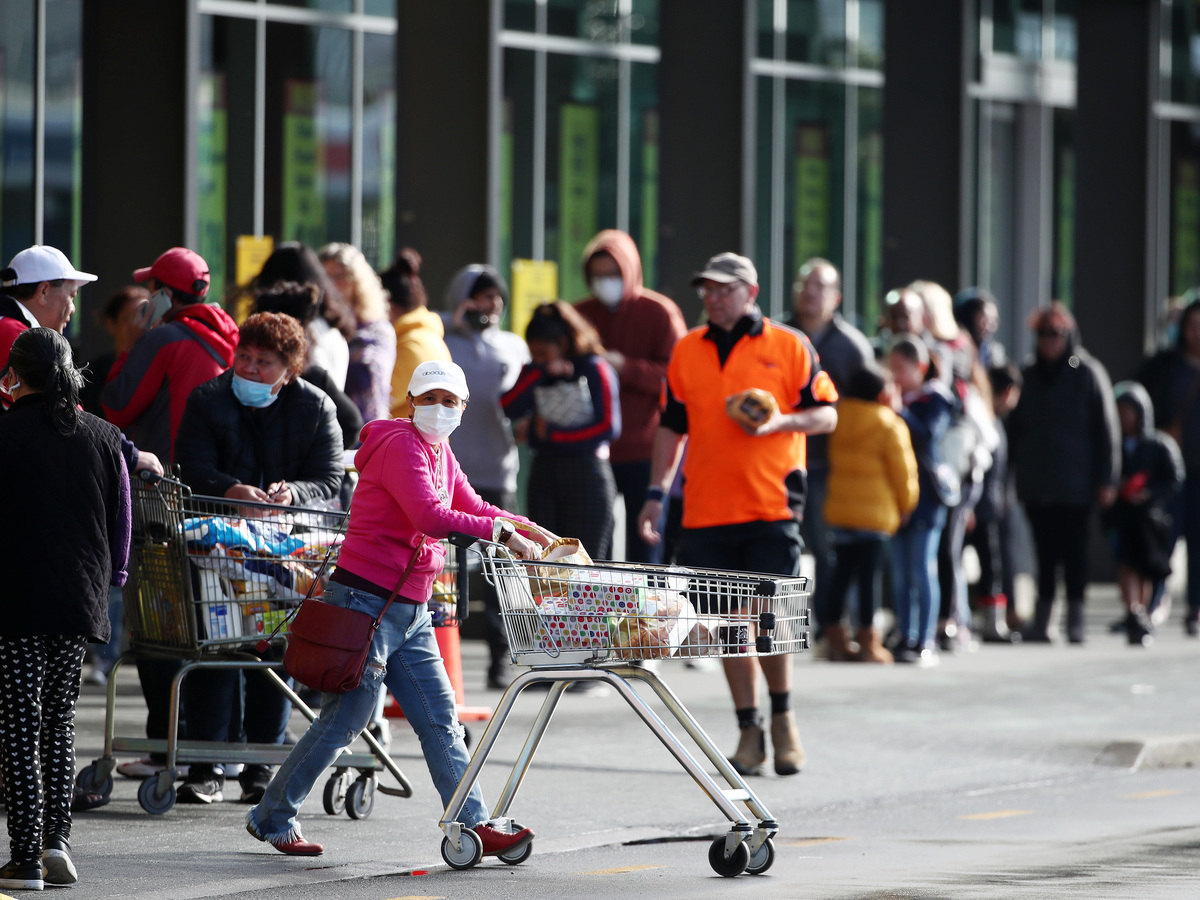 People line up outside a supermarket in a suburb of Auckland, New Zealand, on Wednesday before a three-day lockdown goes into effect. Four new COVID-19 cases were diagnosed in Auckland, and an additional four probable cases have been identified.

After more than 100 days without any community spread of COVID-19, New Zealand moved to an elevated alert level Wednesday with news of four new cases and another four probable ones.

The country had returned to normal life, but the mystery of the new outbreak's source has led to increased restrictions and concern in the island nation.

The first four cases are members of the same family in the city of Auckland. The new probable cases — based on symptoms but still awaiting test results — are linked to the cases in the Auckland family.

"Two are work colleagues and two are another related household that one of the cases had stayed at in the preceding week," Dr. Ashley Bloomfield, New Zealand's director-general of health, said of the probable cases in a media conference Wednesday.

At noon Wednesday, New Zealand began a three-day period at alert level two, with Auckland at the higher level three. The country had been at level one since June 9 when life had largely returned to normal.

Under the tighter level three restrictions, most businesses and schools in Auckland are closed, and bars and restaurants may only offer takeout. Elsewhere in the country, level two measures mean people can still go to work and school but are urged to take safety precautions, including social distancing and the wearing of masks.

Despite requests not to engage in panic buying and assurances that grocery stores would remain open for contactless pickup and delivery during the three-day period, Aucklanders formed long lines at supermarkets before the measures went into effect.

Testing centers for the coronavirus throughout the city also saw long lines. Bloomfield said 6,000 to 7,000 people were being tested in Auckland as well as in the cities of Christchurch, Wellington and Rotorua. Special testing sites are available to those identified as close or casual contacts of the Auckland cluster.

The new probable cases announced Wednesday include three adults and one teenager. "They're probables because there's a clear epidemiological link [to the other four cases] and they're symptomatic," Bloomfield said. All four are in isolation, and contact tracing is underway as they await test results.

Bloomfield said four members of the family in the Auckland COVID-19 cluster had traveled in recent days to Rotorua, a city known for its geothermal features and Maori culture, where they visited tourist attractions and eateries. Two members of the family subsequently tested positive for the virus, raising the possibility they could have spread it to Rotorua.

The government is conducting genome testing to identify the strain of the virus in the new cluster.

More than 200 contacts of the new cases had been identified, mostly at two workplaces where the individuals who tested positive are employed. One is Americold, a cool storage facility in Auckland. That facility has been swabbed for the virus to investigate the possibility that the virus could have arrived in New Zealand via refrigerated freight.

Bloomfield ordered employees and contractors at Americold and a finance company called Finance Now, as well as their family members, to isolate at home and not go to work until they are contacted by contact tracers and given further direction. Because Auckland is under level three alert, people at those workplaces would be staying home anyway.

In New Zealand, Life Was Ordinary Again With No Virus Spread, But It Didn't Last

First, it's now mandatory for any business or service to display prominently a QR code for the country's NZ Covid Tracer smartphone app at all entry points. That will enable Kiwis to use the app to scan the QR code and log the businesses they visit, making it easy for contact tracers to notify people of any possible exposures.

"The ability to contact trace is one of the key tools we have to find new cases and get them in isolation to avoid future lockdowns," Ardern said. "Using the app is a big investment in keeping our businesses and economy open." The prime minister said that more than 100,000 people had downloaded the app the previous night.

Second, people flying out of Auckland must now wear face coverings. The only people traveling by plane from Auckland, she noted, are those who don't live there and need to return home.

During this time, Auckland residents are asked but not required to wear face masks. The government has released 5 million additional masks from the national stockpile. Ardern said the government is working with social service agencies to distribute 3 million masks to those who might struggle to afford or have access to them.

The new outbreak raises the possibility of postponing New Zealand's upcoming election, scheduled for Sept. 19. Parliament was to be dissolved on Wednesday, but Ardern delayed that until at least Monday in case the body needs to meet in short order. Under New Zealand law, the election could be postponed about two months, The Associated Press reported.

New Zealand now has 26 active cases. None of the patients require hospital-level care. Excepting the four cases and the four suspected in the Auckland cluster, the rest of the nation's cases are in people arriving in the country; they were all put immediately into managed isolation facilities or quarantine. Every person arriving in New Zealand is required to be isolated from others in the country for a minimum of 14 days.

To illustrate the importance of taking the risk of spread seriously, Ardern pointed on Wednesday to neighboring Australia, which had more than 300 new cases the previous day and more than 650 people hospitalized.

"Our response to the virus so far has worked. It opened our economy and our communities and gave New Zealanders freedoms that we cherished and we all want to get back there as soon as we can," Ardern said. "We know how to beat this, but we also know we don't need to look far to see what it can mean if we don't get on top of it."