Accessibility links
Back-To-School Season Is Confusing, But Sales May Break Records : Coronavirus Live Updates Preparing for both in-person and virtual learning has families budgeting for new school supplies like masks and bleach wipes as well as bigger purchases like laptops, speakers, desks and chairs. 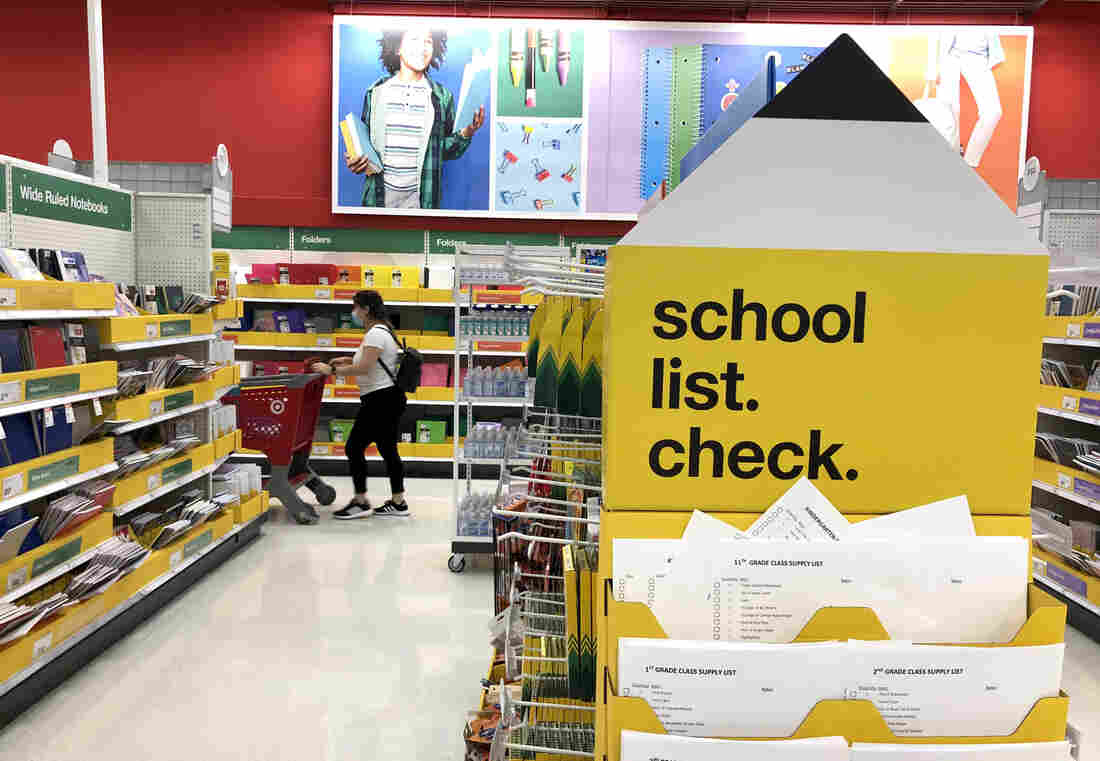 A shopper walks past shelves of school supplies at a Target store in San Rafael, Calif. Preparing for both in-person and virtual learning has families budgeting for new school supplies and bigger purchases. Justin Sullivan/Getty Images hide caption 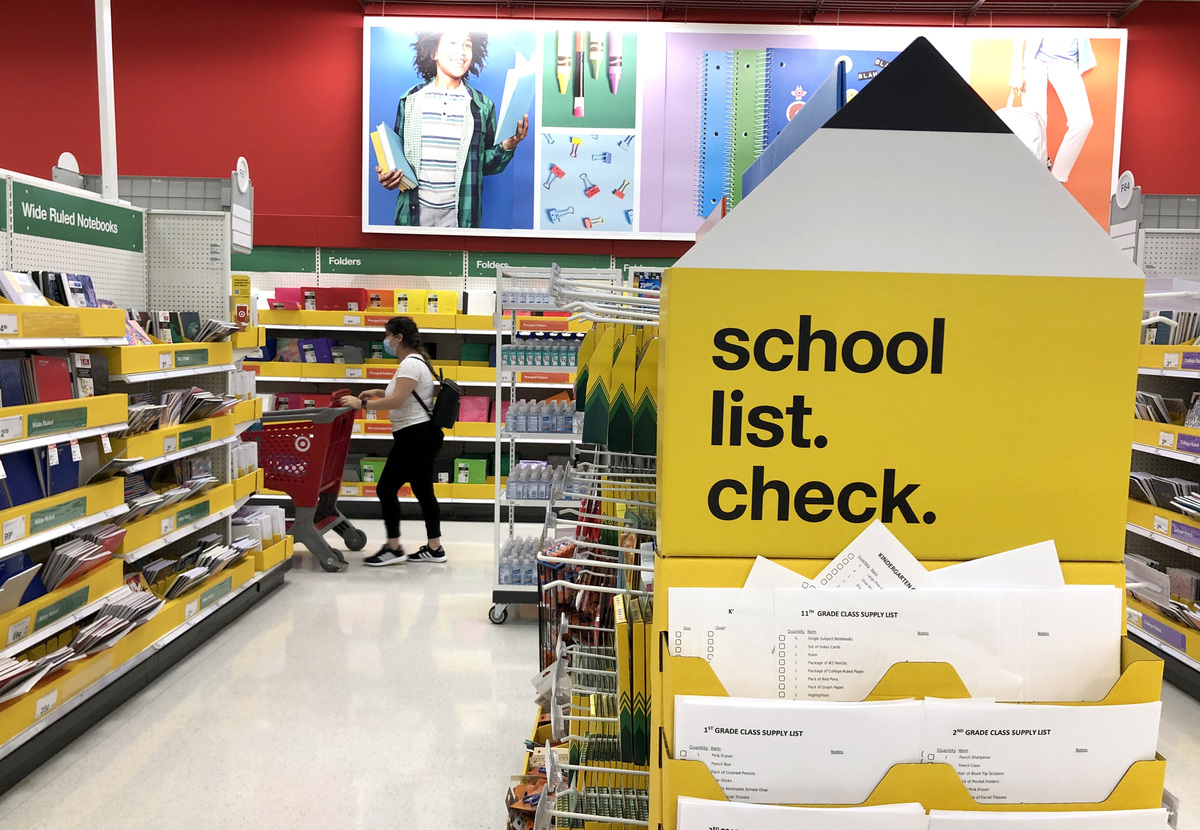 A shopper walks past shelves of school supplies at a Target store in San Rafael, Calif. Preparing for both in-person and virtual learning has families budgeting for new school supplies and bigger purchases.

Getting her daughter ready for the first day of sixth grade, in a normal year, Lidia Rodriguez would have by now spent a pretty penny on a lunchbox, her charter-school uniform and a special backpack, perhaps embroidered with her name: "Sofia."

But why buy a new uniform if last year's top still works for a Zoom call? And why splurge on a new backpack when the walk to school is a shuffle from the kitchen table to the bedroom desk?

"I don't feel like investing ... until she actually physically starts," says Rodriguez, whose home in Tampa will be her daughter's classroom at least for nine weeks.

Rodriguez still did buy supplies: notebooks and folders, pens and pencils. Sofia's father got her a laptop. And she'll need more when — and if — she returns to the classroom: three masks a day, bleach wipes, new shoes, the uniform.

If lots of families end up having to stock up for multiple scenarios — both learning in school and virtually — back-to-school and back-to-college spending could actually hit a new record, topping $100 billion, according to the National Retail Federation.

Big-ticket items like electronics and desks are a major reason, says Katherine Cullen, senior director for industry and consumer insights at the retail group.

"Families who last year might have been looking at calculators or maybe a new smartphone ... are now looking at bigger dollar items like laptops, tablets, desktops," Cullen says. "But they're also buying things that you might not expect as much — desks, lamps, headphones — a lot of new items that weren't traditionally on the school shopping list."

Back-to-school is usually the second-biggest shopping season after the winter holidays. And so it's something of a test for retailers, who are in a tailspin from the year's mass shutdowns, layoffs and furloughs.

"The back-to-school season is off to a slower start than usual, given the uncertainty around the timing of students physically returning to school," Walmart Chief Financial Officer Brett Biggs said on a call with analysts last week. He pointed out "understandably" low demand for school supplies, backpacks and clothes. "We expect the season to be choppy and come later than normal," Biggs said.

Retail marketers have been getting creative to keep people spending, embracing the oddity and disarray of pandemic schooling, pushing discounts on computers and ideas for faking a dorm room at home.

Macy's showed a montage of children at home learning to build a robot or tend to a garden. "New school year, whatever that means," sang a women in an Old Navy commercial. Target promoted contactless pickup of online orders. Even Ace Hardware got in on the pitch: Now that face masks and disinfectants are on the list, why not stock up for school at a home improvement store?

"The biggest priority for me this year was setting up the home workspace," says Kisha Washington, who in the spring had to convert her Chicago home into both her office and a classroom for her daughter, now a high school junior. This meant a mounted computer monitor, good speakers and new task lighting.

That "morphed into her wanting task lighting plus tea-light-patio-hanging-from-the-ceiling-random-LED-lighting," Washington says with a laugh. "So she's also taking this opportunity to, you know, redecorate — which has been good for her."

Both Washington and Rodriguez would have to buy more supplies if or when their children actually return to the classroom. By Cullen's estimate, families like theirs still have about 60% of their back-to-school shopping left to do. The question is when or how much of it will actually happen.