With Fans Forbidden Due To COVID-19, A Noticeably Quiet U.S. Open Kicks Off In Queens

With Fans Forbidden Due To COVID-19, A Noticeably Quiet U.S. Open Kicks Off In Queens 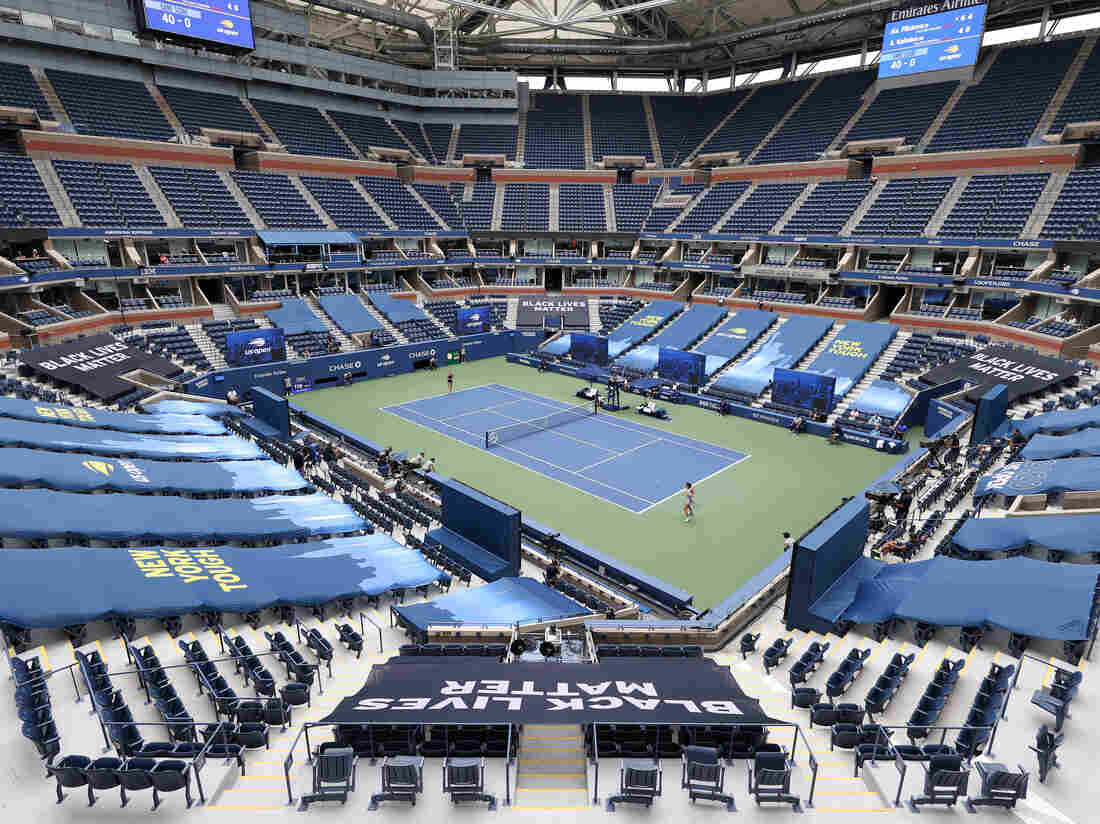 Karolina Pliskova of the Czech Republic and Anhelina Kalinina of Ukraine play their first-round match at a mostly empty Arthur Ashe Stadium on Monday. This year's U.S. Open is taking place without spectators because of the coronavirus pandemic. Al Bello/Getty Images hide caption 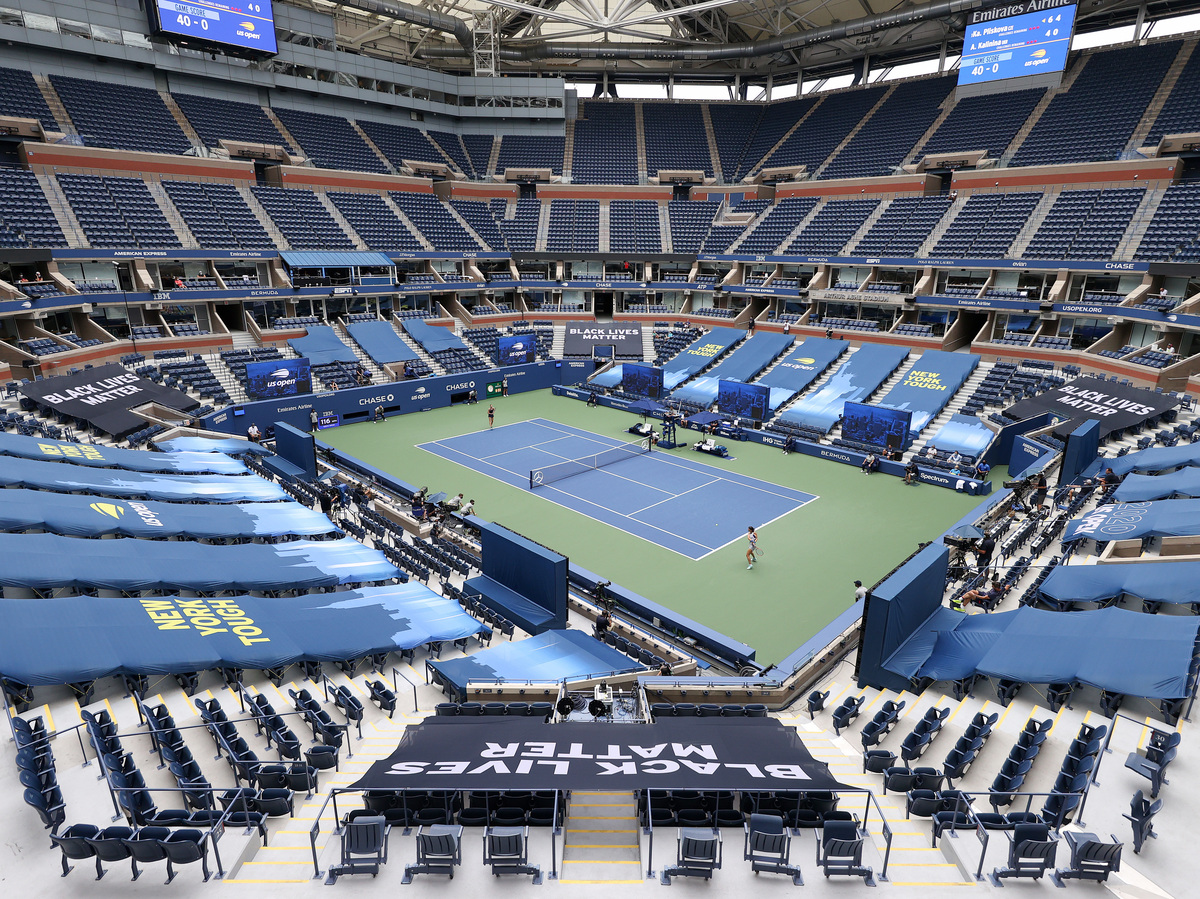 Karolina Pliskova of the Czech Republic and Anhelina Kalinina of Ukraine play their first-round match at a mostly empty Arthur Ashe Stadium on Monday. This year's U.S. Open is taking place without spectators because of the coronavirus pandemic.

The 2020 U.S. Open kicked off on Monday absent one of its most iconic hallmarks: the crowd.

Instead, the courts at the USTA Billie Jean King National Tennis Center in Queens, N.Y., were mostly silent as spectators were kept away from the stadium because of the coronavirus pandemic.

The prohibition on in-person fans is part of New York's efforts to curb the spread of COVID-19.

While New York City was once the epicenter of the virus in the U.S., New York state is now reporting a record-low positivity rate and the smallest number of hospitalizations since March. All regions are in Phase 4 of the state's reopening plan, in which most businesses and activities can operate with certain restrictions.

The U.S. Open, for which some 350 players are on-site, is following specific health and safety protocols. For instance, face masks when not on the court, social distancing and frequent testing are required.

French player Benoit Paire tested positive for the coronavirus over the weekend and has been removed from the tournament. Other players, like Rafael Nadal, previously opted out because of concerns over the coronavirus.

Areas of the tennis center that would normally host spectators have been converted into "player hospitality areas," with amenities including a gym, dining area, putting green and mini-golf course.

Still, a Grand Slam event without fans in the stands can be an eerie experience for players, particularly because of the lack of noise.

After winning her match on Monday, top-seeded player Karolina Pliskova, of the Czech Republic, said the empty stands took some getting used to.

"I think it's just about the experience of all of this, because everything is a little bit different," she said in a news conference. "But the [more] time I spend here, the better I feel."

The event typically draws tourists and helps boost the city's economy, something that will also be different this year.

United States Tennis Association CEO Michael Dowse told CNBC's Squawk Box that revenue will be down 80% this year and will rely on broadcast and sponsorship deals. He said the organization had to dig into its reserves to fund the tournament.

"We have no fans in sight, but it doesn't mean we don't have fans around the world watching this sport," Dowse said.

Last year's U.S. Open averaged 1.28 million viewers across ESPN and ESPN2, its highest average since the network began carrying the event exclusively in 2015.

Wimbledon Canceled Because Of Coronavirus

Over the weekend, several players shared their thoughts on this year's lack of spectators in a blog post on the U.S. Open website, noting that fans are an important part of the atmosphere.

"They really bring out the best game," said American player Sofia Kenin. "When it's tough moments, they obviously are there on their feet cheering for you. It's really unfortunate. I really wish they would be here."

Britain's Andy Murray said he was particularly struck by the change in tone last week while walking to the locker room after a practice.

"I was like, 'Wow, this is pretty sad,' because usually this place is just filled with energy and atmosphere, like before the tournament starts," he said. "Now it's tennis players and their teams walking around with masks on. It's just all very different and a little bit sad."

Belgian player Kim Clijsters managed to find a silver lining, saying she had never been able to watch so many live matches as she has this tournament, because there's less competition for a front-row seat.

Some of the seats at the main Arthur Ashe Stadium are, however, visibly occupied — not by fans but by the work of 18 Black and BIPOC artists who were commissioned by event organizers as part of an art installation intended to bring attention to the Black Lives Matter movement.

Painted on the seats are vibrant portraits of people of color, some accompanied by messages like "Protect Blk Women" and "E is for everybody."