Accessibility links
Coronavirus Spread At University Of Illinois Leads To Student Lockdown : Coronavirus Live Updates The college's testing program has been touted as a potential model for reopening. But a new rise in cases puts into question whether any amount of testing can make campuses safe. 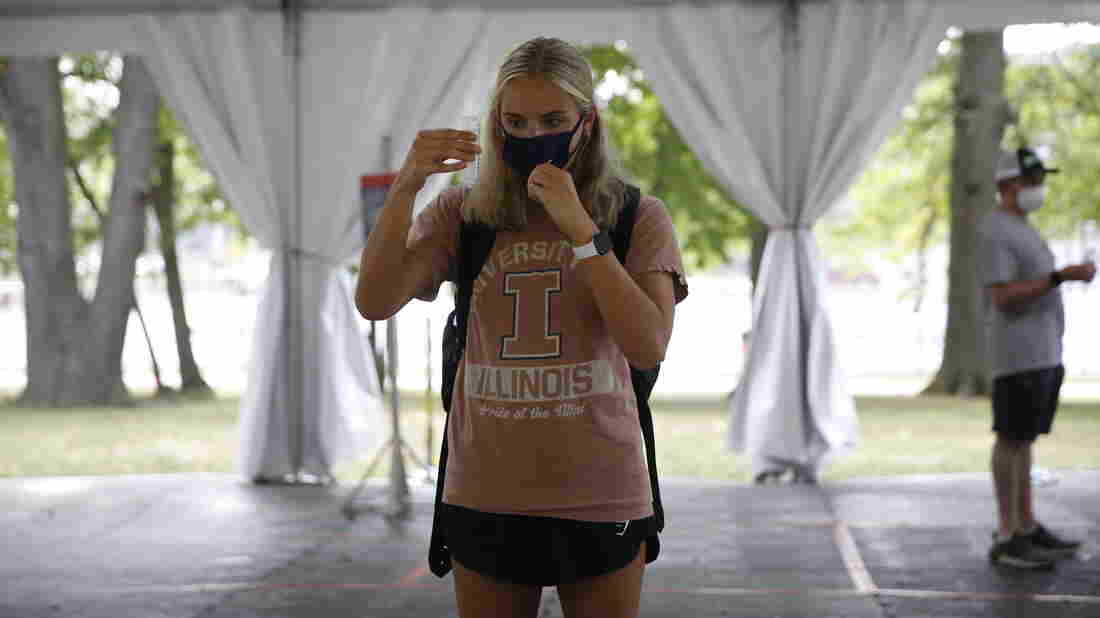 Emily Garti, a junior studying nutrition, gets her twice-weekly COVID-19 test at the University of Illinois at Urbana-Champaign. Elissa Nadworny/NPR hide caption 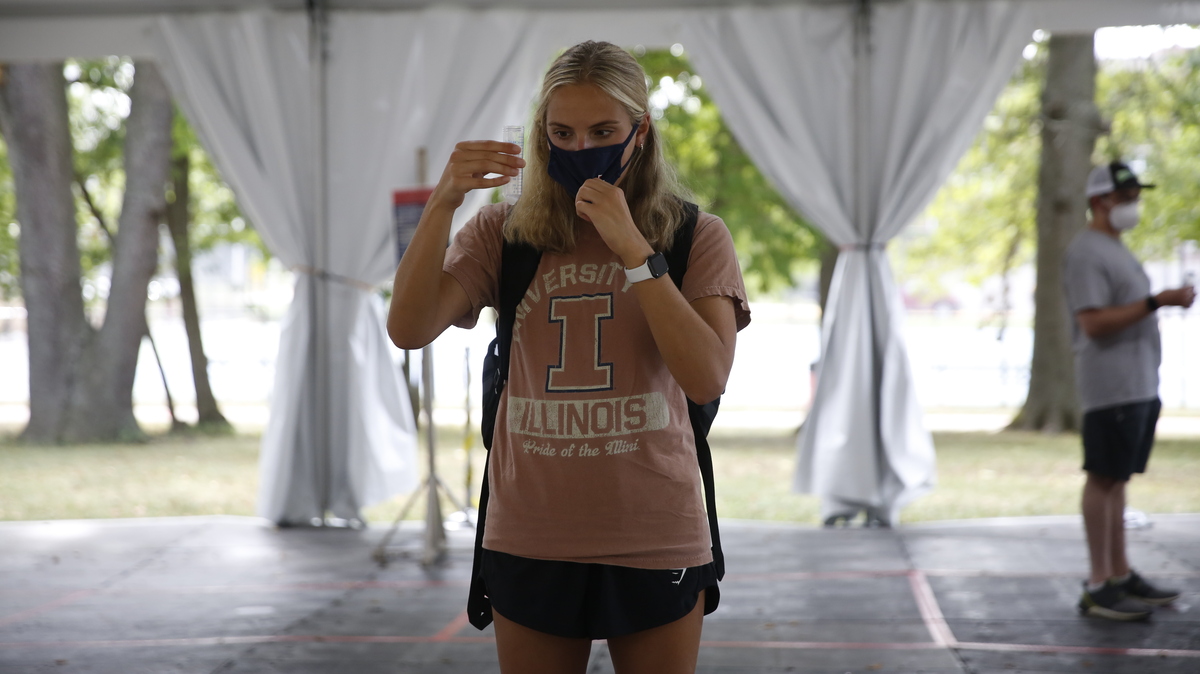 Emily Garti, a junior studying nutrition, gets her twice-weekly COVID-19 test at the University of Illinois at Urbana-Champaign.

A university that many researchers have touted as a potential model for reopening campuses to in-person classes is hitting some bumps in the road. The University of Illinois at Urbana-Champaign had implemented a mass coronavirus testing program for staff and students in an effort to keep virus spread on campus under control. But on Wednesday, the university reported rising numbers of positive coronavirus cases and announced a two-week lockdown for undergraduates.

Students were asked to avoid travel and limit in-person interactions, with exceptions for a handful of "essential activities," including mandated twice-weekly COVID-19 testing, in-person classes and grocery shopping.

The University of Illinois has one of the largest mass testing programs of any American institution. The school is conducting, on average, between 10,000 and 15,000 saliva-based tests for COVID-19 daily, at times accounting for more than 2% of all testing done in the U.S. The decision to clamp down on students' movements calls into question whether any amount of resources and safety precautions makes it safe to reopen college campuses.

To Keep Campuses Safe, Some Colleges To Test Students For Coronavirus Twice A Week

"We cannot test our way out of this pandemic," Rebecca Lee Smith, an associate professor of epidemiology and a member of the team behind the university's mass testing plan wrote on Twitter. The two-week lockdown doesn't mean the testing program failed, she wrote in another tweet: "We found a problem early, we had the data to identify the cause, and we have a chance to turn this around."

In an email to students on Wednesday, college administrators blamed the high case count on student behavior. "The irresponsible actions of a small number of students have created the very real possibility of ending an in-person semester for all of us," the email said.

"We stay together. Or we go home. It comes down to these next two weeks. It is up to you."

Emily Garti, a junior studying nutrition, says, "I was expecting an email like this to come eventually." She works for the university promoting mask wearing and social distancing on campus.

"It was just kind of a little disappointing as to how soon into our school year it did happen."

She's thinking of the next two weeks as a challenge. She says, U of I students are pretty competitive, so she's hopeful. "We've got two weeks to kind of prove ourselves ... two weeks to show that we are able to stay here."

At a press conference held over Zoom, Nigel Goldenfeld, a physics professor who contributed to the school's reopening plan, said the campus's models had already anticipated parties and people not wearing masks — but they did not take into account that students would fail to isolate, that they would not respond to local health officials' attempts to contact them or that students who had tested positive would nonetheless attend and host parties.

Preventing College Parties? Shame And Blame Don't Work, But Beer Pong Outside Might

Wednesday's letter to students called out specific cases in which students had failed to work with local health officials on contact tracing, and one instance where a student posted a video to social media attempting to show how to manipulate the campus app that tracks testing results. About 100 students and organizations are facing discipline — including suspension — for behavior over this past weekend, including for hosting parties and for breaking quarantine, according to the note sent to students.

"It sucks," says freshman Noelle Johnson, while sitting on the campus' main quad. She's not looking forward to being stuck in her dorm without air conditioning. "But I'd rather struggle for two weeks than the rest of my college years."

She's worried that if the campus can't get the virus under control, it may be years before things go back to normal. Johnson says she was aware that the University of Illinois was known as a party school before she enrolled, so she isn't surprised there have been large gatherings.

"I knew that just because we were gonna be testing a lot, didn't mean that [students] were gonna stop partying," she says. And she also isn't surprised that the university is cracking down now.

"The system can't work if the people aren't working with it."

Lauren Migaki contributed to this report.