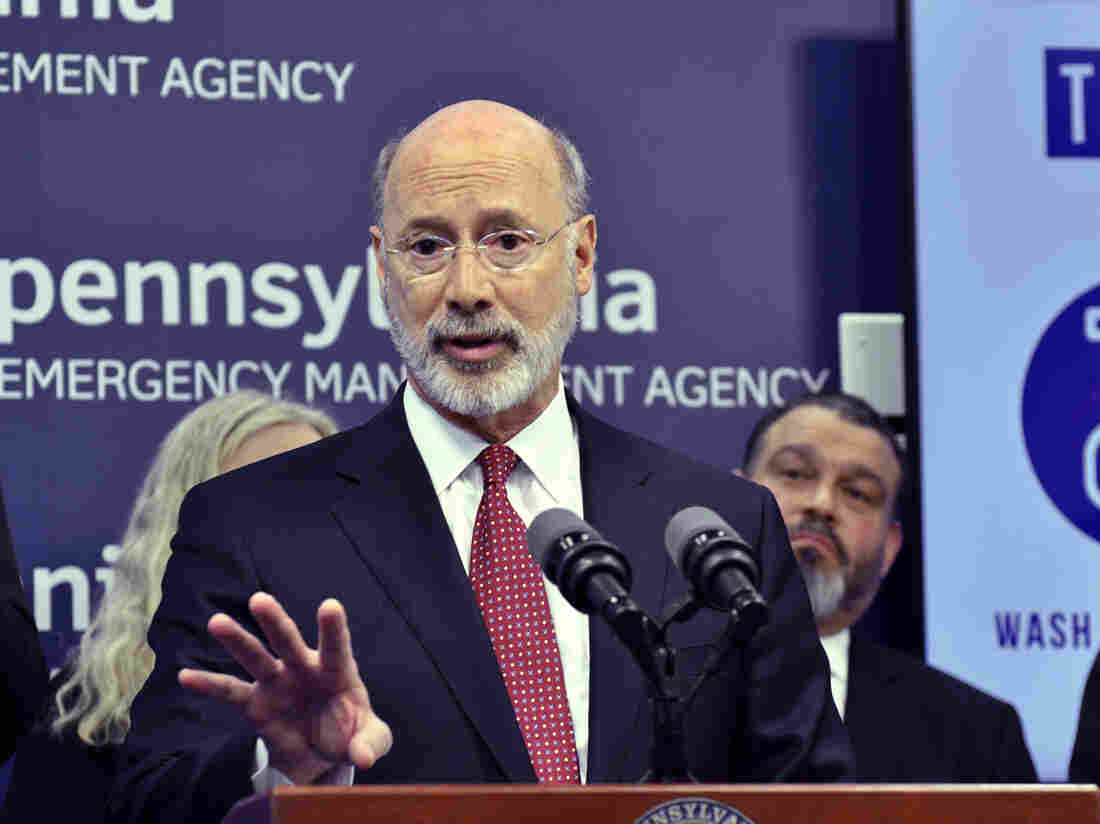 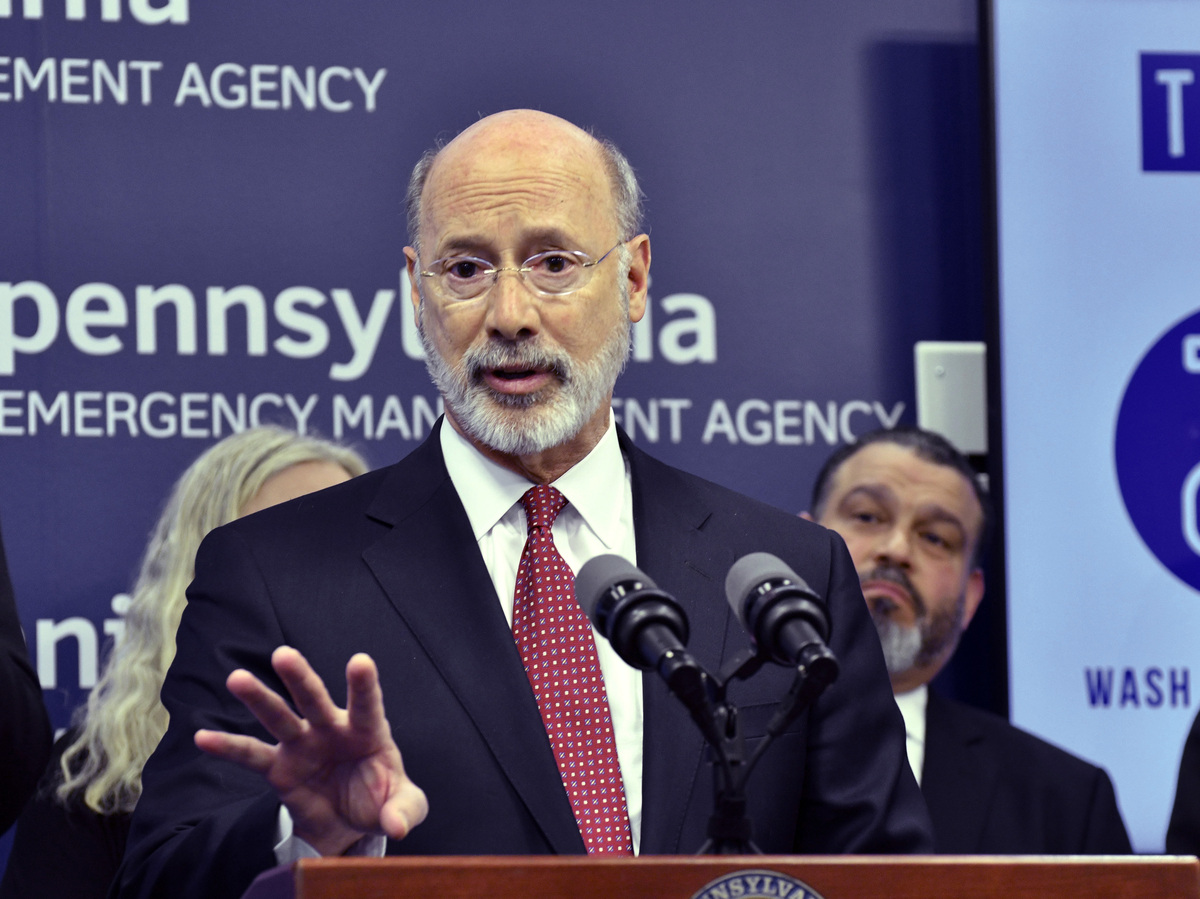 Pennsylvania Gov. Tom Wolf, pictured at a news conference in March, criticized Republicans on Tuesday for celebrating a federal judge's ruling that called some of the state's pandemic response measures unconstitutional.

"There's no sense debating a ruling that will be appealed," Wolf said on Tuesday. "But what's not up for debate is that our early and decisive action saved lives."

Plaintiffs, including four Pennsylvania counties, several Republican lawmakers and a number of local businesses, filed suit against Wolf and Dr. Rachel Levine, the state's health secretary, in May, alleging that public health orders closing businesses and requiring people to stay at home violated their constitutional rights.

Certain counties were placed under stay-at-home orders starting in March, and a statewide order took effect in April. A March 19 order required all "non-life-sustaining" businesses to close.

Those measures relaxed as counties moved through a phased reopening plan, and as of July 3, the entire state is in the green phase, where mask requirements, capacity limits and gathering restrictions remain in place.

In Pandemic, Green Doesn't Mean 'Go.' How Did Public Health Guidance Get So Muddled?

On Monday, U.S. District Judge William Stickman sided with the plaintiffs, finding the since-suspended business closure and stay-at-home orders as well as limits on indoor and outdoor gatherings were unconstitutional.

In a 66-page opinion released Monday, Stickman — who was appointed by President Trump — said that the state's actions, while taken with the good intention of addressing the public health emergency, were arbitrary and overreaching.

"The liberties protected by the Constitution are not fair-weather freedoms — in place when times are good but able to be cast aside in times of trouble," Stickman wrote. "There is no question that this Country has faced, and will face, emergencies of every sort. But the solution to a national crisis can never be permitted to supersede the commitment to individual liberty that stands as the foundation of the American experiment."

Republicans at the state and national level cheered the decision on Monday. Trump shared several tweets on the subject, writing in one that it was "great news."

And in a statement, Republicans in the Pennsylvania Senate called the ruling "validated" their position and urged Wolf to work with the General Assembly "on real solutions."

"By his own statement, the Governor has indicated that we are returning to a 'new normal' and we have long questioned his ability to do without the involvement of the legislature," they wrote. "The federal court has upheld that the laws of this country do not provide for a Governor to create his 'new normal,' rather the law [provides] for three separate but equal branches of government who have sworn to uphold the Constitution."

In prepared remarks Tuesday, Wolf sharply accused the Legislature of spreading misinformation about the virus and status of the economy as well as failing to help families and businesses affected by the pandemic.

"We need the president and the Legislature to get serious about our recovery, and that starts with being responsible about the virus," he said. "They are celebrating a court ruling while refusing to help anyone but themselves."

Wolf said that while he would have done some things differently in hindsight, he would not follow the "irresponsible" demands of the president or state Legislature. He urged Pennsylvanians to continue making responsible decisions, saying public health and economic recovery are at stake.

Levine, the health secretary, said on Tuesday that people should continue taking safety precautions regardless of the ruling.

She said existing orders on mask-wearing, mandatory telework and worker, building and hospital safety remain in effect, and the ruling does not affect occupancy limits at places such as personal care services, indoor recreation and wellness facilities, entertainment venues, bars and restaurants.

"These existing – and still valid – orders were put in place in the absence of any federal leadership at a time when life-saving decisions needed to be made," Levine said. "Saving lives has been the cornerstone of all of our decisions, including the orders referenced in the case that have since expired."

This was not the first effort to challenge the governor's actions to slow the spread of the coronavirus. In July, the state Supreme Court ruled that the Republican-controlled Legislature could not force Wolf to end his coronavirus disaster declaration.

The coronavirus is also coloring plans for the upcoming election in which many Pennsylvanians will vote by mail.

Officials are confronting growing concerns that some tens of thousands of ballots could be discarded over technicalities, including a perceived mismatch between the signatures on the ballot and in a voter's file.