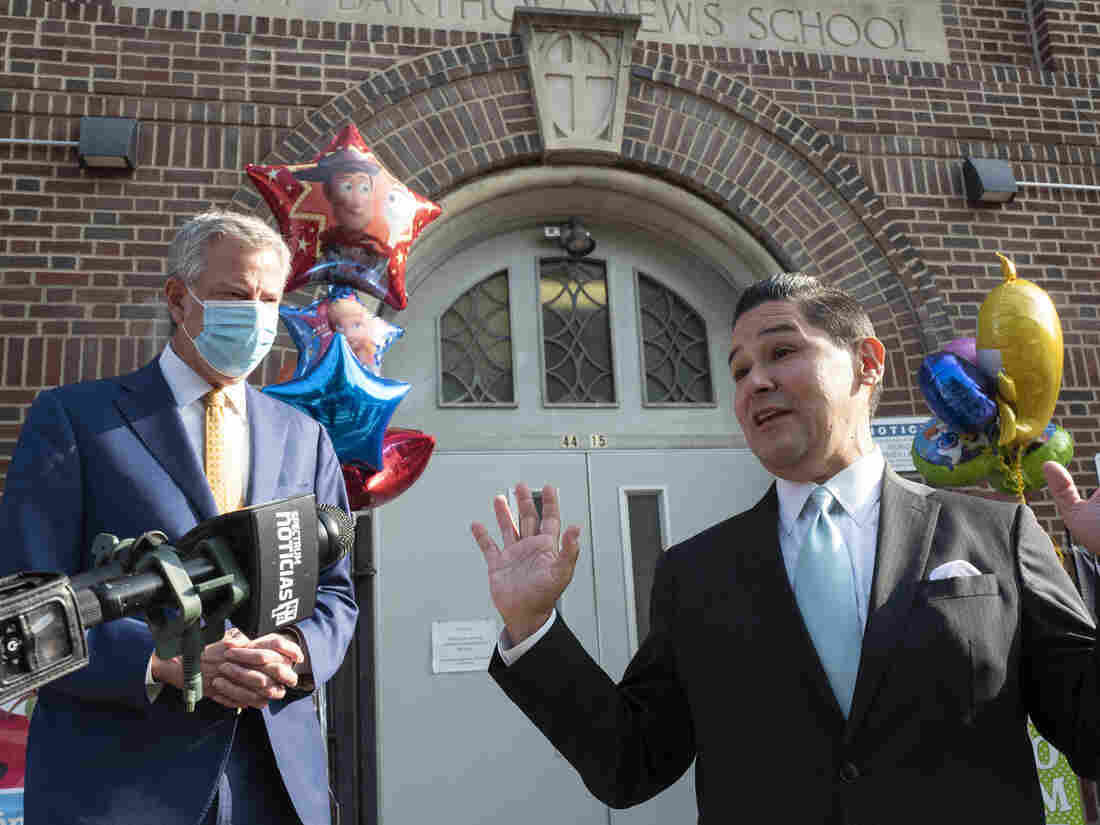 The executive board of the Council of School Supervisors and Administrators on Sunday declared a vote of no confidence against New York City Mayor Bill de Blasio, left, and Schools Chancellor Richard Carranza, right, shown outside the Mosaic Pre-K Center on Sept. 21. Mark Lennihan/AP hide caption 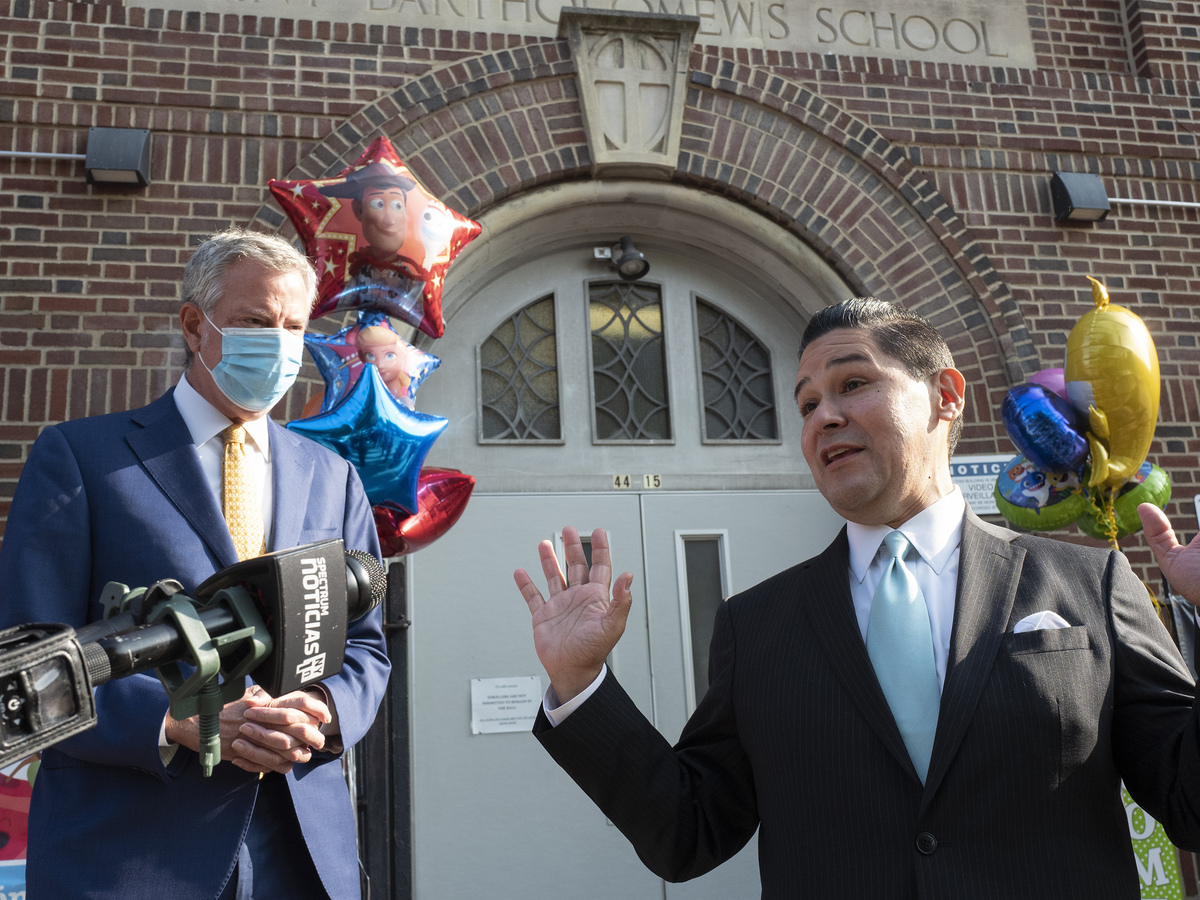 The executive board of the Council of School Supervisors and Administrators on Sunday declared a vote of no confidence against New York City Mayor Bill de Blasio, left, and Schools Chancellor Richard Carranza, right, shown outside the Mosaic Pre-K Center on Sept. 21.

The executive board of the union representing more than 6,400 of New York City's school leaders passed a unanimous vote of no confidence against Mayor Bill de Blasio and Schools Chancellor Richard Carranza on Sunday for what it called officials' "failure to lead New York City through the safe and successful reopening of schools."

The Council of School Supervisors and Administrators is calling on the mayor to cede control of the city's education department for the duration of the public health crisis, and for both officials to seek swift intervention from New York state.

"During this health crisis, school leaders have lost trust and faith in Mayor de Blasio and Chancellor Carranza to support them in their immense efforts and provide them with the guidance and staffing they need," CSA President Mark Cannizzaro said in a statement. "Quite simply, we believe the City and DOE need help from the State Education Department, and we hope that the mayor soon realizes why this is necessary."

The announcement comes just days before the much-anticipated and twice-delayed reopening of the city's public schools: In-person learning is set to begin for elementary school students on Sept. 29, and for middle and high schoolers on Oct. 1. (Pre-K students and students with disabilities could return to school starting on Sept. 21.)

The union laid out its justification in a three-page declaration provided to NPR. It includes dozens of complaints about city officials' handling of staffing, equipment and communications related to the resumption of in-person schooling.

The mayor's office did not respond to NPR's request for comment. New York City Department of Education Press Secretary Miranda Barbot said in a statement that the city has worked with its labor partners to "navigate completely uncharted waters and accomplish our shared goal of serving students" for the past six months and would continue to do so.

"This week, more kids will be safely sitting in New York City classrooms than in any other major American city — a testament to city leadership and our educators' commitment to their students, and the importance of in-person education," Barbot said.

Among the union's grievances are accusations that city officials entered into "grossly irresponsible" staffing agreements that fueled concern throughout the summer and, as of Friday, have left elementary schools some 1,200 teachers short for the first day of in-person learning.

The union says de Blasio and Carranza have not publicly stated how many additional teachers are needed by Oct. 1 or released a clear plan for providing them. It said there was a "lack of transparency" about whether the additional teachers hired by the department of education are legitimately qualified or prepared.

Several concerns are specific to remote learning, such as those saying officials have not provided schools with enough electronic devices or relevant professional development.

And others center on the timing and transparency of city officials' communications. For instance, the union said officials missed their own deadline for providing ventilation reports to school districts, did not submit their critical safety plan to the state on time and announced guidance on outdoor learning too late for school leaders to implement it.

Educators' unions have been raising concerns for weeks about the ability of the nation's largest school system to safely reopen for in-person instruction, particularly when it comes to safety, staffing and logistics.

On Friday, the United Federation of Teachers reached an agreement with the Department of Education allowing more of its members to work remotely.

The CSA said that the "last-minute" agreement, made after many schools had already been in session, means schools will not have adequate staff in the building throughout the school day.

"School leaders want school buildings reopened and have been tirelessly planning to welcome back students since the end of last school year," Cannizzaro said. "They must now look staff, parents, and children in the eye and say that they have done all they can to provide a safe and quality educational experience, but given the limited resources provided them, this is becoming increasingly difficult."