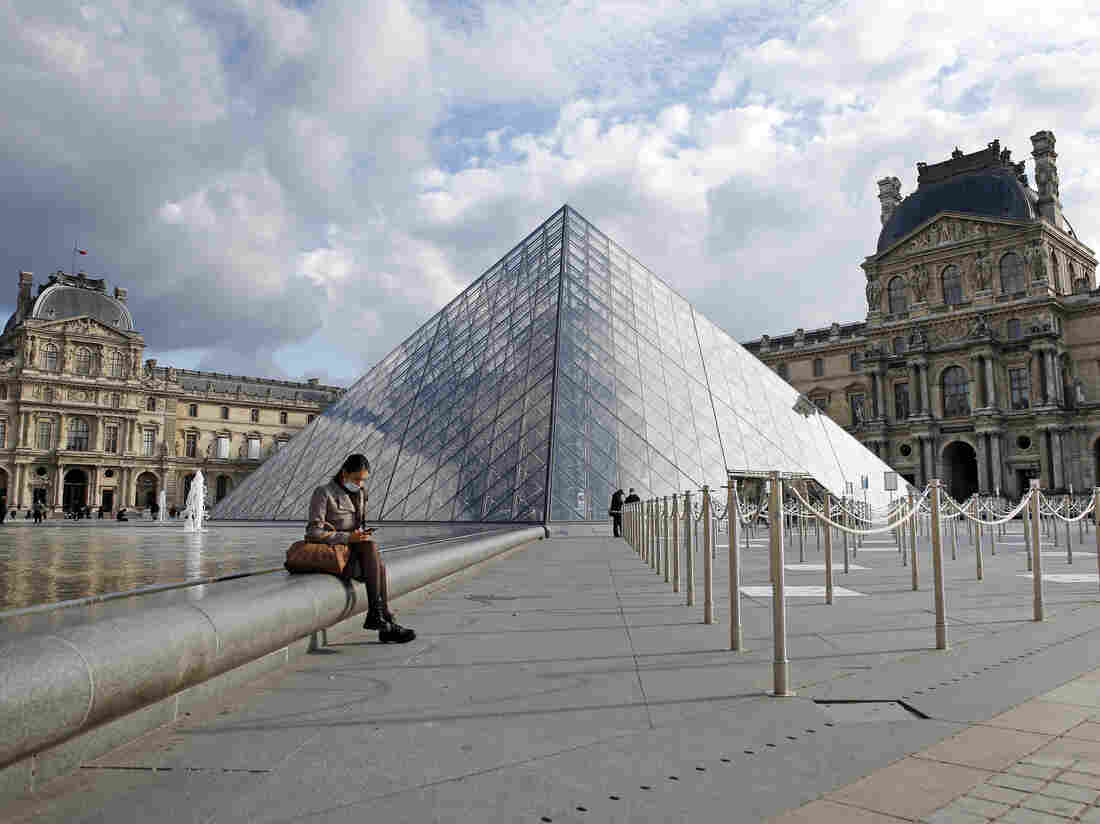 French President Emmanuel Macron is ordering nightly curfews for Paris and other large cities, hoping to control the coronavirus. A woman wears a protective face mask as she sits in the Louvre Museum's courtyard Wednesday in Paris. Chesnot/Getty Images hide caption 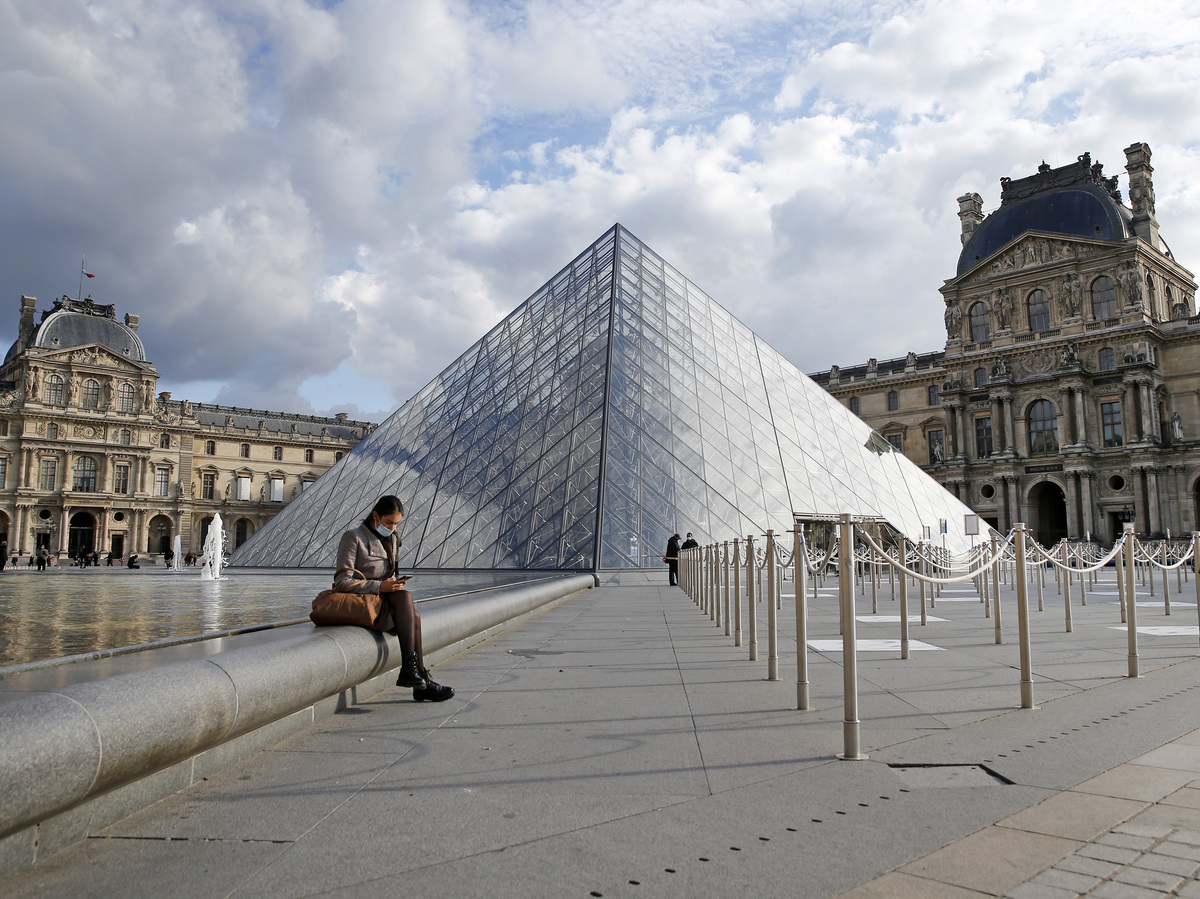 French President Emmanuel Macron is ordering nightly curfews for Paris and other large cities, hoping to control the coronavirus. A woman wears a protective face mask as she sits in the Louvre Museum's courtyard Wednesday in Paris.

Coronavirus restrictions are taking effect in the Netherlands, the U.K., the Czech Republic and other parts of Europe on Wednesday as nations try to reverse an alarming wave in new cases. The continent is now seeing more new coronavirus cases – an average of 100,000 daily — than at any other time during the pandemic.

Bars, restaurants and schools are being shut down or sharply limited, and officials are working to bolster hospital capacity, to accommodate an expected influx of new COVID-19 patients.

Europe's infection rate "has been increasing for 77 days," the European Centre for Disease Prevention and Control said in its most recent weekly report for the European Economic Area and the United Kingdom.

Here, a sampling of the situation in Europe:

In France, President Emmanuel Macron used a nationally televised interview Wednesday night to announce the start of nightly curfews in Paris and eight other densely populated areas in an effort to control the coronavirus in what are deemed "health emergency zones."

"I'm not talking about infantilizing people," Macron said, according to France24, "we're taking measures that are proportionate."

Italy reported its largest one-day total of new cases Wednesday, with more than 7,300 – easily surpassing the terrible heights the country reached in March. The rise comes one day after Prime Minister Giuseppe Conte signed a decree putting new limits on gatherings, sports and school activities. Bars and restaurants are still allowed to operate until midnight, but only if they offer table service.

In Spain, the regional government of Catalonia is ordering all bars and restaurants to close their on-premises operations, saying they can only sell to-go items for the next 15 days. Shopping areas, theaters and gyms will have to operate at reduced capacity. It's the only way to avert an even deeper shutdown, officials say.

"We are facing difficult times; we must act today to avoid a lockdown in the coming weeks," Catalan Vice President Pere Aragonès said, adding that the region's health statistics "are very worrying."

"It's the first time one of Spain's autonomous regions has taken such drastic measures to combat the pandemic since the state of emergency ended mid-June and control of the health care system went back to the regional governments," Lucia Benavides reported for NPR from Barcelona. "Under Spain's new health ministry rules, all municipalities with more than 100,000 residents that meet certain criteria must be confined. None of Catalonia's cities fall under that category – but they're not far off, and Catalan leaders say they want to prevent another lockdown."

The first and second wave of laboratory-confirmed cases of COVID-19 in the European Economic Area and the U.K., as of Wednesday. European Centre for Disease Prevention and Control hide caption

The first and second wave of laboratory-confirmed cases of COVID-19 in the European Economic Area and the U.K., as of Wednesday.

The Czech Republic, hard hit by the new coronavirus wave, has closed schools as of Wednesday. Restaurants and bars are closed for everything except takeout orders – and they can only operate until 8 p.m., according to Radio Prague International.

"With Europe's highest number of infections per capita, the Czech Republic is also canceling nonessential medical procedures to maximize hospital capacity," Esme Nicholson reported for NPR from Berlin. "The Czech Republic was quick to impose its first lockdown in March and was an early adopter of the face mask, measures which previously helped to flatten the curve."

Making matters worse, the coronavirus has infected nearly 5,000 health care workers – and in that vital sector, the number of ill staff is doubling every 10 days, Radio Prague International says.

The Netherlands is enacting a partial lockdown because of a rise in new cases. The government declared on Tuesday, "The coronavirus has been given too much room to spread again."

The restrictions close all food and drink establishments, except for carryout orders. No more than four people from different households can gather, indoors or outside.

The U.K. instituted a three-tier alert system on Wednesday that will group different regions of England under restrictions in an effort to avoid repeating a national lockdown. So far, the only region under a "very high" alert is Liverpool – where people took advantage of the last few hours before the restrictions to party in the streets.

These pictures Shame our City, attacking our brave Police Officers is unacceptable.Our Health Service is creaking,300 in Hospital&30 people dead in week 😱ignoring these facts is why we are in Tier 3 measures. https://t.co/WIW12AuAhr

"These pictures Shame our City," Liverpool Mayor Joe Anderson said via Twitter, responding to photos of the large number of people gathering in the interim between the 10 p.m. closure of pubs and the midnight onset of the new restrictions.

Noting that some people in the crowd had attacked a police car, Anderson called the violence "unacceptable."

"There is a reason our city is in Tier 3 for #Covid19," Anderson said later Wednesday. "The level of infection is at very high levels and beginning to impact on our hospitals — both for the virus and other illnesses like Cancer."