Accessibility links
CDC Reduces Consecutive Minutes Of COVID-19 Exposure Needed To Be A 'Close Contact' : Coronavirus Updates Health officials once advised going into quarantine and being tested for the coronavirus if you were near an infected person for 15 minutes. Now the rule is a total of 15 minutes in a 24-hour period. 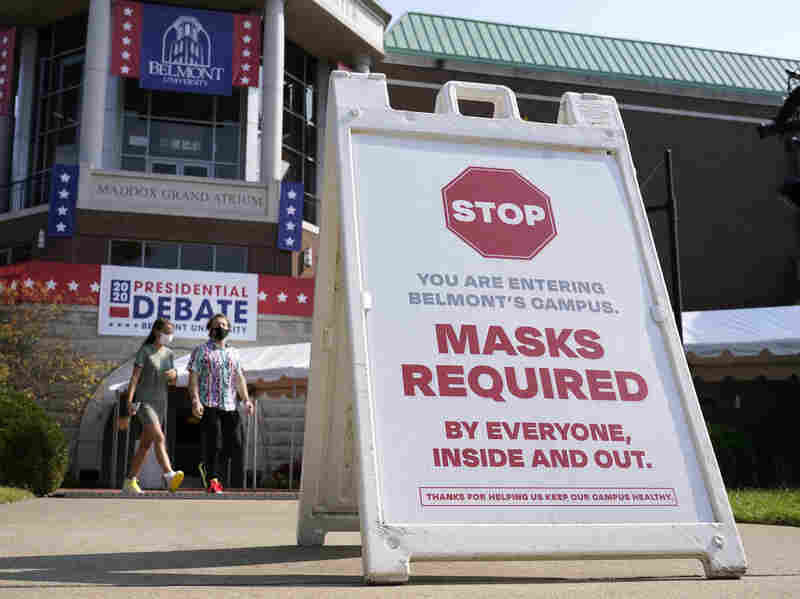 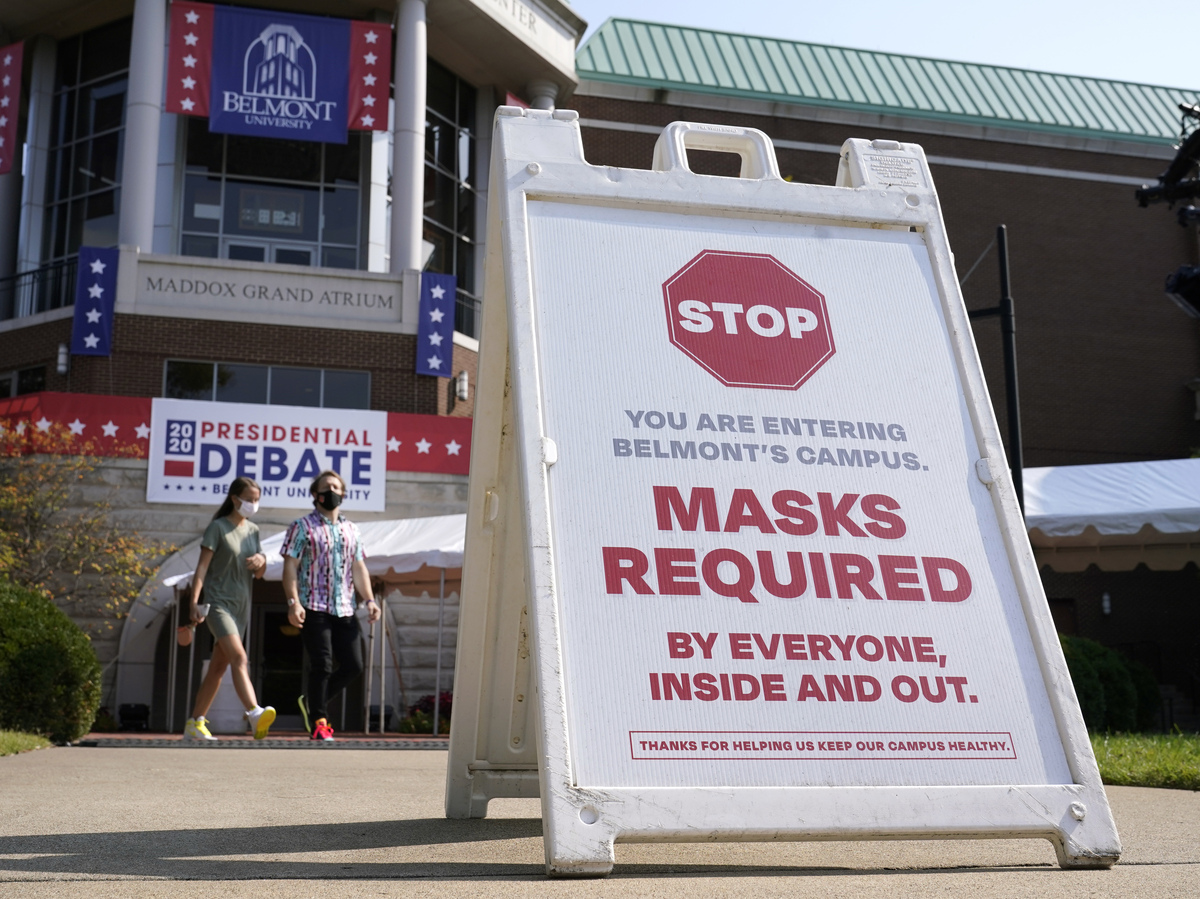 In Nashville, Tenn., a sign reminds visitors to wear masks at Belmont University, which is preparing to host Thursday's presidential debate. Federal health officials say a new study highlights the need for masks.

The Centers for Disease Control and Prevention has broadened the definition of what it means to be a "close contact" of a person with COVID-19.

Previous language defined a close contact as someone who spent at least 15 minutes within 6 feet of a person with a confirmed case.

The CDC now defines a close contact as someone who was within 6 feet of an infected person for a total of 15 minutes or more over a 24-hour period.

People who are considered close contacts are supposed to quarantine and get tested for the coronavirus.

In a study published Wednesday, the CDC and Vermont health officials found that multiple short exposures to people confirmed to have COVID-19 led to transmission of the virus.

During a contact tracing investigation detailed in the study, it was discovered that the coronavirus was transmitted to a correctional facility employee who interacted with individuals later found to be positive for the coronavirus. The employee had 22 interactions totaling 17 minutes during an eight-hour shift.

Some of the employee's contacts with those later found to have COVID-19 occurred when the individuals who were positive for the coronavirus were not wearing face masks. The CDC says the finding "highlights again the importance of wearing face masks to prevent transmission."

Epidemiologist Marc Lipsitch of the Harvard T.H. Chan School of Public Health told NPR in an email that the new definition "captures most of the instances where there would be transmission but doesn't vastly expand the number."

The change will "mostly impact workplaces, schools and other places where people spend all day together off and on," according to Caitlin Rivers, a senior scholar at the Johns Hopkins Bloomberg School of Public Health. She says it does have "the potential to significantly increase the number of people who are asked to quarantine."

"This will mean a big change for public health when it comes to contact tracing and for the public generally in trying to avoid exposure," she wrote in an email to NPR.

"The earlier standard for a significant exposure was somewhat artificial, but the purpose was to provide a target for contact tracers so that they would identify the contacts who were most at risk of infection," Watson said. "Now, contact tracing will become even more difficult because it will probably mean a much higher number of contacts per case on average."

Watson added that she was "a bit surprised that the CDC would change its definition based on one case study, especially because the case study doesn't seem to definitively show that the corrections officer was infected through these brief encounters."

"I would love to hear more from CDC about their reasoning for the change in definition, and how they would advise that public health change their operations going forward," Watson wrote.

Jeffrey Engel, senior adviser for the COVID-19 response for the Council of State and Territorial Epidemiologists, said he doubted most health departments would have the resources to do the kind of detailed case investigations needed to identify people who have accumulated 15 minutes of exposure through multiple encounters.

The Vermont case does provide new insight as to how the virus can spread, which will be helpful "going into the fall and winter," according to William Hanage of the Harvard T.H. Chan School of Public Health.

But because the new definition is based on just one case report, it shouldn't cause undue alarm, according to Marcus Plescia, chief medical officer for the Association of State and Territorial Health Officials.

"It is just a report, so I don't want to read into it too much or alarm people," Plescia wrote in an email. "Ultimately, if infection after short interactions were widespread we would see much higher infection rates."