Accessibility links
El Paso Issues New Curfew As 'Perfect Storm' Approaches With Arrival Of Holidays : Coronavirus Updates The new curfew for El Paso County, Texas went into effect just after midnight Wednesday and runs through Monday. The judge who issued the order said it was "not as rigid" as he wanted. 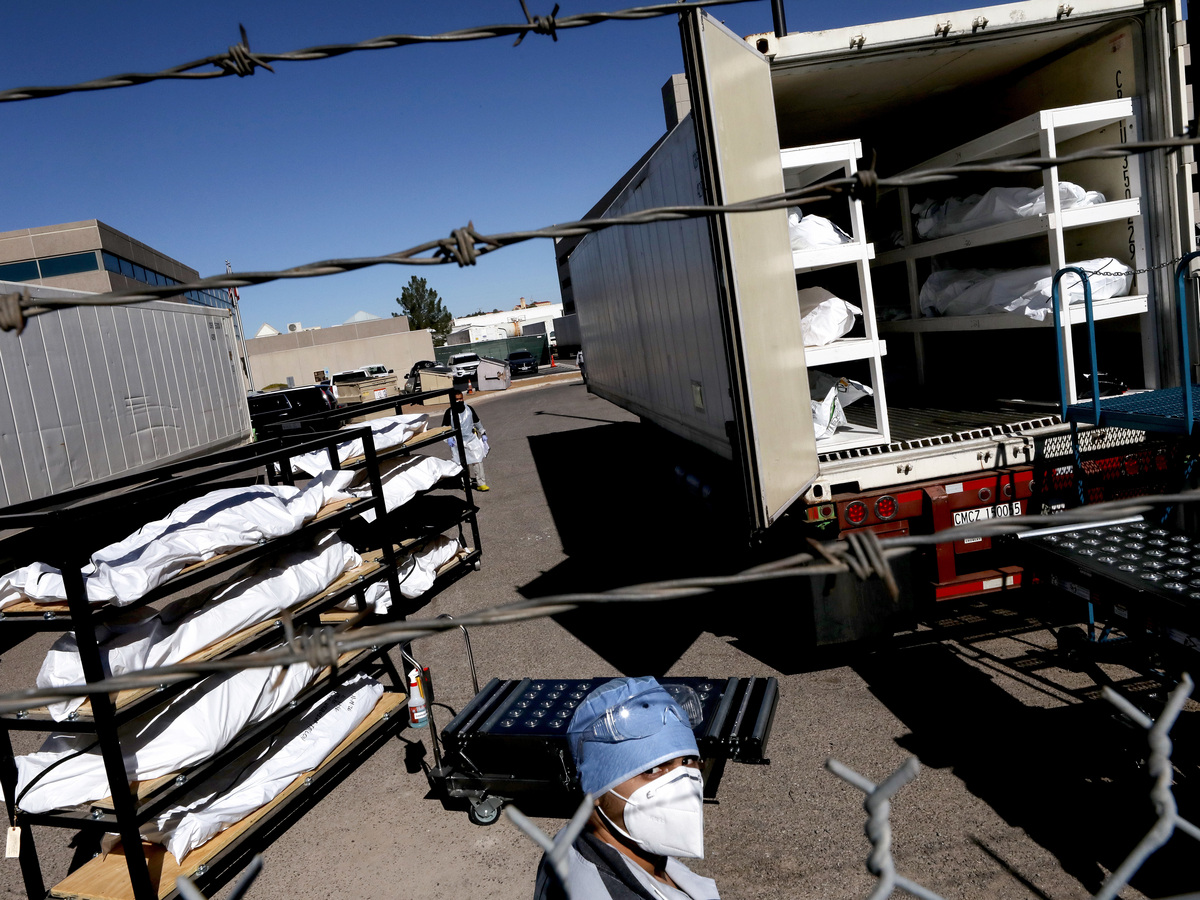 An inmate from the El Paso County detention facility prepares to load bodies wrapped in plastic into a refrigerated temporary morgue trailer.

With new coronavirus infections raging across the nation, El Paso, Texas, which has hit particularly hard by the virus, implemented a new curfew that started just after midnight Wednesday local time.

Most nonessential businesses are allowed to operate at up to 50% capacity. Restaurants in the county must stop serving in-person customers by 9 p.m., though takeout and delivery can continue after that. Bars and similar establishments will remain closed.

In announcing the curfew, El Paso County Judge Ricardo Samaniego said during a virtual press briefing Tuesday evening that the order was "not as rigid" as the one he previously sought. He said the partial curfew was put in place to curb social and recreational activities.

Strip clubs, the judge noted, can remain open and operate at 50% capacity.

"It is a shelter-at-home order. Residents are strongly urged to shelter at home," Samaniego said. "We want no more than 10 people to gather together in public or at home."

The judge acknowledged that he is not authorized to enact more stringent measures in the El Paso area, which is nestled along the U.S. border with Mexico.

"And I have respected the results at what was issued back from the Eighth Court of Appeals," he added, referencing a court decision to earlier this month blocking an order he issued to shut down nonessential businesses through Dec. 1.

The court sided with Texas Attorney General Ken Paxton and a group of local business owners who said the previous order was illegal because it went beyond an executive order issued by Gov. Greg Abbot, the Texas Tribune reports.

Samaniego said he had "a favorable discussion" with officials from both the governor's and attorney general's office before issuing the current order, which will not impact businesses operating during extended hours for Black Friday sales.

El Paso officials, however, are encouraging businesses to broaden the hours of Black Friday sales to avoid the crush of patrons trying to nab items at deep discounts.

During his remarks, Samaniego urged El Paso residents to be vigilant and to avoid the "perfect storm" as the holiday season gets underway.

Samaniego stated some sobering statistics about how El Paso is faring in the pandemic, including that 41% of hospitalizations in the county are coronavirus-related.

While that is down from 53% of hospitalizations last week, Samaniego said patients are still being cared for at the El Paso Convention Center, other tent sites and at hospitals.

He also said there were 236 bodies held at morgues and that the National Guard was assisting with what he called "fatality management."

Officials in El Paso announced they were seeking temporary morgue workers last week as the number of local deaths from the virus mounts. Inmates were also being used by the local morgue to assist with processing the deceased.

The judge also said El Paso has 10 mobile morgues, though one is not operational. Samaniego also said there are plans underway to build a temporary morgue at an undisclosed location.

He said the media briefing was "one of the final pleas" to the community "to be prudent" for the five days of the curfew and beyond.

"Are we going to be on the other side of this holiday and feel good about what happened," he asked, "Or are we in some way indirectly or directly going to contribute to a situation that is going to be much worse than it is today?"