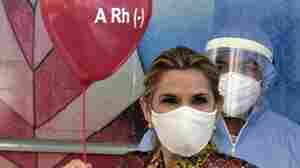 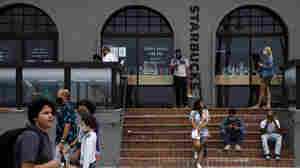 People gathered outside of a Starbucks coffee shop at Venice Beach in Los Angeles last month. The company's order for all customers to wear masks will take effect on July 15. Patrick T. Fallon/Bloomberg via Getty Images hide caption

Starbucks Says Customers Must Wear Masks At Its Cafes

July 9, 2020 • Several states already require people to wear masks in public spaces like coffee shops to slow the spread of the coronavirus, but many still have no such requirement. 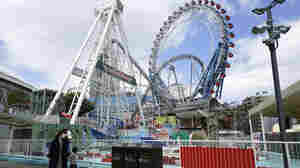 Japan's Tokyo Dome is shown before amusement rides began to reopen in the country. Japanese amusement park operators have asked people on rides at some parks not to scream. Bloomberg/Bloomberg via Getty Images hide caption

July 9, 2020 • Several park-goers have complained that the request for those on roller coasters to remain silent is unrealistic. "If a scream comes out, it comes out," one visitor said. 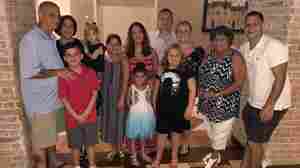 This photo from a trip last November shows the friends and family members whom Danielle Zonis (third from right) has chosen to quarantine with during the coronavirus pandemic. She started a Facebook group for others to discuss the choices they're making to stay safe. Courtesy of Danielle Zonis hide caption

Some People Agree To Disagree Over What's Safe During The Pandemic

July 9, 2020 • The coronavirus pandemic requires people to weigh risks and make choices about their activities. But there can be problems when a choice conflicts with what the people around us decide to do. 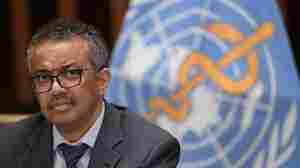 July 9, 2020 • "How is it difficult for humans to unite and fight a common enemy that is killing people indiscriminately?" WHO Director-General Tedros Adhanom Ghebreyesus asks. 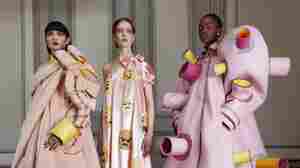 Confused? Anxious? Prickly? Couturiers At Viktor & Rolf Have You Covered

July 9, 2020 • These are troubled times and the high-concept fashion house is reflecting that in its fall 2020 collection — three mini-wardrobes embodying anger, confusion and, finally, love and hope. 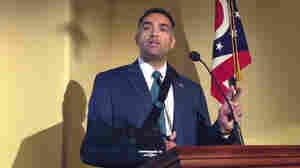 July 9, 2020 • "This is what happens when people go crazy and get tested," Ohio state Rep. Nino Vitale wrote on social media. 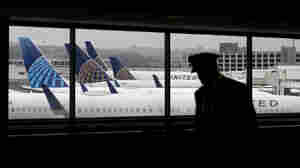 United Airlines says it plans to furlough up to 36,000 employees as the pandemic continues to batter the travel industry and much of the economy. Justin Sullivan/Getty Images hide caption

July 9, 2020 • Applications for jobless benefits are up again. "What we're seeing now is that lots more people who are unemployed are going to be unemployed for a longer period of time," economist Nick Bunker says. 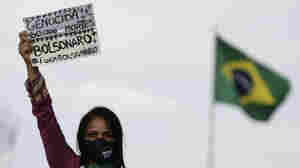 A women's movement activist holds a sign that reads in Portuguese "Genocide 60 thousand deaths, Bolsonaro out" during a protest against the government's handling of the pandemic earlier this month. Eraldo Peres/AP hide caption

July 8, 2020 • The Brazilian Press Association says Bolsonaro had unnecessarily endangered a small group of journalists who interviewed him at his official residence.

July 8, 2020 • The plan will likely put students in school twice a week. Mayor Bill de Blasio said 75% of families wanted to send their kids back to school. 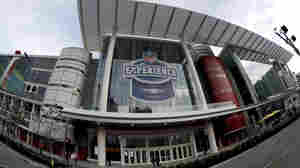 The 2020 Texas GOP convention was set to take place at the George R. Brown Convention Center in Houston, until Mayor Sylvester Turner announced it would be canceled over public health concerns. David J. Phillip/AP hide caption

July 8, 2020 • Mayor Sylvester Turner announced the move on Wednesday, as the city reported hundreds of new cases of COVID-19. 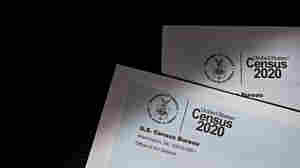 Starting July 23, the Census Bureau says door knockers will make in-person visits to households that have not yet filled out a 2020 census form in parts of Connecticut, Indiana, Kansas, Pennsylvania, Virginia and Washington. Andrew Harrer/Bloomberg via Getty Images hide caption 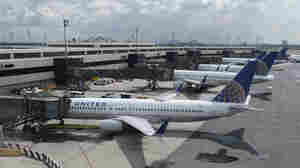 United Airlines Tells 36,000 Employees They Might Lose Their Jobs

July 8, 2020 • With bookings down and cancellations on the rise amid a surge in new COVID-19 cases, United's furloughs will be a "gut punch" to employees when federal coronavirus relief funding runs out. 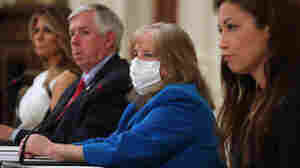 The president of the American Academy of Pediatrics, Dr. Sally Goza, attends a meeting at the White House with President Trump, students, teachers and administrators about how to safely reopen schools during the coronavirus pandemic. Chip Somodevilla/Getty Images hide caption

July 8, 2020 • The American Academy of Pediatrics says children are better off in school but that the decision to reopen cannot ignore spiking infection rates. 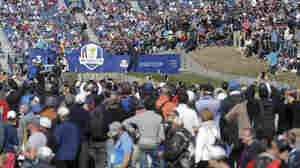 Tiger Woods tees off at the 2018 Ryder Cup in France. The biennial tournament, previously scheduled for this year, has been postponed to 2021. Tom Jenkins/Getty Images hide caption

July 8, 2020 • Organizers announced on Wednesday that the Ryder Cup will be held in September 2021 instead of the initially scheduled 2020 date. It is the first postponement of the event since Sept. 11.