Accessibility links
Tales of the Nerd, Stink-Bug, Ho and Other Vehicles : Daydreaming We asked listeners what their cars mean to them. These are some of the highlights.

Tales of the Nerd, Stink-Bug, Ho and Other Vehicles

Tales of the Nerd, Stink-Bug, Ho and Other Vehicles

Last week, we asked listeners to tell us what their cars meant to them. Whether it's the ride Mr. Jalopy calls "Sister Golden Hair Surprise," or what one listener has dubbed "Leopard Bernstein," Americans don't just love their cars, they love personalizing them. Take a look: 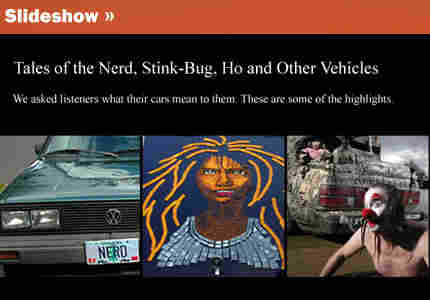 Judging from the admittedly unscientific survey above, the right to customize is one of the privileges of ownership. As Celeste Headlee's segment about "makers" points out, though, Americans are increasingly "buying" products that they can't customize or modify. What if Detroit sold cars that came with fine print saying the owner (so-called) couldn't change the color, or build a giant, terrifying waterfall on the trunk the way Extermo the Clown did? A basic piece of Americana would disappear.

Fortunately, that's not the case -- yet -- so enjoy the gallery. Many thanks to everyone who sent us photos and stories! We got quite a few submissions, more than we could feature today, and we'll be sharing additional images and stories on the blog in upcoming weeks. In the meantime, tell us what you think about this first batch.