Accessibility links
Can Fiction Work On The Radio? : Daydreaming This week, our experiment in radio fiction made listeners laugh, cry and lob major insults. 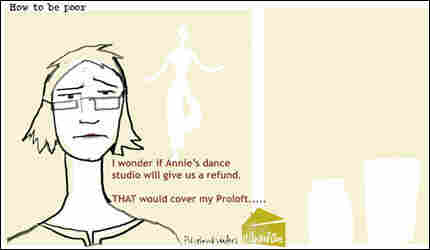 Every day this week, we are airing a radio comic on the show, which explores a "middle class" family's experience in the changing economy. This little experiment in radio fiction has led us to be simultaneously accused of creating "the most annoying thing I have heard on NPR" and credited with airing a "brilliant glimpse into the lives" of a struggling family that is "not only intelligently written but also incredibly witty."

The first question is probably this: Why are we using a fictional family to tell the story of the economic downturn? In the past NPR has employed fiction to mixed reviews. A version of Star Wars produced decades ago was a big hit as was a re-enactment of War of the Worlds in the mid-90s. But including a radio "comic strip" on news magazines has been somewhat less popular. There was one on Weekend Edition Saturday and another on Morning Edition that listeners weren't so happy to hear.

So why risk it? Because fiction can be an effective way to explore very real events in our society — to get at it in a way that other financial stories and actual interviews (which we always have many of) don't.

This was the case for listener A. Paige, who wrote — in response to Tuesday's comic — that "I found myself laughing and crying at the same time."

Just as in print-magazines such as The New Yorker, Harper's, and The Atlantic Monthly, fiction can fill gaps and add a new dimension to current events in our radio magazine, Day to Day. I think of some fun 2 Minute Noirs aired on this program from time to time.

Could it be though, that some subjects are best left untouched by comedy?

"Though I really enjoy Day to Day's approach to the news, this series fails to amuse or inform me," wrote listener Pat Morris. "I think it's too serious a matter and traumatic for people who lose their jobs and homes. There is just no humor in the subject. Perhaps you should re-think this series?"

Do you agree? Is there is something to be gained from using fiction on the radio to address real-life events. Should we keep going with 2 Minute Noir and this week's, 11 Central Ave.? Or it time to say goodbye to fiction on Day to Day?