Accessibility links
Madonna (Inn) At Fifty : Daydreaming Madonna at 50. The Madonna Inn, that is. Visit a slice of Americana on California's Central Coast. 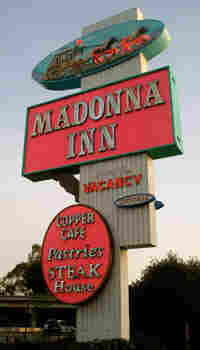 On Christmas Eve, 1958, Alex and Phyllis Madonna opened a little motel in San Luis Obispo, California with 12 rooms. Rather than giving the rooms numbers, they gave them names, and decorated them all differently, each one representing a theme. They wanted to create something different. Boy, did they succeed!

In a style that could be described as Swiss Chalet meets Disneyland, the Madonna Inn was an almost instant hit with tourists, who might stop in San Luis Obispo as they traveled down Highway 101 on their way to Los Angeles or San Francisco. Over the years, Alex and Phyllis added to their labor of love. They hired craftsmen from Europe, local stoneworkers, and a staff that was, according to Phyllis Madonna, "our extended family." By the 1960's the Madonna Inn had over 100 rooms, a coffee shop with a copper-covered bar and and an ornate lobby filled with hand-carved wood and statues. 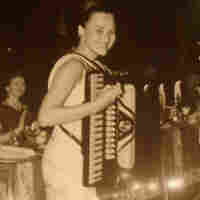 The Inn attracted celebrities along with regular folk, and the dining room is lined with pictures of the famous and powerful - actors, singers and politicians who visited. Back in the day, Phyllis Madonna would entertain guests by playing the accordion and singing. Now eighty, she says the big instrument is a little too unwieldy and heavy for her to play. 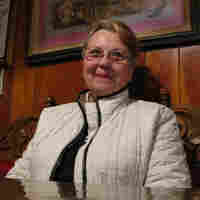 But she still sings, as she did for us when I visited the Inn with Americana expert Charles Phoenix. Her husband Alex died four years ago. Now, Phyllis has turned over the day to day operations to her children. But you can still find her most days in her booth in the Copper Cafe, chatting with old friends and visitors.

Charles says the handbuilt quality of the Madonna Inn makes it a unique complex that could never be duplicated today. "No one could afford to pay for all this detail today," he says. 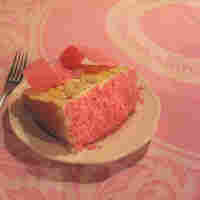 The Inn is known for it's signature hot pink. The dining room is done up in pink. The big sign out by the highway is pink. And the favorite dessert at the Madonna Inn is the pink champagne cake.

But it's really the theme rooms that make the place special. Take a look here to see a full list of the rooms, and pictures of most of them.

Alex Madonna owned a heavy construction company, and because he loved rocks, many of the rooms feature huge boulders. Some are made entirely out of rock. Every room is different. Every one is a flight of fancy and an expression of the love, care and devotion the Madonna's had for their enterprise.

As it turns 50, the Inn is still going strong, with occupancy rates holding steady, even in the face of a recession. There's a new pool and spa up on the hill, but otherwise, the place remains a slice of mid-century America. And it remains a perfect place to get away from it all for a little while, and just enjoy the outrageous magic and imagination of Alex and Phyllis Madonna.