Accessibility links
Will Democrats Pack The Supreme Court In Response To A Trump Appointment? : Death Of Ruth Bader Ginsburg Some Democrats are open to packing the Supreme Court in response to what they perceive as an illegitimate court appointment. But the move could cause a "spiral" of retaliation, experts say. 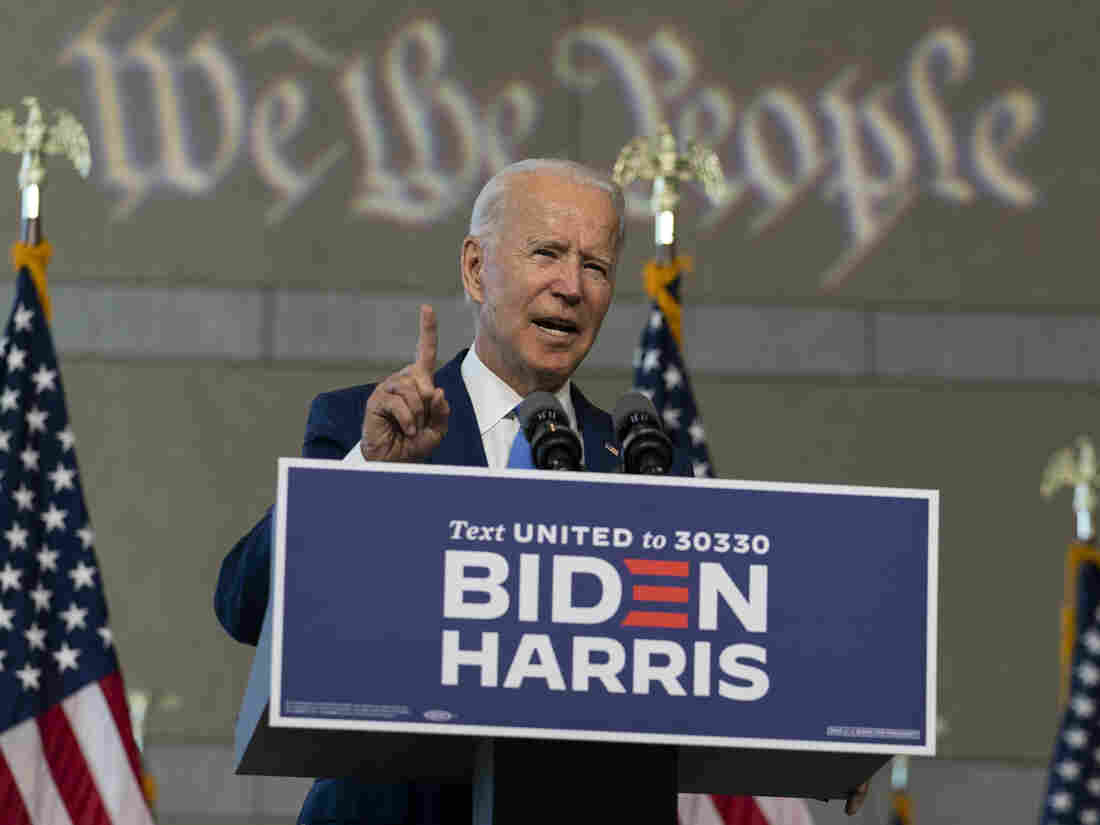 Democratic presidential candidate Joe Biden speaks about the future of the Supreme Court on Sunday at the National Constitution Center in Philadelphia. Carolyn Kaster/AP hide caption 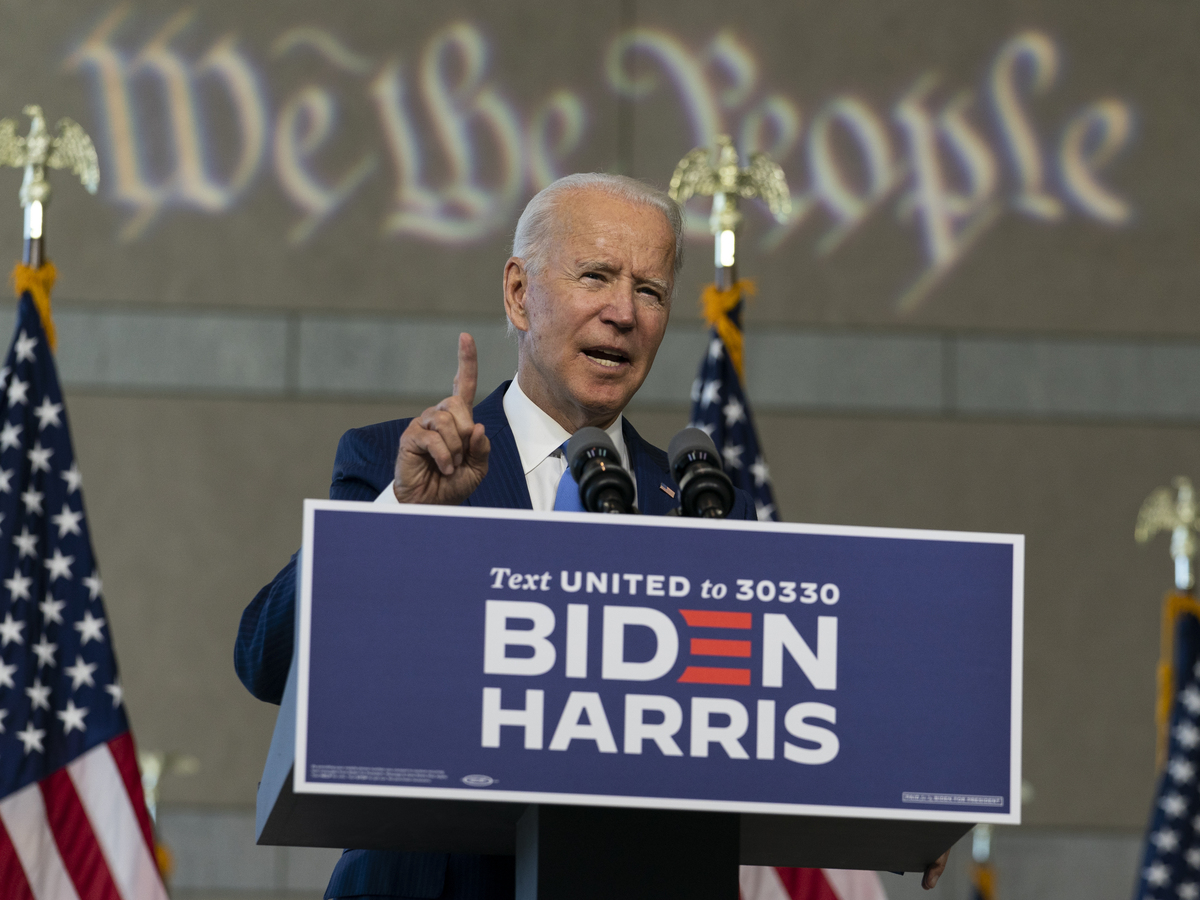 Democratic presidential candidate Joe Biden speaks about the future of the Supreme Court on Sunday at the National Constitution Center in Philadelphia.

With President Trump soon to nominate a replacement for Justice Ruth Bader Ginsburg on the Supreme Court, some Democrats are returning to an idea that hasn't been seriously proposed since the days of Franklin D. Roosevelt: increasing the number of justices on the Supreme Court.

Democratic leaders have long rejected the idea of packing the court, in large part due to fears of Republican retaliation. But with Ginsburg's death — and what many see as Republican hypocrisy in calling for a vote now after they refused to hold a hearing on Merrick Garland during the last year of Barack Obama's presidency — the once radical idea has started to gain traction.

The Supreme Court has had nine justices for more than 150 years. But the Constitution doesn't require nine; the number is set by Congress. And leading constitutional scholars told NPR that if Republicans do push through a new justice and then lose the Senate and presidency in the upcoming election, Democrats will face tremendous political pressure from the base to pack the courts.

Democratic presidential nominee Joe Biden hasn't commented publicly on expanding the court since Ginsburg's death. But he previously dismissed the idea, warning of reprisal if and when Republicans regain control.

"I'm not prepared to go on and try to pack the court, because we'll live to rue that day," he told Iowa Starting Line early in the primary race last year. A few months later, during a Democratic primary debate, Biden once again rejected the idea. "I would not get into court packing," Biden said. "We add three justices. Next time around, we lose control, they add three justices. We begin to lose any credibility the court has at all."

In remarks Sunday on the future of the Supreme Court, Biden did not discuss court packing. And on Sunday morning, House Speaker Nancy Pelosi demurred when asked whether a Democratic majority would consider expanding the court as reprisal for a late-term Trump appointment.

But other Democrats have been less reticent. "Mitch McConnell set the precedent. No Supreme Court vacancies filled in an election year," Sen. Ed Markey of Massachusetts wrote Friday. "If he violates it, when Democrats control the Senate in the next Congress, we must abolish the filibuster and expand the Supreme Court."

Even before Ginsburg's death, several Democratic presidential hopefuls had said they were open to the idea, including Sens. Cory Booker of New Jersey, Kirsten Gillibrand of New York, Amy Klobuchar of Minnesota, Elizabeth Warren of Massachusetts and Kamala Harris of California, now the vice presidential nominee.

To University of Chicago law professor Brian Leiter, the current Supreme Court makeup is already evidence of court packing. "The Republicans packed the court after Scalia's death when they denied President Obama his choice," Leiter told NPR. "Now they want to pack it further and more consequentially, given that they would appoint a conservative to replace the liberal Ginsburg. If they pack the court, the Democrats would be crazy not to do their own court packing."

Other academics agree that Democratic court packing is likely. "If the GOP goes forward with trying to fill the seat this year regardless of the election result, I think there is a substantial likelihood (at least 50% or more) that the Democrats will respond with court-packing, the next time they get a chance to do so," George Mason University law professor Ilya Somin said via e-mail.

But court packing would be a "terrible idea," Somin warned, "as it would lead to a spiral that undermines the institution of judicial review." It would also open the door for Republicans to respond in kind. "I don't see any likely way of avoiding the spiral, once one party has passed a court-packing bill once," he said.

Expanding the court isn't the only way to respond to what Democrats would perceive as an illegitimate election-year appointment, however. In a paper authored this year by Yale Law School professor Samuel Moyn and University of Chicago law professor Ryan Doerfler, the two suggest several options to overhaul the court by reducing its power.

The authors said lawmakers could require a Supreme Court supermajority for some decisions, so that major federal statutes aren't invalidated by a simple 5-4 ruling. Congress could also insulate specific legislation from judicial review — known in legal circles as "jurisdiction stripping."

These changes "would shift important policy disputes from the judicial arena to the small-d democratic one, thereby substantially reducing the importance of which party has effective control of the courts," Doerfler told NPR.